Shares of TAL Education Group (NYSE:TAL) have been assigned a consensus rating of “Hold” from the eighteen brokerages that are presently covering the firm, MarketBeat.com reports. Six research analysts have rated the stock with a sell rating, eight have assigned a hold rating and three have given a buy rating to the company. The average 1-year price objective among brokerages that have updated their coverage on the stock in the last year is $41.64.

TAL Education Group operates as a holding company, which through its subsidiaries, engages in the provision of after-school tutoring programs for primary and secondary school students. Its services are delivered through small classes; personalized premium services, such as one-on-one tutoring; and online course offerings for primary and middle school students.

Further Reading: How prevalent are 12b-1 fees? 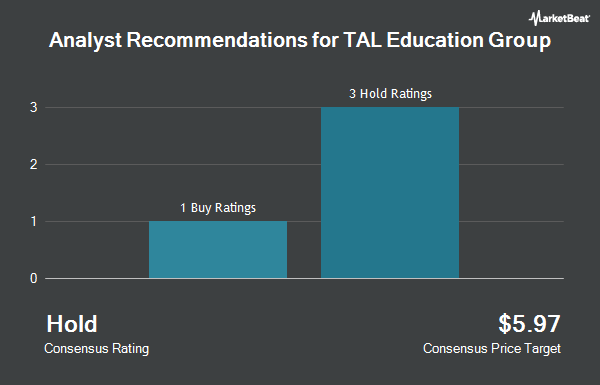 Should you invest $1,000 in TAL Education Group right now?

Before you consider TAL Education Group, you’ll want to hear this.

MarketBeat keeps track of Wall Street’s top-rated and best performing research analysts and the stocks they recommend to their clients on a daily basis. MarketBeat has identified the five stocks that top analysts are quietly whispering to their clients to buy now before the broader market catches on… and TAL Education Group wasn’t on the list.

While TAL Education Group currently has a “Hold” rating among analysts, top-rated analysts believe these five stocks are better buys.