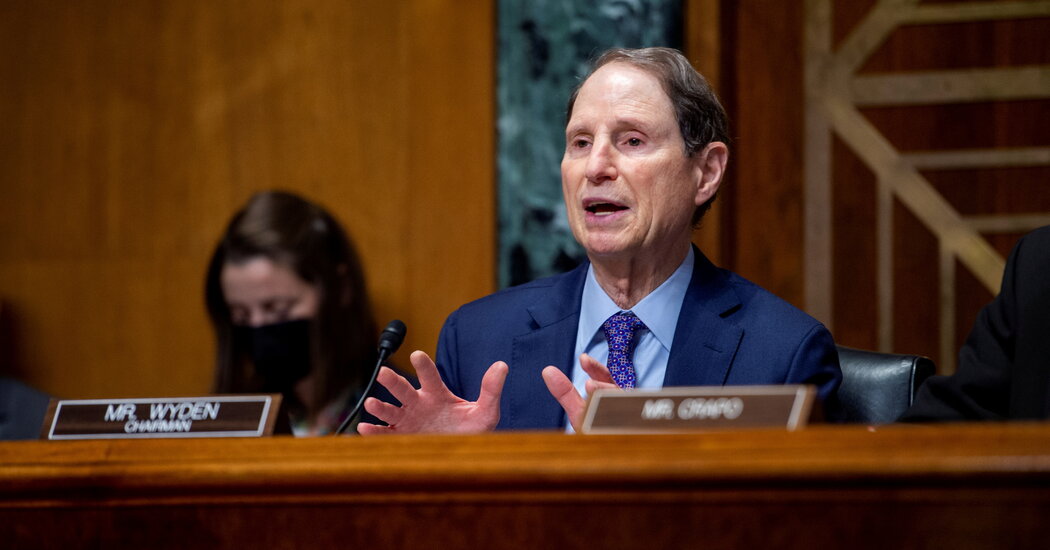 Billionaires on the hook?

As Democrats race to find ways to pay for President Biden’s social spending plans — particularly as one of their own, Senator Kyrsten Sinema of Arizona, blocks efforts to raise corporate and individual tax rates — they’re increasingly turning their eyes to a different kind of tax.

Billionaires could be taxed on unrealized capital gains on their liquid assets, Democratic officials said yesterday. It would affect people with $1 billion in assets or those who have reported at least $100 million in income for three consecutive years, according to news reports. That would ensnare perhaps 700 taxpayers — or the wealthiest 0.0002 percent — but Democrats hope it would generate at least $200 billion in revenue over a decade. It would cover not only stocks, but also other assets like real estate. (Individuals could claim deductions for annual losses in the value of their assets.)

The idea has been around for a while. Senator Ron Wyden, the head of the Senate Finance Committee, who is expected to unveil the proposal this week, has been working on various versions of the plan for two years. And Senator Elizabeth Warren pushed a more sweeping version of an unrealized capital gains tax during her presidential run. “Raising the rate is not going to cause Jeff Bezos to pay a penny more,” Warren told MSNBC yesterday. “What we need is a tax that focuses on the wealth of the richest Americans.”

But it faces plenty of challenges. Republicans, who have long opposed taxing unrealized gains, argue that it would create enormous bureaucracies and would be hard to implement. It’s also not clear that every Democrat would be on board with such a move — and, with razor-thin majorities in Congress, every Democratic vote would be needed if Biden and his allies hope to pass their spending plans along party lines.

PayPal gives up on a Pinterest takeover. The digital payments giant said it’s not pursuing a deal, which people briefed on the matter had said could have been worth $45 billion. While Pinterest shareholders appeared supportive of a deal, PayPal investors were decidedly cooler on the idea, based on the companies’ recent stock performances.

Another tough day for Facebook. Frances Haugen, the former product manager who has shared thousands of pages of internal company documents with journalists, is set to testify before Britain’s Parliament today as part of a European tour. Meanwhile, more news is emerging from leaked documents, including that Facebook employees were aware that their platform was being used to spread misinformation and hate speech in the U.S. and India.

Moscow is accused of launching a new cybersurveillance campaign. The Russian intelligence agency behind the SolarWinds hack has begun a broad new effort to target thousands of U.S. government, corporate and think-tank computer networks, Microsoft officials and cybersecurity experts warned. Its apparent focus is stealing data stored in the cloud.

Citigroup agrees to a racial equity audit. It will become the first major bank to ask outsiders to examine whether its business policies contribute to racial discrimination. While others like BlackRock have agreed to such self-examinations amid pressure from investors following the 2020 racial justice protests, other Wall Street firms have called these audits unnecessary.

The fate of the world’s oldest bank grows cloudier. UniCredit said last night that it was abandoning its effort to acquire Italy’s troubled Monte dei Paschi di Siena after negotiations with the Italian government collapsed. That has left Rome to come up with complex alternative measures ahead of a Dec. 31 deadline.

FaZe Clan, the e-sports conglomerate, announced today that it will go public by merging with a SPAC, in a deal that values it at about $1 billion. Founded in 2010, FaZe Clan is an influencer marketing agency, e-commerce company and e-sports team all in one. (The company’s C.E.O., Lee Trink, once described it as “Dallas Cowboys meets Supreme meets MTV”). It will be one of the first prominent e-sports companies to go public — and it‘s likely to draw attention from the retail traders who helped fuel the SPAC frenzy.

FaZe wants to combine sports, media and marketing. Trink is a former Hollywood entertainment manager who worked with Kid Rock. The company’s 85 influencers, who live together in its California gamer compound, produce viral social media clips, compete in professional gaming leagues for money and accolades, and foster a devoted fan base. FaZe has built on that following by launching an online store and branded merchandise and signing advertising deals with the likes of Burger King.

“We didn’t spend that much time really ideating on a traditional I.P.O. strategy,” Trink said in an interview, noting that a SPAC deal allows FaZe Clan to talk about future opportunities as it prepares to go public, while a traditional I.P.O. would not. FaZe, which isn’t profitable, brought in about $38 million in revenue last year and expects to report more than $50 million this year. Trink said FaZe will use the SPAC to “double down” on content.

“This is the beginning of gaming’s further ascent into the cultural zeitgeist,” he added. The $176 billion video game industry exploded during the pandemic, although some worry sales may slow as the pandemic eases. E-sports is expected to become a billion-dollar business this year; already, the e-sports team Evil Geniuses received an investment from China’s Fosun Sports Group that valued it at more than $250 million.

A “make or break” moment for climate change: COP26, the annual climate summit hosted by the United Nations, begins next Sunday in Glasgow. At what the meeting’s president called a “make or break” moment for fighting climate change, world governments will meet to work out new targets for cutting carbon emissions. But major carbon emitters like China, Australia, Russia and India have yet to submit their new pledges for curbing their pollution.

More vaccines: On Tuesday, an F.D.A. advisory committee is expected to discuss emergency authorization of the Pfizer vaccine for children ages 5 to 11. The White House has said it is ready to quickly roll out vaccines for children if they are authorized by the F.D.A. and the C.D.C.

The state of the economy: The Commerce Department on Thursday will publish data on gross domestic product in the U.S. Economists expect the report to show that economic growth slowed over the summer, to about 0.9 percent in the third quarter. They’ll look for evidence that supply-chain disruptions and labor shortages are constraining the recovery and pushing up inflation.

Speaking of supply chains: Corporate financial reports this week may shed new light on the severity of pandemic-driven global supply shortages, which have affected everything from cars to iPhones and contributed to inflation. G.E. and Microsoft report tomorrow; Coke and G.M. on Wednesday; and Amazon, Apple, Anheuser-Busch InBev and Ford Motor on Thursday. Meanwhile, you may want to get started on your holiday shopping.

“I’m behind on bills, all because the pay team messed up. I’m crying as I write this email.”

— Tara Jones, an Amazon warehouse worker, in an email last year to then-C.E.O. Jeff Bezos. The email set off an internal investigation that found Amazon had been shortchanging new parents, patients dealing with medical crises and other vulnerable workers on leave.

While corporate America has pledged to go greener, the systems behind the most popular cryptocurrencies, Bitcoin and Ether, are energy-intensive by design. This has created an image problem for crypto, leaving the industry to scramble for a solution.

“Urgent progress is needed towards decarbonization” was the conclusion of a new report by sustainability researchers and crypto industry players including the Cambridge University Centre for Alternative Finance, the Green Bitcoin Project and Digiconomist. But, the report added, the currently available data “is not widely understood, and can be taken out of context.” Because crypto’s carbon footprint is “a partisan and highly emotive issue,” the information and debate surrounding this topic has not been “open and reasoned.”

This is primarily a Bitcoin and Ethereum issue, according to Alex DeVries, the founder of Digiconomist who studies crypto’s energy consumption. “The impact these two have reflects poorly on the rest of the cryptocurrency landscape,” he said in a statement. Greening crypto is relatively easy, at least on a technology level, the report’s authors say, and other parts of the cryptocurrency community have worked to address the issue.

Best of the rest

We’d like your feedback! Please email thoughts and suggestions to dealbook@nytimes.com.