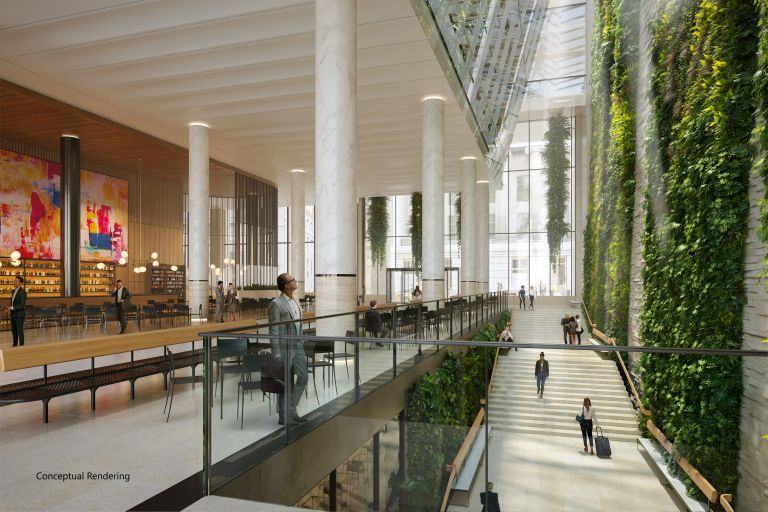 One by one, the big names in finance have either shrunken their footprint in Manhattan’s Financial District or exited the neighborhood altogether — JPMorgan Chase, Citigroup and Bank of New York, etc. Now, next year Deutsche Bank is due to leave its longtime perch at 60 Wall Street in favor of fresh digs uptown in Columbus Circle.

While a bit elegiac — the presence of the big banks and investment houses literally and figuratively defined the Financial District, the Wall Street corridor in particular — the exits have given and will give other companies an opportunity to lease space Downtown.

“I think it’s great to have the opportunity to have an entire building,” said CBRE’s Adam Foster, one of the team leasing 60 Wall Street. “We will have some interesting and really good opportunities for larger tenants. I’m encouraged by it and the level of renovation that will shortly be underway is going to turn this into an A-plus building.”

The price tag of that renovation? More than $250 million. That money will pay for new triple-height windows, a skylight in the building’s atrium, a restaurant, a cafe and an indoor green wall — one that the building’s landlord, Paramount Group, said will be the largest in North America. The construction is set to begin in the summer of next year, and Foster said he’s already received interest from potential financial services, law, media and tech tenants.

Still, the new occupier of the 1.6 million-square-foot, 47-story office building is a mystery as Deutsche Bank prepares to say its goodbyes in favor of a consolidation at the Time Warner Center, now called the Deutsche Bank Center.

But it might not remain a mystery for long. The Financial District has gained popularity during the pandemic as companies seek out high-quality office buildings with easy access to transportation — two characteristics that abound in Manhattan’s Downtown, Foster said.

Plus, there are plenty of options thanks in large part to the pandemic’s catastrophic effects on the office market. The Financial District had an availability rate of 22.2 percent at the end of the third quarter in September, according to Colliers.

Wall Street and its environs has already begun to stand for something new in the meantime: a talent hub, said Jeremy Moss, an executive vice president at Silverstein Properties, probably best-known for developing much of the new World Trade Center.

In the last 15 years, more than 920 companies have relocated to more than 24.5 million square feet of office space in  Lower Manhattan, with 42 percent from the tech, advertising, media and information (TAMI) sector, and only 14 percent from financial services, insurance and real estate (FIRE) industries, according to the Alliance for Downtown New York.

During the pandemic, too, companies have been inclined to choose the Financial District as they seek out higher-quality office space.

“The pandemic forced companies to explore the importance of office space,” Moss said. “And I think the result is companies are investing more in the quality of the space that they create, so that it can support the kinds of activities that are collaborative and require people to come together.”

But it’s Lower Manhattan’s access to hot neighborhoods like TriBeCa and SoHo, Brooklyn’s Williamsburg and Park Slope and New Jersey’s Hoboken and Jersey City that make it an attractive place to live and work, Moss said. That shift has even changed how New York City feels, he added.

“New York is growing, and, as a result, the notion of where the center is has changed,” said Moss.

Companies have found the Financial District to be more attractive, too, because of its proximity to many popular Brooklyn, New Jersey and Manhattan neighborhoods, where its employees and potential new hires work, said Moss. The area will continue to diversify in terms of tenants, he added, but tech-oriented ones with younger workforces will predominate.

Still, you can’t take all of the finance out of the Financial District. Several companies, including American Express, Brown Brothers Harriman and Goldman Sachs have kept their operations Downtown. The area has a storied history with big banks, but their exodus from the neighborhood began a lot earlier than many people might think. It started in the decades immediately after World War II as new technology made it no longer necessary to stick close to the New York Stock Exchange, according to Franklin Wallach, a senior managing director of research at Colliers.

Citigroup was one of the first to leave. It moved its headquarters from Wall Street to 399 Park Avenue in the early 1960s, when new buildings in Midtown were flourishing. Citigroup exited Wall Street for good in 2019, when its investment division left 900,000 square feet at 111 Wall Street.

Banking’s exodus was one of the reasons the first World Trade Center buildings were constructed in the early 1970s — to help revitalize the area — though it took nearly 30 years to lease up the original Twin Towers. Before 9/11, a handful of early dot-com-era tech companies did get their starts in Lower Manhattan, but quickly dissipated. After 9/11, the area began to shift into a mix of residential and commercial buildings as office tenants skittish about the threat of terrorism left. Today, every building from Trinity Church on Broadway to Water Street on the south side of Wall Street has been converted to residential or hospitality use.

Residential conversions might be one response to the area’s high availability rate — caused by the expiration of several major leases coinciding with the pandemic, Wallach said. But Lower Manhattan is in a good place to recover, he added.

“If it was to ever go through this challenge, any time between 1945 and 2021, I would pick this moment,” Wallach said. “Downtown has evolved so much and gained so much strength as a market. The Downtown of the 1980s, if it was faced with a 20 percent availability would basically only be able to recover if more large financial service tenants went to that market.

In many ways, the Financial District’s shift away from financial tenants is a microcosm of Manhattan. Tech tenants have become the driving force in its office market and its employees are changing the island’s very culture. You used to move to New York to make a pile in finance; now you might do the same in apps. In the third quarter of this year, FIRE tenants led leasing with 30 percent of the activity, followed closely behind by TAMI tenants at 29 percent, according to Colliers.

In 2008, FIRE industries represented 55 percent of tenants in Lower Manhattan, with TAMI tenants only taking up 5percent of the share. In 2010, the share of FIRE tenants had only shrunk 1 percent. But by 2016, FIRE tenants had shrunk to 37 percent with TAMI growing to 12 percent, according to the Downtown Alliance.

Call it new money or fresh blood: Lower Manhattan is changing, and Foster said it’s for the better.

Celia Young can be reached at cyoung@commercialobserver.com.