Wells Fargo CEO Charles Scharf apologized on Wednesday for claiming that the lack of diversity on the bank’s operating committee was due to “a very limited pool of Black talent to recruit from.” The comments sent shockwaves across the nation.

“There are many talented diverse individuals working at Wells Fargo and throughout the financial services industry and I never meant to imply otherwise,” Scharf said in a statement. “It’s clear to me that, across the industry, we have not done enough to improve diversity, especially at senior leadership levels. And there is no question Wells Fargo has to make meaningful progress to increase diverse representation.” 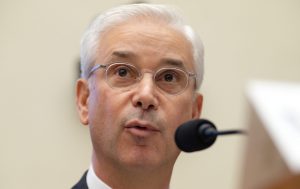 after criticism mounted against Scharf for comments he made in a June memo, wherein he stated that the bank’s operating committee needed more diverse representation but that “the unfortunate reality is that there is a very limited pool of Black talent to recruit from.” Scharf has been at the helm of the bank since 2019.

“It’s so hard to tell because you’re reading a memo. You don’t know what he intended,” said Dr. Scott E. Page, a professor at the University of Michigan’s Stephen M. Ross School of Business. “But let’s put this in the best possible light. He could have said, ‘We’re using very old-school methods to attract talent. And because of that, there’s a shortage of African American and women talent’ or something like that. That would not be a racist or sexist statement. It would be a criticism of the way the organization is going out and finding talent.”

Dr. Montressa L. Washington, an assistant professor of management and director of the Shenandoah University Institute for Entrepreneurship, said she was curious to see what follows Scharf’s apology.

“In 12 months, will Wells Fargo increase the number of Black employees in senior level executive positions, in positions that you require college degrees and positions that have upward mobility, in positions where people are part of the decision-making process?” Washington asked. “In 12 months, will his organization have a recruiting strategy inclusive of Black talent? Will they have established and/or increased or reinforced existing relationships with Black colleges, with other universities that can supply them the talent that they are looking for?

“So I guess I say all that to say, that an apology is a great first step. What are the concrete measurable actions that are going to follow as a result of that?”

“If you start fresh and really think about doing it in an inclusive way, you’ll find that there’s a lot of talent out there,” Page said.