OECD raises prospects for global economy, scales them down for India  Business Standard

The Organization for Economic Co-operation and Development (OECD) on Wednesday said it expects India’s economy to shrink 10.2 per cent in the current financial year (FY21) against its earlier estimate of 3.7-7.3 per cent, owing to extended lockdowns to contain the spread of the Covid-19 pandemic.

However, the Paris-based institution expects the world economy to fare better, with a 4.5 per cent fall in 2020, against its earlier prediction of 6 per cent.

In its latest economic outlook, the OECD attributed its decision on India to “the prolonged spread of the virus, high levels of poverty and informality, and stricter confinement measures for an extended period”.

It said high public debt and contingent liabilities, or a low tax base, constrain the use of fiscal policy to support growth and incomes of vulnerable groups in India.

The government had announced a Rs 20-trillion stimulus package in May to provide relief to various sectors under its Atmanirbhar Bharat (Self-reliant India) package. However, experts estimated its fiscal cost at Rs 1.5-2 trillion as most of the schemes had already been announced. Much of the programme was targeted at vulnerable sections of society such as the rural poor, women holders of the PM Jan Dhan Yojana as well as micro, small and medium enterprises, and the rural sector. Industry expects the government to come out with another package to stimulate demand after first-quarter data showed a severe fall in GDP.

The Centre’s fiscal deficit has already crossed the budgeted level by July. After the Rs 1.67-trillion supplementary demand for grants tabled by Finance Minister Nirmala Sitharaman in Parliament, experts believe the government’s fiscal deficit will reach 7.4-8.5 per cent of gross domestic product (GDP) in FY21, against the Budget Estimate of 3.5 per cent. 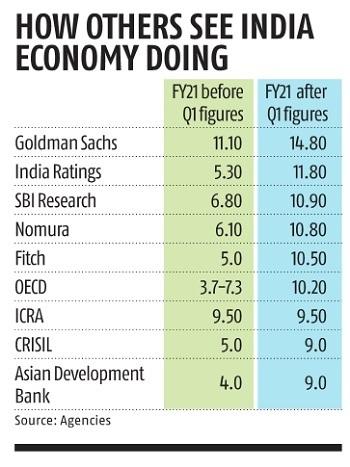 This shifts the burden of economic stabilisation to monetary policy, but the OECD said rising inflationary pressures and concerns about financial stability in some of the emerging market economies, particularly India, limit central banks’ room to cushion economic activity from the Covid-19 shock.

The Reserve Bank of India has cut its policy rate repo by 135 points since the onset of Covid-19. However, for the next year the OECD projects India’s economy to grow 10.7 per cent, 2.8 percentage-point higher than the June forecast. In June, the OECD had projected India’s economy to contract 7.3 per cent in FY21 if there is a second wave of Covid-19 later this year.

If there is no second wave, the grouping of advanced countries — in its OECD Economic Outlook — expected the economy to contract 3.7 per cent during the year. The OECD is not alone in raising its projection for contraction of India’s economy. For instance, Fitch now expected the country’s GDP to contract 10.5 per cent in FY21 versus its earlier estimate of 5 per cent. India Ratings, the Indian subsidiary of Fitch, predicted a sharper fall of 11.8 per cent against 5.3 per cent estimated earlier. Goldman Sachs forecast a 14.8 per cent contraction, against the 11.8 per cent.

India’s GDP fell by a record 23.9 per cent in the first quarter, beating the average analyst expectation of 18-20 per cent fall.

Besides India, the OECD expects five economies — South Africa, Argentina, the UK, Mexico and Italy — to witness a double-digit fall. Of these, three economies are projected to fall at rates higher than India — South Africa at 11.5 per cent, Argentina at 11.2 per cent and Italy at 10.5 per cent. The UK was projected to decline 10.1 per cent and Mexico at the same rate as India at 10.2 per cent.

The OECD said sizeable upward revisions for China and the United States, and smaller ones in the European economies, account for most of the adjustment to global growth. The Chinese economy is now projected to grow 1.8 per cent in 2020, against the 2.6 per cent contraction forecast by OECD in its June report.

China is the only G20 country whose economy is projected to rise in 2020, helped by the earlier timing of the virus outbreak, rapid control of the virus and the policy support provided to enable a quick rebound in activity.

While most economies contracted in the second quarter of 2020, the Chinese economy grew by 3.2 per cent.

The OECD expects the US economy to fall 3.8 per cent in 2020, against 7.3 per cent it predicted earlier.