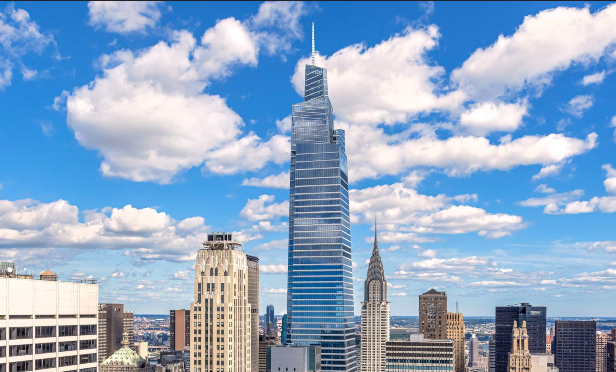 The SL Green Realty Group and its partners Hines and National Pension Service of Korea has delivered its newest premier property, One Vanderbilt Avenue in New York City adjacent to Grand Central Terminal. The $220 million project is a headquarters-quality office building. It stands 1,401 feet tall and totals 1.7 million square feet. While this is an exciting trophy property, it is delivering to the market in a turbulent time for the New York City, with both leasing and occupancy rates down due to the pandemic.

The good news, the property is already 70% leased to a mix of finance, banking, law and real estate firms. The list of existing tenants is long, but includes TD Securities and TD Bank, America’s Most Convenient Bank, The Carlyle Group, KPS Capital Partners and Oak Hill Advisors, to name a few. The developer’s goal was to create a client-facing campus for multiple and diverse entities to thrive in the city.

The property’s design underscores SL Green’s vision for the property. Of course, it includes state-of-the-art technology, amenities and a focus on health and wellness—something that is particularly important now. The developer invested $17 million in health, wellness and sustainability, including maintaining one of the lowest carbon footprints of similarly sized properties in New York City. The property regulates insulation for heating and cooling through its high-performance glazing, has a 1.2-MW cogeneration and a 90,000-gallon rainwater collection systems. For that reason, it is on track to obtain LEED certification and WELL certification.

The property has a single stand-alone application for tenant access and visitor management, supplying both access and a touch-free experience. In addition, SL Green included a thermal imaging technology that can read 100 people per minute, ultimately preventing crowds and long lines from forming.

SL acquired four properties to create the site that ultimately would become One Vanderbilt Avenue. Those four sites include 317 Madison Avenue, 331 Madison Avenue, 48 East 43rd and 51 East 42nd Street, which were all acquired from 2001 to 2011. Plans were presented for the project in 2014 and approved in 2015. In 2017, SL Green formed a partnership with Hines and National Pension Service of Korea, ultimately launching the construction of the project.

While this project is premiering with strong occupancy, the New York City office market is experiencing a severe dislocation that will no doubt have an impact on the property. Earlier this month, 160 CEOs in the market wrote an open letter to New York City mayor Bill de Blasio to address issues in the market, including escalating crime, growing homelessness, sanitation issues and a slow reopening schedule. The problems, according to the CEOs, contribute to deteriorating conditions in the city. The list of CEOs included Lyft, Macy’s and Goldman Sachs.