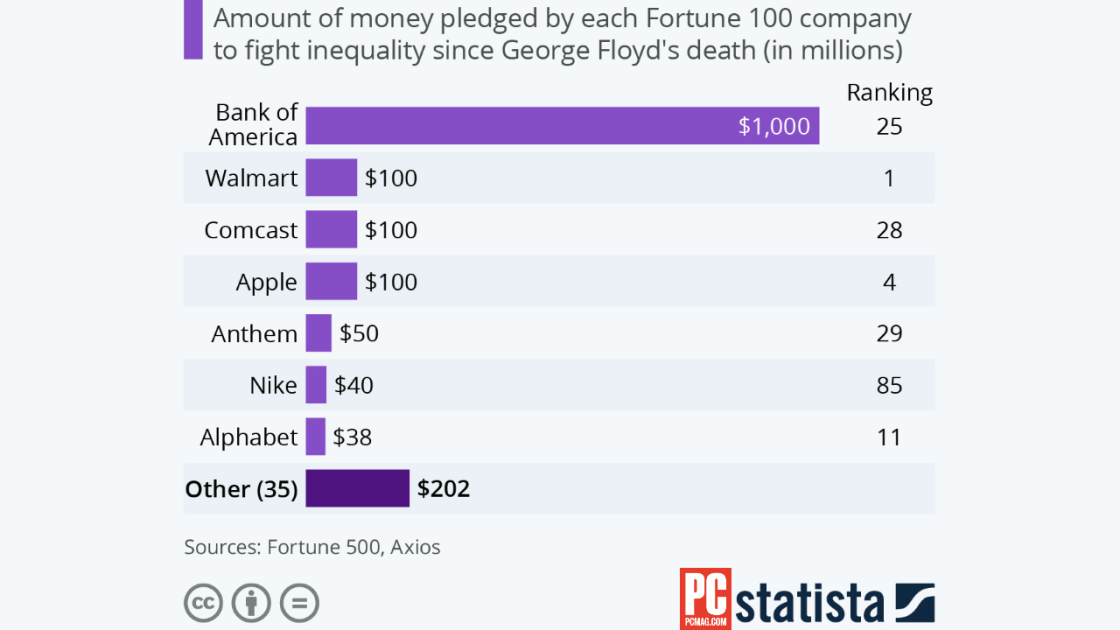 It’s hard these days to be a company worth billions of dollars and still really connect with people. That’s why (he said cynically) many big-name firms, a lot of them in tech, that make up the Fortune 500 are doing what they can to get in good with the public in the wake of the Black Lives Matter protests happening around the world.

Specifically, companies are making big pledges of monetary support to help fight racial and other inequalities. As of June 14, 2020, according to data gathered by Axios and quantified in the chart above by our partners at Statista, 44 companies in the Fortune 100 list have pledged a total of $1.63 billion. The biggest donation is coming from a bank: Bank of America is donating a full $1 billion over 4 years (with a focus on communities of color impacted by the pandemic). Bank of America ranks at number 25 on the Fortune list.

As Statista notes: “The response of many top companies to the Black Lives Matter movement and the killing of George Floyd is very different from the recent past, where companies thought discussing the issues would only hurt their brand. Now, it seems many companies think the opposite—if they don’t outwardly pronounce their support, their brand could suffer.”

Silicon Valley has its own diversity problem; maybe these companies could also address that.

Could any company ever give enough? Probably not. Even wealthy individuals worth a lot—celebrities in particular—have been singled out for not giving sufficient donations. A 3-day poll by Morning Consult of 2,200 US adults asked how much celebrities should be giving to racial justice or LGBTQ groups, and depending on political leanings or social status, the numbers are all over the place. But they start at $100K, expected of celebs by black adults, and go up to $500K, expected of celebs by Democrats and LGBTQ adults. The median was $300K.

A few tech-company execs with their own killer net worths are stepping up with individual donations. Box CEO Aaron Levie offered $500,000.  Netflix CEO Reed Hastings and his wife Patty Quillin are giving away a full $120 million to spread equally among three black colleges to help students avoid debt.

Then there’s Mark Zuckerberg, who has an entire company outside of Facebook (the Chan Zuckerberg Initiative) that does just philanthropy, where 74 employees have called for changes to make it more inclusive—and they did so publicly.

So the work continues. How, in the long run, anyone could ever account for the billions in donations doing the work it needs to do, let alone actually getting to an organization in need, remains to be seen.