The last few weeks have been very disturbing to me and for many of you as well. As our nation reels from the death of George Floyd and countless others, youthful protestors of infinite diversity and humanity have taken to the streets, in all corners of America as well as countries abroad, crying out for an end to police brutality, injustice, and systemic racism. As their actions reverberate across society, it is critical that America’s most esteemed and influential leaders from all sectors, including corporate, respond to this new generation’s call to action.

Coming off a year of record profits, many of America’s Fortune 1000 companies are in position to reinvest in existing programs and new initiatives that address inequality and racism. Well-polished statements of concern no longer are enough. I write to you today, not only to appeal to your moral conscience but also to your pocketbooks. I call on America’s corporate giants to march forward in solidarity with those pushing for a more just world by establishing a pool of $1 trillion in funding for racial equality causes. Freedom’s bill is due. 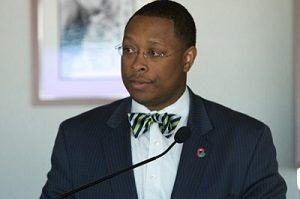 As former President Jimmy Carter said in a recent heartfelt statement: “People of power, privilege and moral conscience must stand up and say no more to a racially discriminatory police and justice system.”

There is no group more powerful and privileged than America’s largest corporations. They have seen billions upon billions in federal tax relief just in the past two years as corporate profits have risen to record levels. Yet, as they swim in pools of profitability, an unjust legal, economic, and social system continues to sweep away people living in America’s blackest and brownest zip codes.

Already, in this moment, some have begun to answer the call, such as Bank of America, who has made the boldest pledge of $1 billion over four years to community programs to help address economic, and racial inequality. Meanwhile, others are also recognizing their corporate responsibility to make efforts to help causes advocating for racial justice. Verizon is offering $10 million to the National Urban League and the NAACP; Facebook $10 million to groups fighting for racial inequality; Intel $1 million to groups focused on community organizing; and Peloton $500,000 to the NAACP Legal Defense Fund.

But these patchwork efforts pale in comparison to the collective impact of a newly-formed foundation infused with a trillion dollars of corporate cash. Consider for a moment that federal funding for the Louis Stokes Alliance for Minority Participation (LSAMP), a nationwide National Science Foundation program to increase underrepresented minority student recruitment, retention, and attainment of STEM degrees—amounted to only $41 million in 2018.

In my own backyard, I have seen the tremendous impact that a few million dollars in corporate giving can have. In January 2019, JPMorgan Chase & Co. (JPMC) gave $2.5 million—the largest corporate gift in the history of The Ohio State University Office of Diversity and Inclusion—to support two scholarship programs that boost academic success for many students of color. In my conversations with JPMC CEO Jamie Dimon, I have come to understand that he rightfully envisions these dollars as an investment in a brighter, more diverse future. Like any good banker, he sees an opening to get a good return on his investment by helping to build a more diverse workforce and a stronger community in central Ohio for all.

The ancient Greeks had a word for love of mankind—that word was philanthropy. With purposeful empathy wrapped in powerful action, America’s business giants can help this country begin to find its way forward, living up to the ideals of opportunity and justice for all. In the words of a former leader of the Office of Diversity and Inclusion, Dr. Frank W. Hale Jr., “Commitment without cash is counterfeit.”

In closing, I am confident that you can play a major role in eradicating racism and its effects in all sectors of American life, especially if we invest together in addressing inequality and racism. I stand ready to be a resource to you, and I look forward to hearing about future collective investments in inequality and racism.

Dr. James L. Moore III is the vice provost for Diversity and Inclusion and chief diversity officer at The Ohio State University, while serving as the first executive director of the Todd Anthony Bell National Resource Center on the African American Male. He is also the inaugural EHE Distinguished Professor of Urban Education in the College of Education and Human Ecology. From 2015 to 2017, Dr. Moore served as a program director for Broadening Participation in Engineering in the Engineering Directorate at the National Science Foundation in Arlington, Virginia.