25 years back, Mr. Bill Gates dismissed banks as “Dinosaurs”. Mr. Gates could see the future as it holds true to the current scenario. Its 2018. But has banks became oblivion? I believe they are not. They are still present and will be in the market for longer than expected. As long as banks dominate lending, investing and deposits, they will be equally important and in demand for most of the industries and sectors.

Surprisingly, SME banking has not shown any signs of lifelessness and is unaffected by the rise of internet. Retail banks however, have digitized to a large extent. Services such as customer transactions, underwriting and servicing of loans have been digitized. The banks still have a long way to go before they can call themselves fully digitized. But they are still in race and cannot be ignored. According to a research from Bain & Company, banks can handle only 7% of products digitally from end to end. This data needs to be changed if the banks want to survive in the digital world.

Fintech has changed the traditional concept and has led to digitization of every possible financial service. New realities are being captured under the governance of Fintech. The market figures reveals the truth about the market:  Technavio’s analysts forecast the global fintech investment market to grow at a CAGR of 54.83% during the period 2016-2020. Global investment in financial technology (fintech) ventures tripled to $12.21 billion in 2014. This all have made fintech a hot selling cake in the market.

Additionally, post PSD in 2018, banks will have to share their data with other rival financial providers and aggregator sites, and allow third-party developers into the back-end of their processes, taking payments directly without the intercession of the bank. This will provide access to unlimited customer data to the aggregators and financial services providers. Tech giants such as Facebook, Amazon, and Google will be having a greater part to play in the transactions without much consent from the banks.

How are banks approaching towards ‘Fintech’. The following figure shows a small representation of banks and fintech in services space.  Data points discussed in the figure are based on a study which was done in 2016. The study concentrates on banks being partners and not competitors. From the figure, one can relate that banks have taken proactive efforts to counter challenges created by fintech. They have created internal digital teams and exploring the possibilities in startups, partnerships and funding.  Apart from such efforts, banks also need to focus on their IT operating model. Banks should adopt fintech strategy to create the real advantage. They should be bound to follow build fast or fail fast approach which has been one of the important factor for fintech success recently. According to one of the bank’s CIO, the banks should adopt ‘industrialization of innovation’, indicating the scale of the change that is needed.

Such partnering and funding by banks have created a trend in the market. Trend of banks partnering up with fintech companies, acquiring them, or funding them can be seen as well. Some banks are also taking efforts to launch their fintech subsidiaries.  Some of the examples of such banks are listed below:

Along with the above discussed efforts, creating a culture of industrialized innovation is always a positive start. To create a culture or adopt ‘industrialization of innovation’, banks need to analyze their strength and put in some serious in-depth analysis to come up with innovative concepts. This innovation can be brought into the organization by bringing the required talent, skills and experience into the system. For the reason, banks are increasingly looking to recruit new talent in order to bring fresh thinking and perspectives to the table.

As suggested by many financial experts, the banks should overcome the vacuum of inexperience in the fintech domain.  Banks should not stick or restrict their scope to one industry but rather should look beyond their own industry for ideas. Banks should think of hiring technological/digital experts who can share their experiences and insights to customer-facing application enhancements. Recent trends of experts from fintech startup and gaming industry as compared to large financial institutions.

When it comes to fintech versus Banks, it’s not only the comparison of banks and fintech but it’s also a comparison of innovation and traditional concept, Asset Managers and Robo-advisors, Lenders versus Peer to peer marketplaces, Traditional point of sales versus point of sale as apps. However, it won’t be wrong to say that banks and fintech have struggled to find a common work space.

Some analyst report suggests that fintech were introduced with a bang and expected to grab major market share and replace banking culture. On the contrary, they fell short on banks’ customer reach and capabilities. Customers judges fintech with suspicion or mistrust. The following figure shows the trust and confidence factor between banks and fintech by region (%).

From the comparison as shown in the picture, major regions across the globe still prefer and trust banks with confidence. This comparison is being discussed since long now. In 2016, Capgemini Consulting in collaboration with EFMA conducted a global study to gauge customers’ attitudes towards financial service companies – banks and FinTech companies alike. In other words, the report says – collaboration is the best way out.

Capgemini in one of its report (Financial Services Analysis), concluded that recognition of each other’s strength has fostered a fundamental shift between banks and fintech. Rather than squaring up, banks and fintech are partnering up. A very promising trend which was seen in the report was that majority of banks are willing to work with fintech, 91.3% to be specific.  Fintech on the other hand are also following a similar pattern. 75.3% says, they want to work with the banks. The following figure is sources from the Capgemini’s report.

Banks working with fintech opens the innovation prospects for the banks. The partnership will create value for banks in terms of strategy, future prospects and operational excellence. This value creation proves to be win-win situation for both banks and fintech. Collaborations in Europe has seen promising iterations. The following chart shows the collaboration with fintech by Europe’s top 10 banks 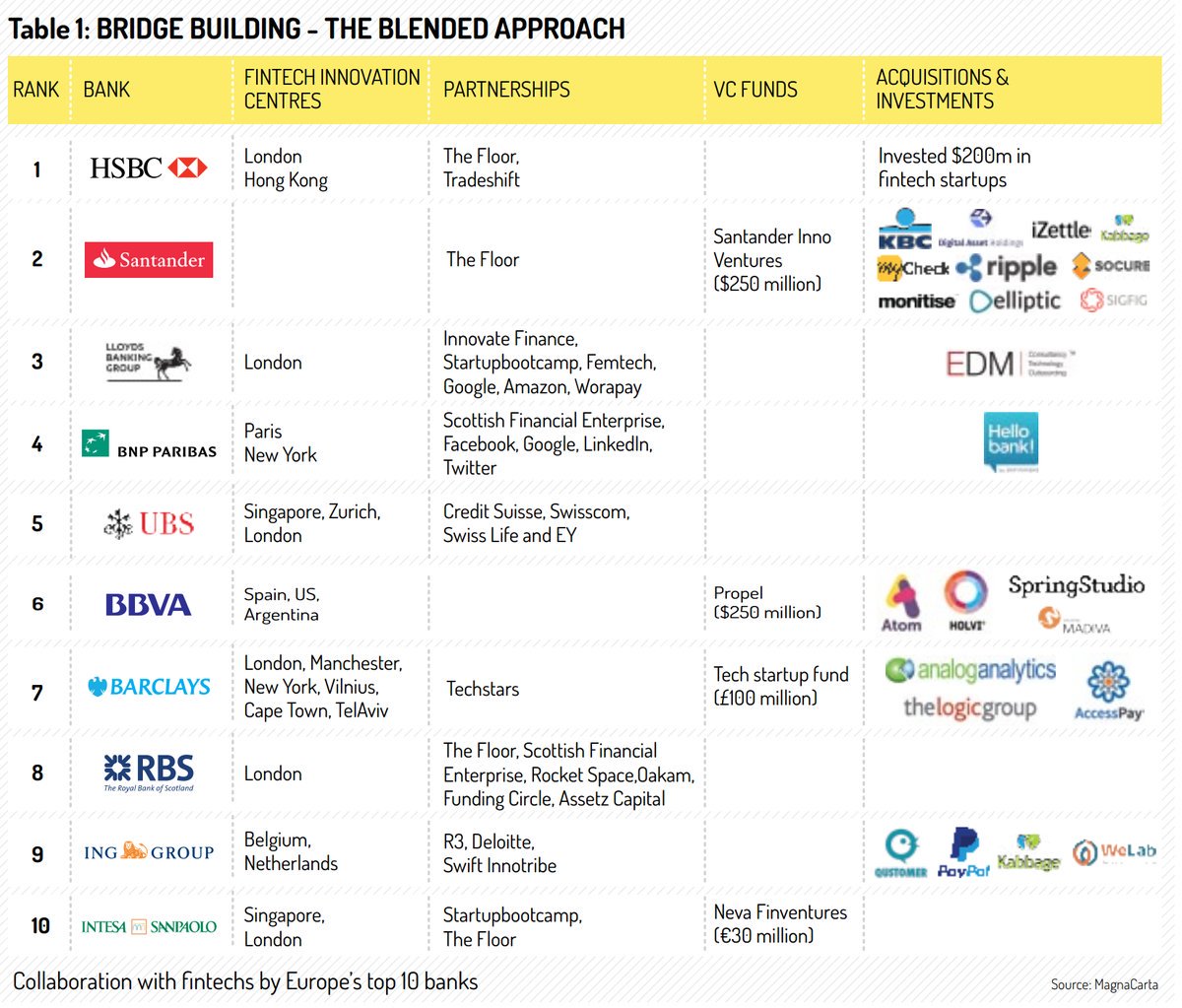 Collaboration will bring various benefits to banks and fintech. These benefits are based on the Fintech Bridge Survey 2017 asked fintech innovators and established financial institutions to look ahead, both in terms of the benefits which the current phase of collaboration and venture capital investment will bring, and an indication of what the financial services landscape will look like in five years. Some of them are listed here:

In this analysis, consumers are the one who are real and clear winners. One can easily make an outcome out of this is collaboration between banks and fintech will make process faster, better, simple, efficient and above all Customer centric. This will open new possibilities for consumers in Financial Services and Personal Finance. It is more like match made in heaven. The only thing is banks and fintech to realize this potential and work for its up-lift.