The rally in the municipal market continued in earnest Tuesday, with yields falling in anticipation of more meager supply hitting the screens later this week.

Benchmark AAA municipal yields have hit record lows at the front end of the curve. Yields on the one-year are hovering anywhere from 0.06% to 0.13%, depending on the scale. 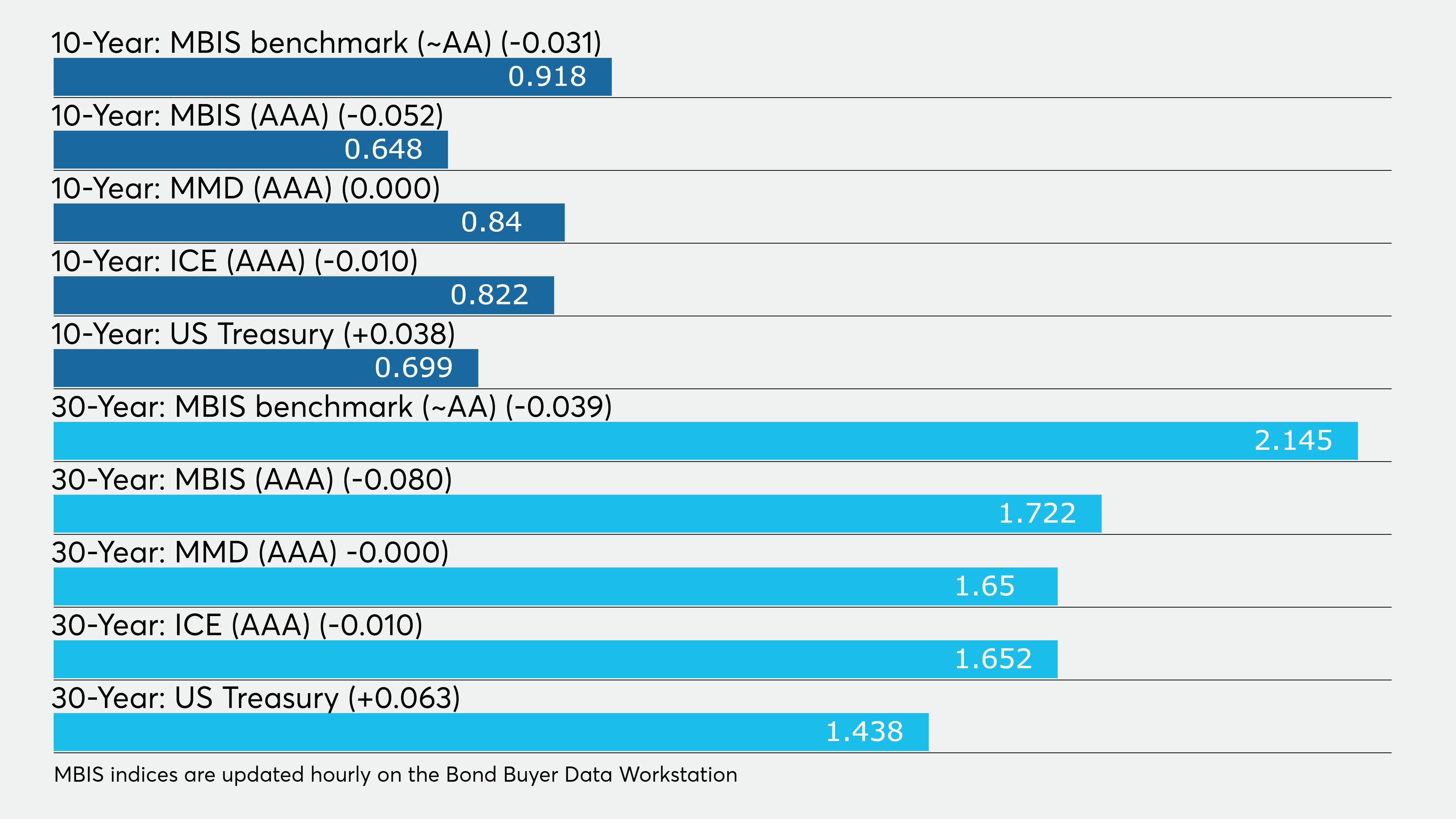 “The market’s moves this month would have seemed implausible in March given the severity of the economic pullback across every state,” said FHN Financial Senior Vice President Kim Olsan. “And yet, 15 trading sessions into May have brought a grinding rally with successive price gains driven by a range of committed buyers. Just where it stops is anyone’s guess (in theory a 1-year AAA spot around 0.10% isn’t far away from 0%) but ample demand along the curve is overriding any local or state credit concern.”

That credit concern is being lost somewhat in pricing munis and traders said they are looking for alternative benchmarks, even turning to corporates and U.S. Treasuries to price the market.

“The influence and sustainability of benchmark levels have been reduced; trading has become more scattered as investors look for better and heterogenous comparables,” Matt Fabian, partner at Municipal Market Analytics, said in the firm’s Outlook report.

Fabian noted the June reinvestment is now upon the market, even as more issuers make public their plans to reduce near-term borrowing.

“But the recent rally in AAAs is also a function of overly focused demand, and amplified volatility; meaning, with pandemic-linked uncertainty, fewer borrowers now qualify as ‘high grade,’ and those are being more aggressively priced and purchased.”

“Rally mode continues as tax-free bonds broke away from the direction of U.S. Treasuries,” said Eric Kazatsky, senior municipal strategist at Bloomberg Intelligence. “Drilling down, longer-duration muni bonds have fared better month-to-date, with returns that outpace the short end of the curve by almost 270 bps. However, this may be giving a slightly rosier picture than what reality has been over the past month and week.”

On a year-to-date basis, the three-year portion of the curve has been the best performer, returning 1.49%, vs. minus 0.40% for the muni long-bond index.

In terms of credit, it is somewhat of a mixed bag for issuers. Some revenue bonds are faring better than state issues (see Illinois vs. Puerto Rico) and some new issue deals are being purchased by corporate accounts. Municipal buyers are shifting and the market is changing. On Friday, J.P. Morgan bought a $1 billion private placement from the Dormitory Authority of New York State of short-term notes.

The larger implication for the market is that buyers’ credit analysis is “looking beyond the near-term and factoring in (for the most part) local and state revenue recoveries past the next few quarters,” Olsan said.

And Olsan and others pointed out that one date that could hold significance is July 15, when many states will expect to see an influx of tax payments being made.

It’s clear that during that time the figures will be a telltale sign of credit as more state and local governments reopen.

Primary market
Activity was sparse on Tuesday after the long holiday weekend.

Kicking off the week on Wednesday, will be Colorado’s (Aa2/AA-/NR/NR) $500 million certificates of participation deal. BofA Securities is expected to price the COPs. 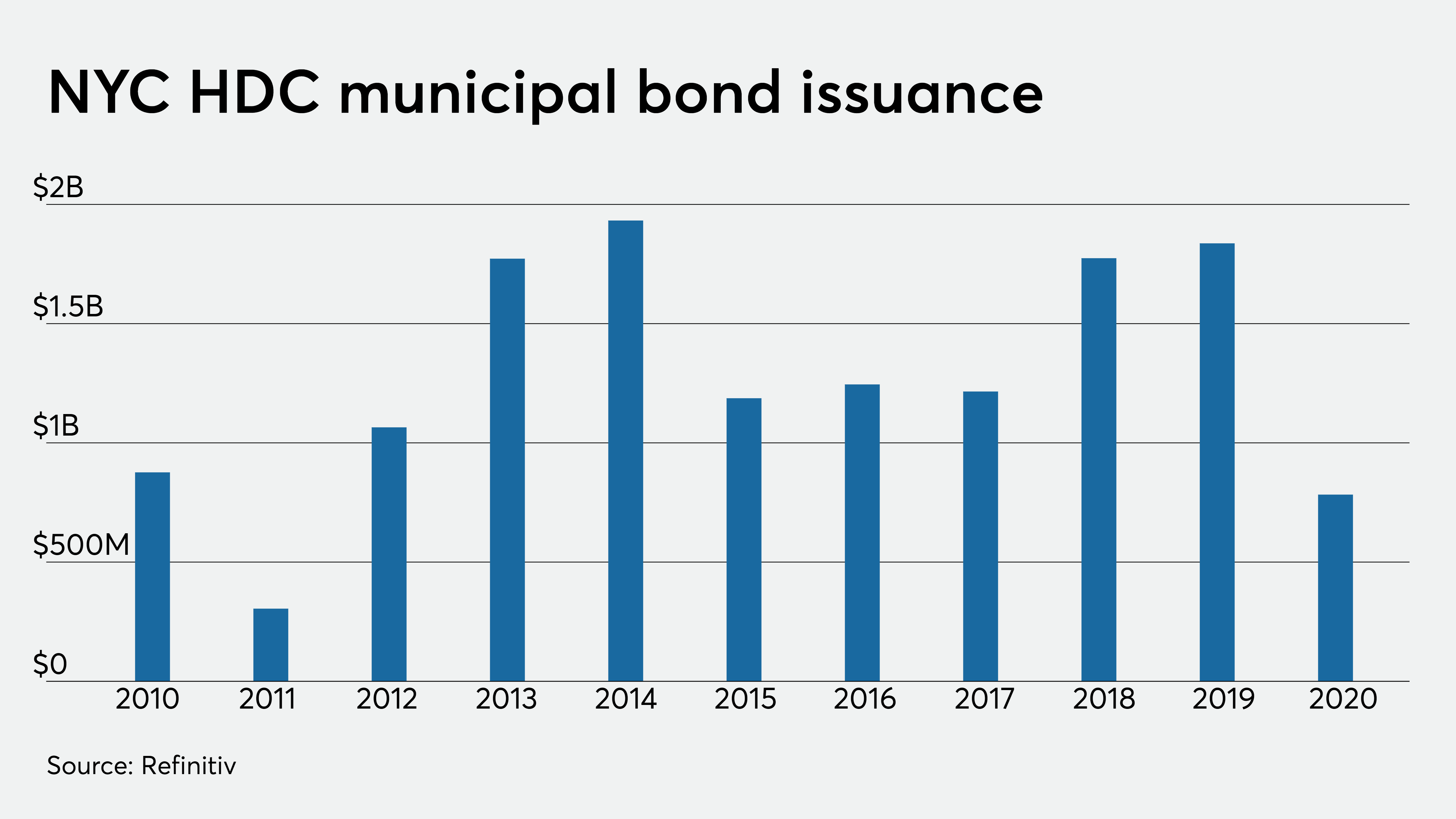 JPMorgan Securities is set to price the Series 2020A1B and A3 multi-family housing revenue bonds. Proceeds will be used to finance housing construction and refunds some outstanding debt.

NW Financial Group in the financial advisor; Parker McCay is the bond counsel.

Hilltop Securities is the financial advisor; Locke Lord is the bond counsel.

Secondary market
Municipals ended stronger on the short end as yields continued their descent and the long end stabilized.

“Munis are rallying to start off the week,” ICE Data Services said in a market comment. “Yields on the ICE muni curve are one to three basis points lower … one-year yields are sitting at an all-time low of 14 basis points (0.14%). The one- to 30-year yield curve is 151 basis points.”

ICE said the muni to Treasury ratios continued to fall: the 10-year muni-to-Treasury ratio was at 125% while the 30-year ratio stood at 113%.

Munis were also stronger on the MBIS benchmark scale, with yields falling in the 10- and 30-year maturities.

“BBBs outperformed AAAs by 44 basis points week over week as investor risk appetite has increased, though total returns for A and below credits remain negative year to date,” Wells Fargo said in a market comment Tuesday.