The Crumbling Cult of Jamie Dimon  The New Republic 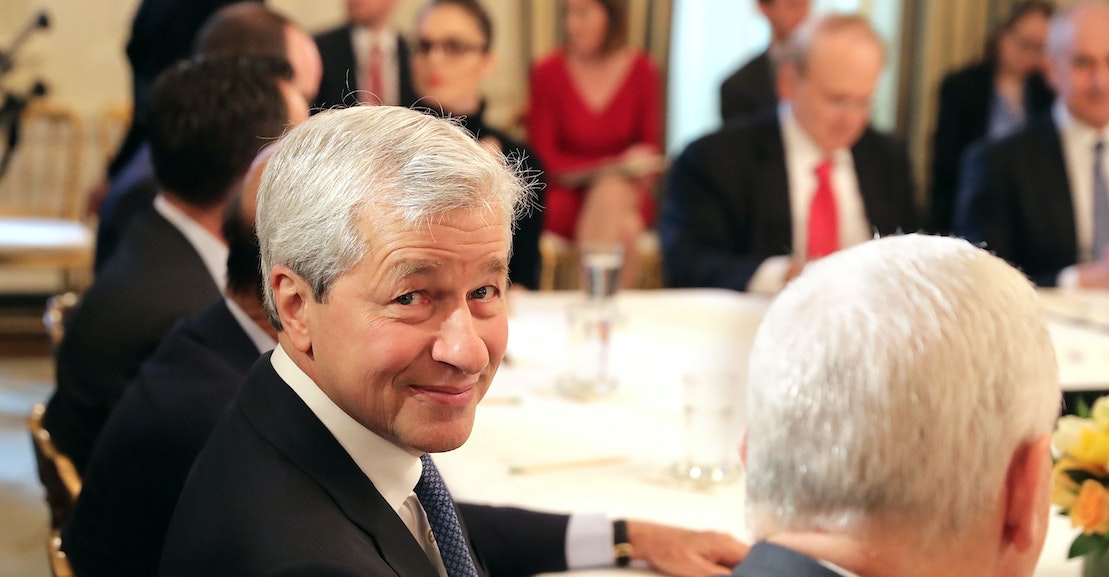 Under the most extraordinary circumstances imaginable, Jamie Dimon, the chairman, CEO, and president of JPMorgan Chase, has noticed an incredibly obvious thing: Everything might not be going great; perhaps the economy is not working as intended.

In a shareholder memo released last week, Dimon wrote, “The last few months have laid bare the reality that, even before the pandemic hit, far too many people were living on the edge.” Clarifying that he didn’t mean “living on the edge” in some sort of cool or badass way, Dimon called on “business and government” to “confront the structural obstacles that have inhibited inclusive economic growth for years.”

The memo—unsurprisingly—did not conclude with an announcement that JPMorgan Chase would voluntarily close up shop and hand off whatever actually productive and useful business it engages in to community banks or credit unions or the United States Postal Service. It contained an account of the many people the bank had helped by delaying mortgage payments or extending credit but was silent on whether and how the bank’s normal way of doing business might have to change to confront those obstacles to more equitable growth. Dimon is a serial Noticer That Things Could Be Better, but he has always remained quite vague on why those things could be better or what might be required to improve them.

The mere act of noticing tends to be enough to win him not just plaudits in the press but the respect and solicitousness of politicians from both political parties. (He has been named in the press as a plausible treasury secretary for both Donald Trump and Joe Biden.) In 2018, Dimon earned positive coverage for using his annual report to shareholders to ask such unusual questions as “Why have productivity and economic growth been so anemic?” and “Why have income inequality and so many other things gotten worse?” These are important questions, but they are also obvious ones. If it was newsworthy that a titan of American finance was asking them, it’s mainly because our titans of finance generally make a point of not noticing anything inconvenient about their line of work.

Even Dimon has an impressive record of obliviousness: unaware that Bernie Madoff was running the largest investment fraud in U.S. history out of his Chase business account; failing to notice traders colluding to manipulate foreign benchmark interest rates; ignorant of the fact that an arm of his bank intended to park excess deposits in safe assets was making massive and bizarre trades in credit derivatives while obscuring the extent of its losses. Dimon somehow managed to be both aware of the fact that mortgage fraud was rampant as early as 2006 and unaware that his bank continued to securitize high-risk mortgages and fraudulently sell them as low-risk investments well after he came to that realization.

It is with that history of seemingly selective noticing in mind that I return to that 2018 letter to shareholders. Before Dimon got to his big solutions, he briefly deigned to “discuss one major debate currently in the echo chamber.”

Capitalism may have its “flaws,” he granted, but the alternative is unthinkable. “When governments control companies,” he explained, “economic assets (companies, lenders, and so on) over time are used to further political interests—leading to inefficient companies and markets, enormous favoritism and corruption.” Can you imagine? Inefficiency, favoritism, and corruption? “Socialism inevitably produces stagnation, corruption and often worse,” Dimon added. We clearly wouldn’t want to organize our entire society around a system that might produce stagnation, corruption, and whatever might be worse than both.

Shortly after releasing this letter, Dimon, through Business Roundtable, a corporate interest group he leads, announced the end of shareholder primacy in a highly publicized unilateral redefining of the “purpose of a corporation.” He and the other CEO members of the Roundtable would now incorporate the interests of “stakeholders,” a major break with the business world’s longtime consensus about the role a corporation should play in American life. To give an oversimplified explanation of an oversimplified diagnosis: The corporation in the era of the postwar liberal consensus was understood to be run by independent managers who believed their responsibility was not solely to earn profits but to serve their stakeholders, meaning employees, communities, suppliers, and even their nation. In the 1970s, neoliberal and conservative thinkers rejected that notion entirely and argued that the sole responsibility of a corporate executive is to deliver returns to shareholders, the people (and institutions and firms) that literally own shares in the corporation. Any other mission, under this framework, is irresponsible corporate management.

Shareholder primacy has dominated business thinking more or less ever since, and today it is often blamed for all sorts of modern ills, such as corporate short-termism, the decline of organized labor, disinvestment, and outsourcing. Perhaps those problems were an inevitable result of capital seeking ever greater returns and not specifically caused by a well-known Milton Friedman memo, but there is no denying that the form of capitalism described by that memo has been less than responsive to the needs of most non-capital-owning Americans. As Doug Henwood explained in 2018: “Since 2012, nonfinancial corporations have made net investments—net meaning after allowing for the depreciation of existing assets—of $2 trillion. Over the same period, they distributed $6 trillion to shareholders in the form of dividends, stock buybacks (intended to boost share prices), and takeovers. Instead of providing investment funds to businesses (which is what most people think it does, but it really doesn’t, and never has very much), the stock market has served as an instrument of value extraction for the last 35 years.”

This week, almost a year after Dimon and company placed the desires of stakeholders above their other duties of responsible corporate governance, and in the midst of a global pandemic that exposed, for Dimon, the shortcomings of our current economic arrangement, we got to see an example of JPMorgan’s new commitment to stakeholders over shareholders at work. At this year’s virtual shareholders’ meeting, activist shareholder groups campaigned for the passage of a resolution calling on the bank to “describe whether it will align its lending with the Paris goal of maintaining global warming well below 2 degrees Celsius and how it plans to do so.” They were not, to be clear, actually demanding the bank divest from fossil fuels—merely demanding it produce a report explaining whether it would ever partially or mostly do so. The resolution failed, barely, with the bank—the world’s largest fossil fuel financier—urging shareholders to vote against it.

According to the new rules of stakeholder capitalism, of course, that vote should hardly matter. A slim majority of JPMorgan Chase shareholders wish for that destructive financing of extraction to continue, for the sake of their bottom lines. Stakeholder-responsible corporate governance would surely deny them what they want. Unless the bank’s most important stakeholders do not include “everyone on the planet” but, instead, tar sands pipeline operators.

Some economists, such as Dean Baker, argue that corporations haven’t been maximizing “shareholder value” at all, with shareholders (being a large and diffuse group, as the fossil fuel vote shows) having little power over the true beneficiaries of the modern corporate form: executives, whose lavish compensation is generally decided by boards of similarly well-compensated directors whom shareholders (a large and diffuse group) have little real power to unseat. (It seems relevant to note that another priority of JPMorgan’s activist shareholders, the removal of the board’s “lead independent director,” a former Exxon executive and reliable Dimon ally, also failed at this week’s meeting.)

Dimon, one of the few large-bank CEOs who is an actual billionaire, is typically among the highest-paid executives in the country, with his compensation usually tied to performance metrics having little to do with his company’s commitment to nebulously defined stakeholders. Profits up? Dimon’s pay goes up. Share prices up? Pay goes up. JPMorgan loses billions of dollars in a hugely embarrassing, internationally publicized trading fiasco? Pay goes down (to a mere $10 billion bonus). Bank settles with the government, agreeing to a historic penalty to avoid a criminal complaint being filed over mortgage and securities fraud? Pay goes … up. (A trading loss is a business mistake. Agreeing to a major settlement in exchange for keeping the extent of your crimes secret is good management.)

Dimon and his friends didn’t get around to redefining the purpose of a corporation until last year, so perhaps this holiday season his bonus will be tied to how well he treated his suppliers, employees, customers, and the planet at large, as opposed to the usual economic benchmarks. He says he hopes businesses will (in collaboration with the government) “confront the structural obstacles that have inhibited inclusive economic growth for years.” Perhaps we can give him time to do so and conclude that one problem is that most of what JPMorgan does is simply rentier capitalism; and that, in an already rich and developed country like the United States, financial-sector growth is inherently destabilizing and probably harmful to overall economic growth. And then, perhaps, the board will reward him for determining that his sincere commitments to liberal capitalism, and to responsible corporate governance, require that he voluntarily reduce the size and scope of his bank’s activities, limiting itself to only the sort of functions identified by former British banking regulator Adair Turner as “socially useful.”

That would be a reasonable first step, if a powerful bank executive wished to prove to skeptics that responsible capitalism, practiced by self-regulating responsible capitalists, can work for everyone. If, on the other hand, Dimon sticks with pushing useless half-measures to systemic and chronic problems he periodically notices, all while quietly continuing to finance the baking of the planet? I say we get to socialize them.