The municipal market saw yields fall by five to six basis points across the curve and strong secondary high-grade trades showed it. Municipals are poised to gain well over 2.5% for the month and return to positive territory for the year after being pummeled at the start of the coronavirus-led sell-off in March.

According to the Bloomberg Barclays Index, municipals will see 2.7% returns since the beginning of the month, the largest one-month return since 2009. 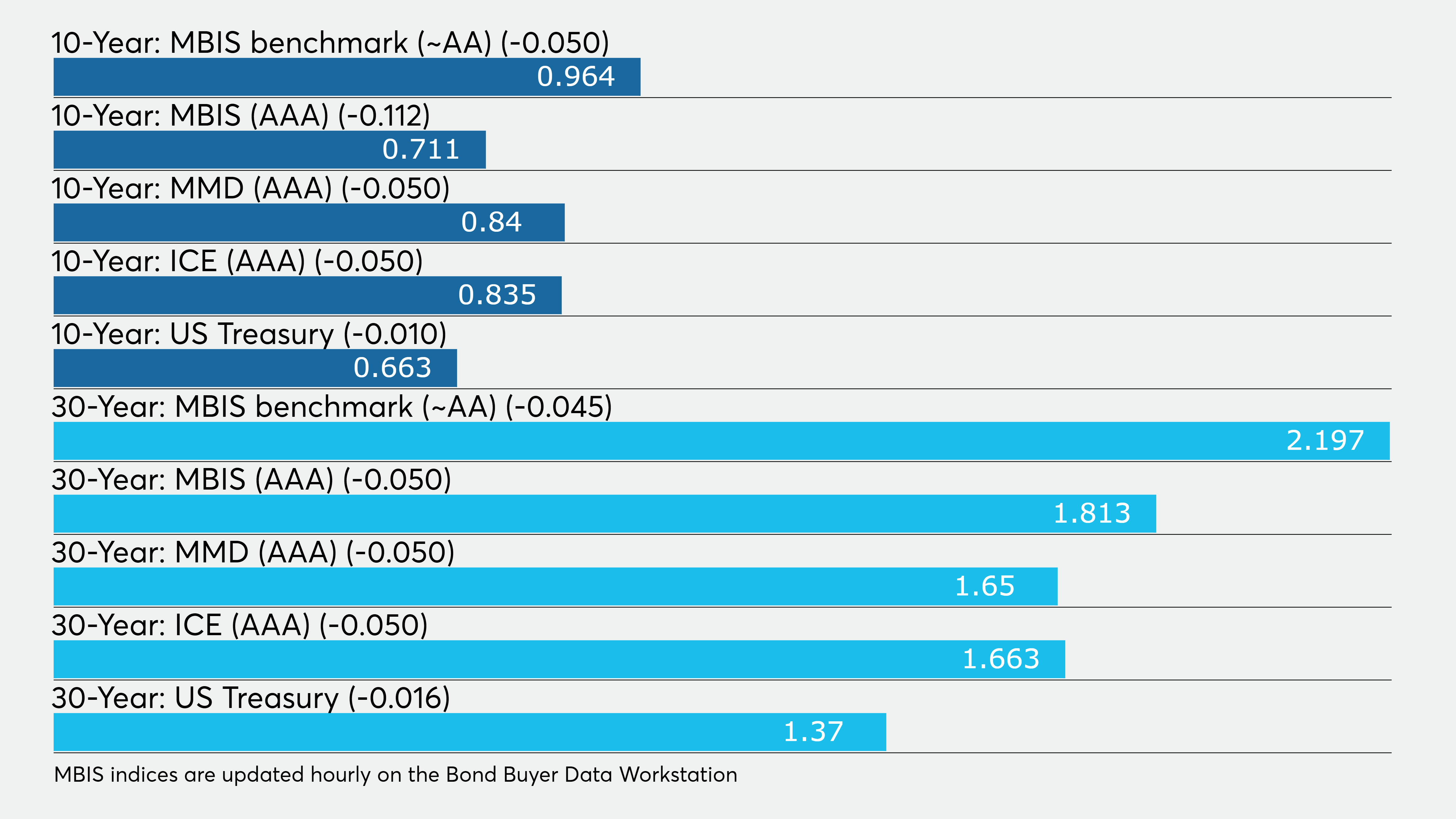 More muni volume is transacting in spread to U.S. Treasuries rather than spread to the benchmark AAA curves where a newer set of buyers is concerned, sources said.

Out of the gates Friday morning, high-grades were again moving benchmarks.

Investor inquiry is going further out the curve for more yield as this rally continues.

The primary supply for the holiday-shortened week is smaller at a little more than $4 billion of a mix of exempt and taxable issuance led by the state of Colorado’s (Aa2/AA-//) $500 million of certificates of participation in a deal led by BofA Securities.

Connecticut is back in the market with $500 million of taxable general obligation bonds after selling $850 million of exempts on Tuesday. The state, A1/A/A+/AA- rated, saw good demand this week. The deal will be led by Siebert Williams Shank & Co., LLC.

The State of Wisconsin also has a day-to-day $200 million of taxable refunding bonds led by Wells Fargo Securities.

Issues out of Texas continue with another housing deal from the Texas Department of Housing and Community Affairs (Aaa/AA+//) with $175 million of non-AMT single-family mortgage revenue bonds with serials from 2021-2031 and terms in 2035, 2040, 2045, 2050 led by RBC Capital Markets.

Another A+ rated California issuer is coming with $152 million of taxable pension obligation bonds led by Cabrera Capital Markets, LLC.

And Guam Waterworks Authority (Baa2/A-/NR/NR) $134 million of water and wastewater system revenue bonds are planned for Thursday led by Citi.

Secondary market
Municipals ended a holiday-shortened trading session on a strong note as yields continued to drop all along the curve.

Munis were also stronger on the MBIS benchmark scale, with yields falling in the 10- and 30-year maturities.

Lipper reports $1.8B inflow
Investors remained bullish on municipal bonds and continued to put cash into bond funds in the latest reporting week. 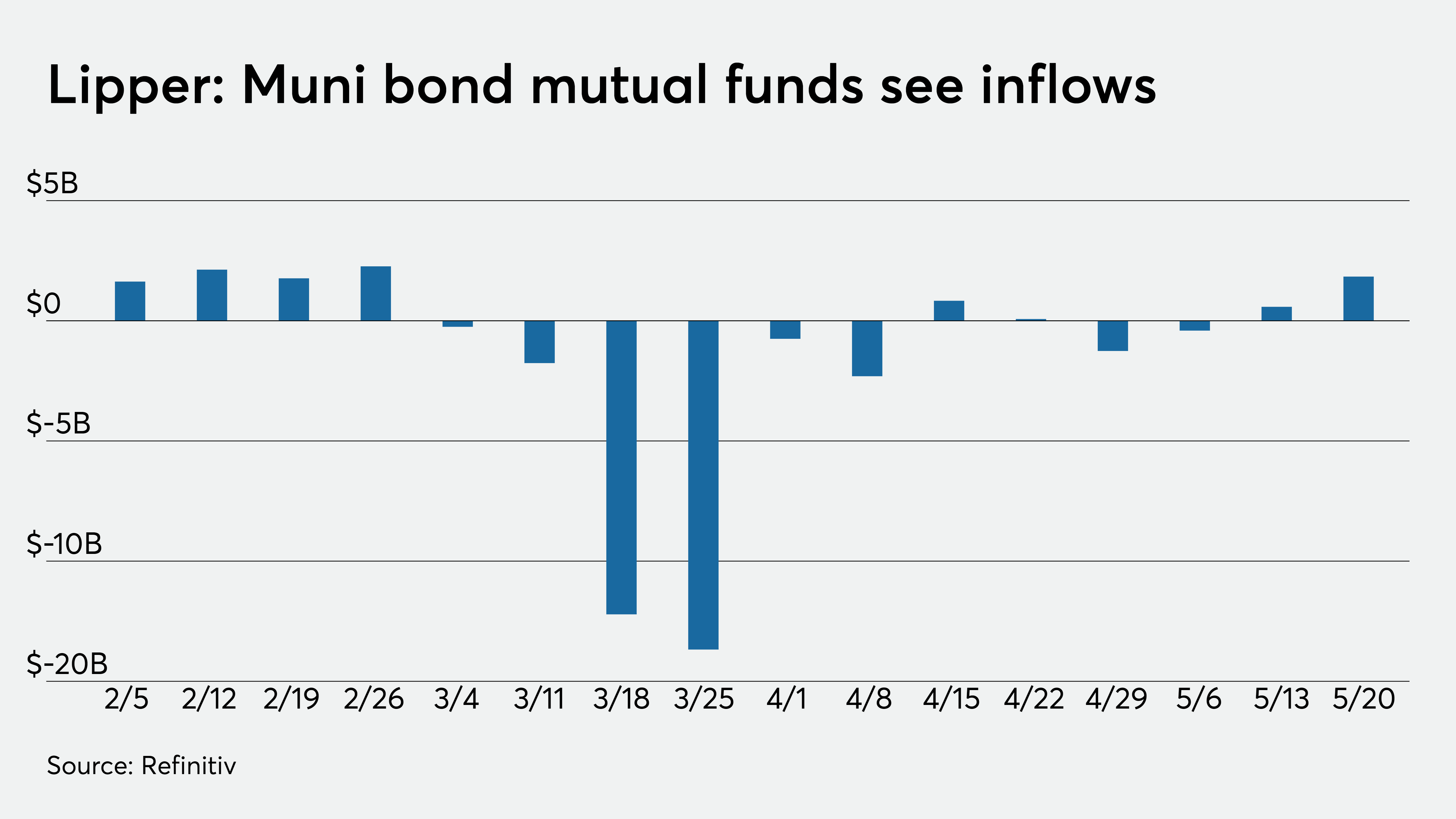 In the week ended May 20, weekly reporting tax-exempt mutual funds saw $1.840 million of inflows, after inflows of $581.943 million in the previous week, according to data released by Refinitiv Lipper Thursday.

The four-week moving average turned positive at $189.374 million, after being in the red at $252.099 million in the previous week.

National funds had inflows of $1.277 billion after inflows of $661.757 million while high-yield muni funds reported inflows of $773.521 million in the latest week, after outflows of $293.599 million the previous week.

“There have been 10 outflow cycles since 1992 and this particular one is following the cycle. Outflows in this cycles were caused by pressured selling in larger mutual fund/ETFs with started in high-yield and moved into investment-grade quickly, and then included SMA managers,” says Eric Fischer, managing director at Wilmington Trust. “We saw rapid outflows (over $30 billion) and have settled into outflows that are much less than and include weeks that are positive. Cycles follow similar patterns in that you see rapid outflows, then periods of mini rallies and sell-offs, until prices stabilize and inflows persist over longer time-frames. Most outflow cycles have lasted 36 weeks or so, but some have lasted much longer.”

He said this cycle would be affected by the pandemic and the responses to it.

“The trajectory of the COVID-19 crisis and the continued responses by federal, state and local governments to the revenue and operational challenges will weigh heavily on the length of this outflow cycle as well as investor comfort levels in municipals as a relatively safe asset class,” he said.

He added that this time was unlike situations seen in the past.

“This particular cycle is different in that the federal government entered very quickly through Congressional action, and expanded Federal Reserve authority to buy municipals and the creation of the MMLF as a continued backstop to the municipal market,” Fischer said.

The weekly average yield to maturity of the Bond Buyer Municipal Bond Index, which is based on 40 long-term bond prices, dropped four basis points to 3.80% from 3.84% the week before.

The Bond Buyer’s Revenue Bond Index declined 11 basis points to 2.79% from 2.90% from the previous week.