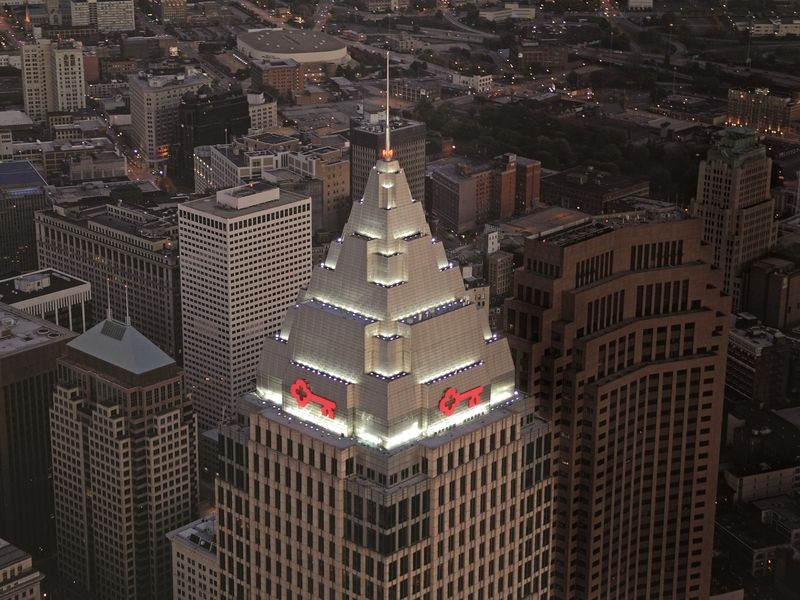 Preceding the coronavirus recession was the financial crisis of 2008. That plunged the country into the Great Recession, which resulted in hundreds of bank failures as piles of loans turned sour.

That wave of failures washed over the country, stripping markets like Northeast Ohio of some prominent, longtime financial institutions.

Think of National City Corp., whose pivot to subprime mortgages sealed its inevitable downfall in 2008, positioning it to be acquired by Pittsburgh’s PNC Financial Services Group — which financed the deal using TARP funds previously denied to National City itself. Then there’s AmTrust Bank, which was placed in receivership by the Federal Deposit Insurance Corp. and eventually sold to New York Community Bank in 2009, where it was rebranded as Ohio Savings Bank.

Referencing Ohio bank failures, particularly National City and AmTrust, Scott O’Donnell, a retired state superintendent of financial institutions, told Crain’s in 2009 that the “prominence of the state has diminished significantly.”

So what are the odds of a repeat of what happened during and post-Great Recession, when 465 banks failed from 2008-12? Is Ohio at risk of losing other major banks? Could KeyBank, the only regional bank still headquartered in Cleveland, be the next National City?

While the future is uncertain, failures similar to the 2008 financial crisis are unlikely. And KeyBank, thanks to leadership by recently retired CEO Beth Mooney, is in particularly good shape.

For one, U.S. banks combined have more capital on hand today to weather a downturn, something that has been imposed on them by regulators post-financial crisis. A November report by the Federal Reserve System shows banks brought close to twice as much capital reserves coming into 2020 as they had in 2007.

On top of that, most banks are making smart defensive moves, such as canceling share buybacks to retain capital while building up loan-loss reserves, as evidenced in various first-quarter earnings reports. All this helps buffer banks against the impending effects of another downturn.

Requirements to build up capital and revise risk-management controls were pieces of heavily politicized bank regulation — which came much to the chagrin of financial institutions — implemented via legislation such as the Dodd-Frank Act. In retrospect, it’s evident those measures have helped steer banks to the positions of strength they enjoy today. Some have prudently gone even further than what’s expected of them. KeyBank, for example, is required to have a total capital ratio of 8%, but it came into 2020 with a ratio of 12.8%.

“We now have a situation where banks aren’t coming to the government for bailouts, but the government is going to banks to help distribute relief programs through (the Paycheck Protection Program). They’re allowing these mortgage forbearances,” said Peter Winter, an analyst with Wedbush Securities covering Midwest banks, including Key. “I think there is no question that Dodd-Frank was the right thing for the bank industry.”

Banks are better diversified in their investments today as well, and that certainly applies in Ohio, said James Thurston, a spokesman for the Ohio Bankers League. Some institutions in markets like Oklahoma and Texas, for instance, are heavily exposed to oil and gas, a sector getting hammered in today’s market. Taking Key as an example, its loan portfolio is only 2.6% in oil and gas, and just 5.1% is in consumer behavior-related industries such as the restaurant, sports and entertainment sectors. This diversification is one of many things that has Winter and other investors feeling good about banks like Key in particular.

Bad banks bear the responsibility for enabling the last downturn with shady lending and business practices, whereas today’s downturn is rooted in a public health crisis. While the Great Recession necessitated a change in how we thought about banking, today’s pandemic necessitates a revamping in how we think about public health.

So while this recession evokes memories of the last, it’s fundamentally different when viewed through the lens of the financial services industry.

At the same time, uncertainty is the theme of today’s world and the recession it’s causing. While risk-management models are much tighter today, none of them accounts for massive unemployment, which soared to a rate of 14.7% this month, noted Kevin Jacques, a former economist with the U.S. Treasury and current Boynton D. Murch Chair in finance at Baldwin Wallace University. Today’s unemployment levels are not factored into current models, he said, meaning there’s potential for significantly more loan losses than what banks have been planning for.

Couple that with petering commercial and consumer loan demand during a downturn, and the low value of loans made at a time when interest rates have fallen back to rock bottom. Bank profitability undoubtedly will suffer for an unknown period of time, and pockets of existing loans inevitably will go bad.

To counter this, the Fed has taken crisis-related steps to support bank liquidity, which is something unique from the last recession.

The greatest uncertainty, however, is how long this pandemic will last. An economy reopening too soon without proper testing or vaccines could have the countereffect of causing a fresh wave of illness that could force states to return to shelter-in-place orders that shut businesses, keep consumers at home and stall economic growth.

“Obviously, an extended shutdown of the economy, a resurgence of the virus leading to a second shutdown, may have grave consequences for some businesses,” said James Gasior, president and CEO of Cortland Bank. “However, I personally do not envision broad bank failures to occur throughout the industry.”

Ohio banks generally are in solid shape, but with the future uncertain, that situation may change.

“Our banks are in great position to sustain several months of issues caused by deferments and so on,” Thurston said. “If this lasts just two to four months, the picture is going to be looking pretty good. Banks can absorb that. But if it really stretches out, there’s where we are going to run into problems.”