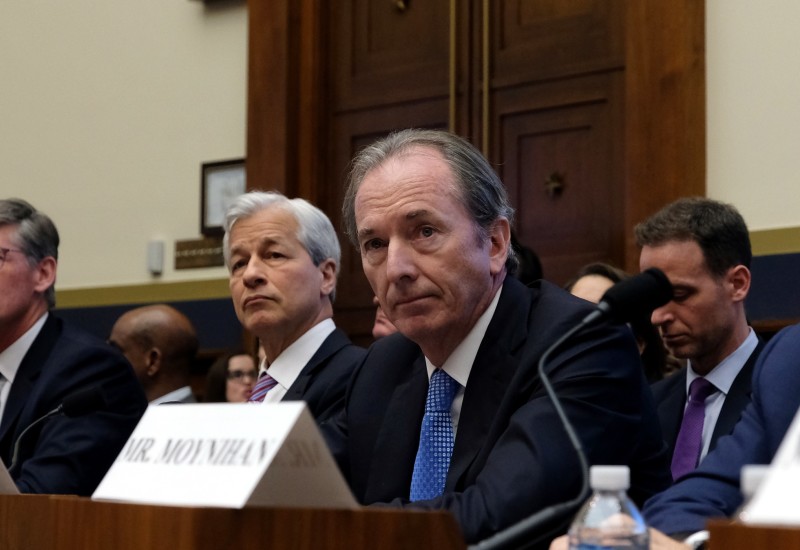 Earlier in the call, Donnelly said, “I think what everybody’s waiting to see is when can we reopen. And that question, I think, also revolves around — and Washington’s already focused on — the testing. How do we make sure that we have the testing in place to reopen?”

That was the only time testing was mentioned on the call. Although Pres. Trump falsely claimed early on that anyone could get a test, the White House still has no plan for widespread testing that might mitigate the contagion’s spread during an economic reboot.

An internal Morgan Stanley note for clients about the call did not mention testing or the prospect of reopening. The note and the call were first reported earlier this week by TYT. Neither company has disputed their authenticity.

On its website, Morgan Stanley says, “It’s unclear whether will have a negative impact on the trajectory of the pandemic or if consumer spending will rebound.” The company urges investors, “Don’t Rush to a Reopening Investment Strategy.”

During the call, McDermott does not specify who he’s referring to as “we” when he says “we definitely agree” with Smith’s point about increasing demand by reopening the economy.

University of Maryland Carey School of Law Prof. Michael Greenberger, former head of trading and markets at the Commodity Futures Trading Commission, told TYT, “It could very well be — if the right hand was talking to the left hand — that Morgan Stanley would not want this to happen.”

He added, “These guys are sitting in a room fighting what history is presenting — that the demand for oil, even if we open up the country, is going down, and in this particular case, people are dying.”

Morgan Stanley is invested in an entire portfolio of oil-industry companies and in March was estimated to be carrying more than $3 billion in outstanding debt from oil and gas loans. Akin Gump counts oil interests including ExxonMobil and Chevron as clients, billing each $50,000 in the first quarter of this year.

Disclosure forms for Akin Gump and Morgan Stanley do not say whether they lobbied to reopen the economy, but lobbyists typically do not list such specific asks. Neither firm responded to TYT’s requests for comment.

An overwhelming majority of Americans still oppose reopening at least some businesses. One poll found that people worldwide prefer focusing on health concerns over reviving their economies.

Three states that reopened — Texas, Tennessee, and Florida — have reported spikes in coronavirus cases. A fourth, Mississippi, paused its reopening after a spike in cases there.

In Congress from 1989 to 2019, Smith got more contributions from donors in oil and gas than any other industry, according to the Center for Responsive Politics.

He also has a long history of elevating climate-change deniers, questioning climate science, and defending corporate emitters of greenhouse gases. During his time in Congress, Smith downplayed the severity of global warming, and though he acknowledged human causes he also pointed to natural cycles and sun spots.

Smith joined Akin Gump early last year. His clients for the firm include several with ties to the oil industry or other financial interests in reopening the economy.

One client, the Texas Public Policy Foundation, has explicitly called for reopening. The TPPF has drawn controversy for its connections to climate-change denial.

In 2017, Trump appointed a TPPF senior fellow to lead a White House office on environmental and energy policy. His appointee, Kathleen Hartnett-White, told the Washington Post, “I am not at all persuaded” by climate-change science. “We’re not standing on a cliff.”

TPPF activities include explaining “the forgotten moral case for fossil fuels.” According to the Washington Post, oil executives help run the TPPF and its founding donors included the Koch Industries oil conglomerate.

Other Smith clients include the city of Laredo, TX; a maker of coronavirus-fighting robots; and a tech company involved in the cattle industry.

TYT reported on Tuesday that Akin Gump’s call with Morgan Stanley included discussion of Democrats potentially agreeing to bail out fossil-fuel companies as part of a new coronavirus stimulus package.

During the call, Smith suggested using the national security implications of oil independence to woo wary Democrats to support a bailout. “I think if the national security argument catches hold as it should, that will justify and maybe persuade some hesitant members of Congress that the energy industry is in a different category and definitely needs to be helped, for the sake of the economy, which also means for the sake of jobs, as well.”

As TYT previously reported, the fracking industry — which is hurting the most — was actively engaged in reducing headcount even before the coronavirus struck.