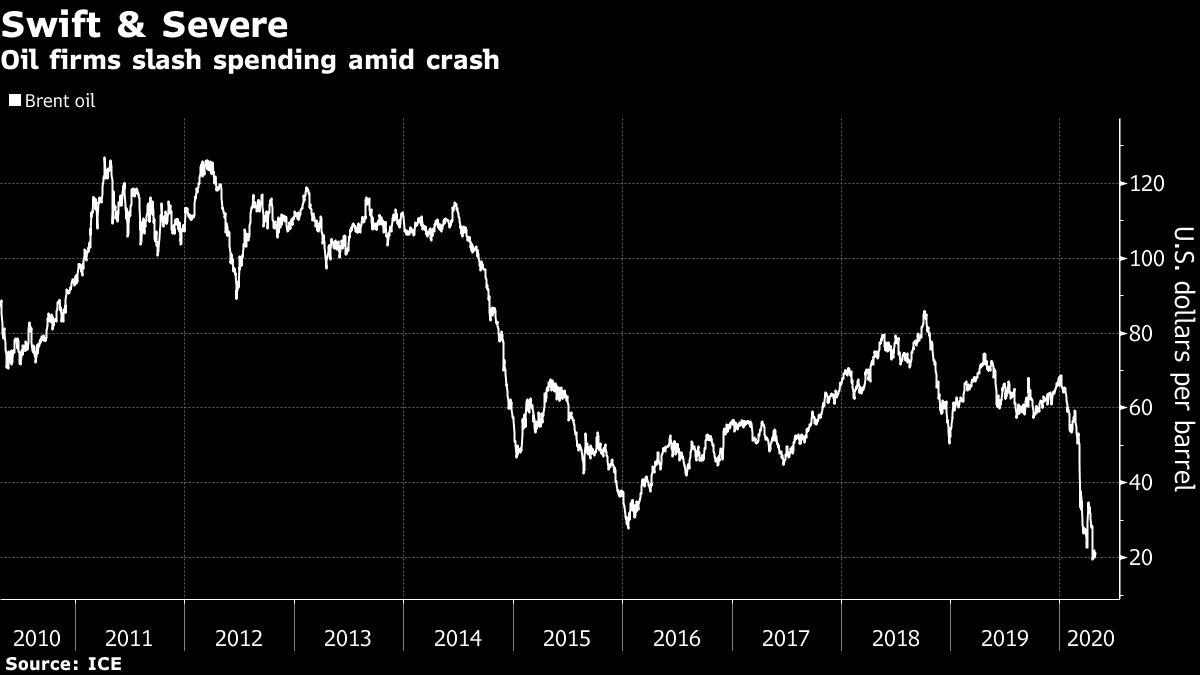 Despite marching orders from China’s top leader Xi Jinping to maximize oil and gas production, the energy sector is bending to the reality of the pandemic-fueled market collapse.

The nation’s three biggest state producers will slash their spending plans this year by a combined $19 billion, with PetroChina Co.’s 32% chop leading the way, the fattest among global majors.

The cuts to capital expenditures, announced Wednesday along with first-quarter results, are among the drastic steps companies are taking to weather the crash in demand and prices amid the coronavirus fight. They also come one year after China’s state firms boosted spending to satisfy calls by President Xi to reverse the decline in oil output that raised the nation’s import dependency.

PetroChina’s shares in Shanghai on Thursday rose as much as 1.8% before paring gains to close up 1.4%. Sinopec Corp. climbed 0.5%. Their Hong Kong-listed stocks, as well as Cnooc’s, were not traded as the market is shut for a holiday.

China’s drillers are particularly sensitive to lower prices because their fields are older and require more work to sustain production, according to Rystad Energy AS. The consultancy estimates the country needs oil at $41 a barrel to break even, compared with $13 for Saudi Arabia and $11 for Iraq. Brent crude, the global benchmark, was hovering above $24 a barrel.

PetroChina plans to lower capex this year to 200 billion yuan ($28 billion), from 295 billion yuan approved earlier this year, the company said on a call with analysts, according to a research note from Sanford C. Bernstein & Co. Meanwhile, Sinopec will cut 20%-25% to 108 billion-115 billion yuan, Bernstein said.

Neither company published the figures in their exchange filings. Sinopec declined to comment, while media representatives for PetroChina didn’t respond to a request for comment.

Cnooc said in its filing that it’s targeting capital expenditure of 75 billion-85 billion yuan this year. That’s down about 11% from a previous forecast of 85 billion-95 billion yuan. It also reduced its production target to 505 million-515 million barrels of oil equivalent for the year, from a previous range of 520 million-530 million.

Cnooc’s cuts will fall more heavily on international projects, but it will still reduce spending and output within China, according to the company’s earnings presentation.

Specific targets for Cnooc’s cuts include Canadian oil sands and North American shale, Chief Financial Officer Xie Weizhi said on a conference call. The company will also review the staff count at its oil sands operations, Xie said. It runs the Long Lake facility in Alberta, which produces 72,000 barrels of bitumen a day, part of its 2012 purchase of Nexen Inc.

PetroChina aims to maintain stable oil production and increase gas output by 5% this year, even as it sets a 30% cost-cut target for every one of its business divisions, Citigroup Inc. said in a note, citing officials on the analyst call. Management bonuses will be halved.

China became the world’s largest oil importer in 2017 and top gas buyer the next year. The growing dependence on energy imports and the start of a trade dispute with the U.S. provoked President Xi in August 2018 to urge the country’s energy Goliaths to boost domestic output.

During the price crash of 2016, PetroChina, the country’s biggest oil company, started shutting fields it described as having “no hope” of being profitable. Production plummeted then, from a peak of 4.3 million barrels a day in 2015, when it was the world’s fifth-biggest producer, to 3.8 million barrels in 2018, when it fell to No. 8.

The cuts announced Wednesday are the first significant reductions by China’s state oil industry this year. They follow similar reductions made by global majors, according to data compiled by Bloomberg Intelligence, that include the following:

Highlights of the first-quarter results of China’s three majors were:

PetroChina and Sinopec reported net losses as global crude prices collapsed and refining margins crashed due to severe oversupply and plummeting demand during the coronavirus pandemic. Both companies also cited losses on the value of their inventories in storage.Cnooc’s revenue fell as a drop in realized oil prices overwhelmed a 9.5% increase in net production from the previous year. The company didn’t report a profit figure.

bloomberg.com” data-reactid=”65″>For more articles like this, please visit us at bloomberg.com