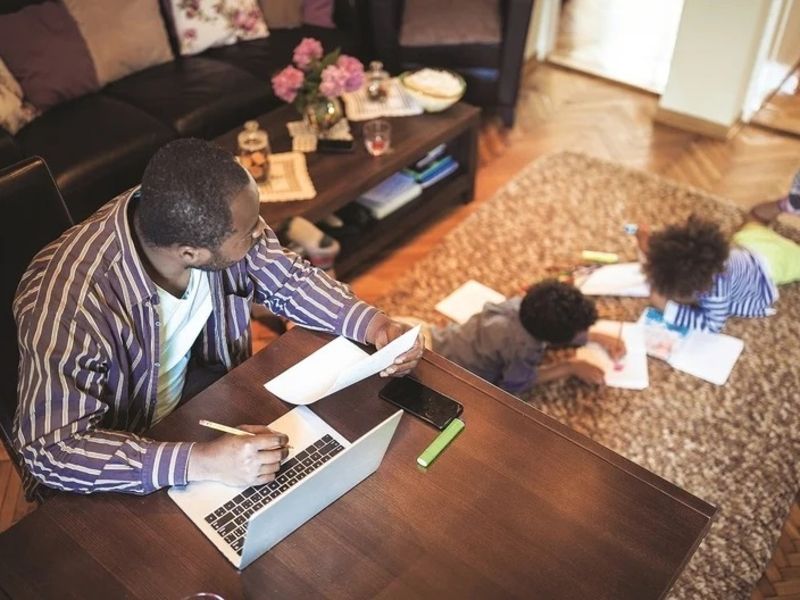 An executive at JPMorgan Chase & Co. gets unapologetic messages from colleagues on nights and weekends, including a notably demanding one on Easter Sunday. A web designer whose bedroom doubles as an office has to set an alarm to remind himself to eat during his nonstop workday. At Intel Corp., a vice president with four kids logs 13-hour days while attempting to juggle her parenting duties and her job.

Seven weeks into a nationwide work-from-home experiment with no end in sight, whatever boundaries remained between work and life have almost entirely disappeared.

With many living a few steps from their offices, America’s always-on work culture has reached new heights. The 9-to-5 workday, or any semblance of it, seems like a relic of a bygone era. Long gone are the regretful formalities for calling or emailing at inappropriate times. Burnt-out employees feel like they have even less free time than when they wasted hours commuting.

“I honest to goodness am wearing the exact same outfit that I started with on Monday,” Rachel Mushahwar, the vice president and general manager of U.S. sales and marketing at Intel, said in an interview one Thursday. “I think I’ve showered three times.”

Some predicted the great work-from-home migration of the pandemic would usher-in a new age of flexible work arrangements. As of 2017, just 3 percent of full-time workers in the U.S. said they “primarily” worked out of a home office, according to a Census Bureau survey. Then millions sheltered at home for what was originally thought to be a temporary hiatus. Many mapped out plans to fill time they would’ve spent commuting to take up new hobbies, like learning a foreign language, baking or getting into the best shape of their lives. It looked like the beginnings of a telecommuting revolution.

A month and a half later, people are overworked, stressed and eager to get back to the office. In the U.S., homebound employees are logging three hours more per day on the job than before city and statewide lockdowns, according to data from NordVPN, which tracks when users connect and disconnect from its service. Out of all countries that NordVPN tracks, U.S. workers had tacked on the most hours. In France, Spain, and the U.K., the day has stretched an additional two hours, NordVPN’s data found. Italy saw no change at all.

The contours of the workday have changed, too. Without commutes, wake-up times have shifted later, NordVPN found, but peak email time has crept up an hour to 9 a.m., according to data from email client Superhuman. Employees are also logging back in late at night. Surfshark, another VPN provider, has seen spikes in usage from midnight to 3 a.m. that were not present before the COVID-19 outbreak.

Huda Idrees, the CEO of Dot Health, a Toronto-based technology startup, confirms her 15 employees are working, on average, 12-hour days, up from nine hours pre-pandemic. “We’re at our computers very early because there’s no commute time,” she said. “And because no one is going out in the evenings, we’re also always there.”

One big problem is there’s no escape. With nothing much to do and nowhere to go, people feel like they have no legitimate excuse for being unavailable. One JPMorgan employee interrupted his morning shower to join an impromptu meeting after seeing a message from a colleague on his Apple Watch. By the time he dried off and logged back on, he was five minutes late.

(Some people spoke on the condition of anonymity because they didn’t want to be seen as complaining about telecommuting while millions of Americans lose their jobs or risk their lives on the front lines.)

Then there’s the fact that people have turned their living spaces into makeshift offices, making it nearly impossible to disconnect. Having an extra room helps, but not much, said John Foster, who has been home in Tuscumbia, Ala., since mid-March doing financial compliance for a manufacturing company. His workspace is right next to the living room. “You walk by 20 times a day” he said. “Every time you pass there, you’re not escaping work.”

At this point, he even misses his commute. “Usually you have that downtime to drive home or to kind of get ramped up for the day,” he said.

Others say they feel pressure from bosses to prove they’re working, especially as the economy takes a hit and the prospect of layoffs looms. At Constellation Software Inc. in Toronto, more than 100 employees got an email from a superior that said: “Don’t get distracted because you are on your own. It is easy to get into bad habits, the lure of the internet, the endless box sets. Just think, would I do this in the office? If it’s a no, don’t do it,” read the email reviewed by Bloomberg. “You know we will be watching closely,” the same manager wrote in an earlier message. A Constellation Software representative didn’t return phone and email messages seeking comment.

In reality, despite stereotypes that telecommuting breeds slacking, early data suggest productivity is up, at least at some companies. “We’ve seen, anecdotally, some increases in productivity for some of our developers as they’re hunkered and focused at home,” Bank of New York Mellon Corp. CFO Mike Santomassimo said.

At JPMorgan, where 70 percent of the bank’s quarter-million employees are working remotely, productivity has gone up for certain types of jobs as workers spend less time going to meetings, attending town halls or completing training sessions, according to a person with knowledge of the matter. A JPMorgan spokesperson declined to comment.

An internal case study at Publicis Sapient, an IT consulting company that tracked work by 410 employees on roughly 40 tech-focused projects for a large New York-based investment bank also found a productivity bump. Between March 16 and April 10, tasks were completed at either the same rate or faster than those before the crisis.

“When you’re virtual you’re less distracted — nobody’s disappearing for coffee for a while or going and disappearing to socialize,” said Dave Donovan, who leads the Americas global financial services practice for Publicis Sapient. “Clients are more reachable, too.”

Given the early results, Donovan thinks remote work is here to stay. “Once the genie’s out of the bottle it’s not going to go back,” he said.

The gains haven’t come without costs. By early April, about 45 percent of workers said they were burned out, according to a survey of 1,001 U.S. employees by Eagle Hill Consulting. Almost half attributed the mental toll to an increased workload, the challenge of juggling personal and professional life, and a lack of communication and support from their employer. Maintaining employee morale has proved difficult, said two-thirds of human resources professionals surveyed by the Society for Human Resource Management earlier this month.

Those crammed into smaller quarters are also at a higher risk of developing high blood pressure than colleagues with extra rooms, according to preliminary research by Tessa West, an associate professor of psychology at New York University.

Parents with kids at home are stretched particularly thin, as they squeeze work in between child-care duties, which now include virtual learning sessions. In two-thirds of married couples with children in the U.S., both parents work, leaving nobody available to watch the kids while the other partner is on the job.

A 31-year-old web designer at a medium-size software company said he’s starting to lose steam working 12-hour days from his tiny bedroom to meet demands of clients and supervisors, who expect him to immediately respond to phone calls and emails, even on the weekends.

His apartment doesn’t have an office and his roommates, a woman and her small child, play and watch TV in the living room. The setup has made it impossible to disconnect from work, but he feels pressure to work harder than normal. Some of his colleagues have already been laid off.

There’s only so much companies can do with schools, daycares and offices still closed for what seems like the indefinite future. Even the ambitious plan outlined by President Donald Trump for opening up the economy suggests students wouldn’t return to schools for weeks. In Michigan, Gov. Gretchen Whitmer halted all in-person classroom instruction for the remainder of the school year.

At this point, even kids are wondering when things will go back to the way the were. Last week, Mushahwar’s 8-year-old asked when this was all going to end.

“I just sat at the breakfast table,” the Intel executive said. “I don’t have a good answer for him.”