Emissions Are Way Down. No, That’s Not All Good News for the Environment.  Mother Jones 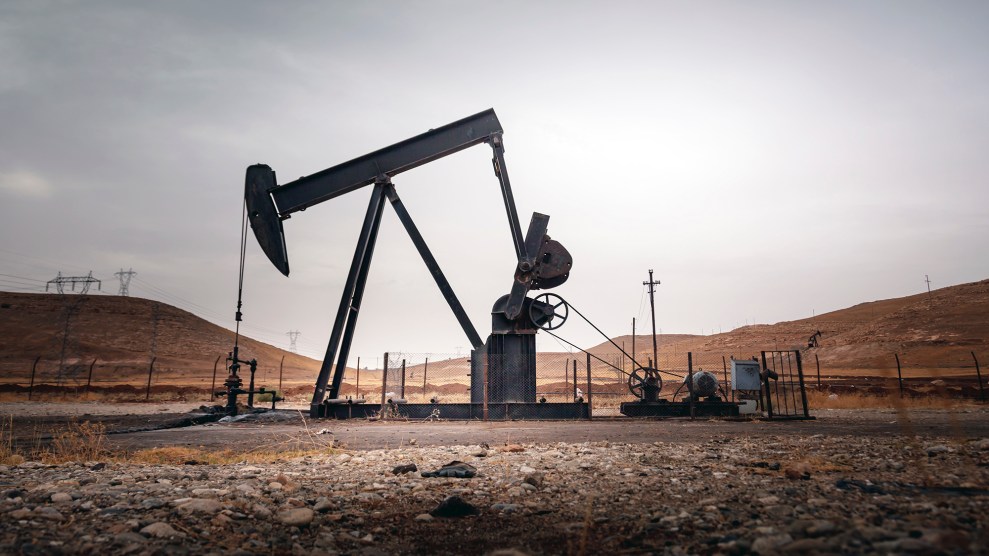 The coronavirus is a rapidly developing news story, so some of the content in this article might be out of date. Check out our most recent coverage of the coronavirus crisis, and subscribe to Mother Jones’ newsletters.

As the coronavirus cripples world economies, greenhouse gas emissions are plummeting: This year, they could drop by as much as 5.5 percent—the largest decrease ever recorded. On Monday, the price of oil went negative, meaning storing oil now costs more than the oil itself. Since we’re burning less gas and fuel, air pollution has dropped 30 percent in northeastern cities, and Los Angeles’ notorious smoggy skyline has cleared.

You might be thinking all this is great news for the environment. It’s a nice idea—but the real story is more complicated. “You don’t want companies collapsing like this,” says Andrew Logan, oil and gas director of Ceres, a think tank focused on sustainable investment. “Even the most ardent climate advocate shouldn’t wish for a chaotic transition in this sector. A chaotic transition brings all sort of pain to workers and also the environment.”

“Even the most ardent climate advocate shouldn’t wish for a chaotic transition in this sector.”

It helps to think of COVID-19 as a test run—a very painful one—of what an industry in decline will look like. “We’re seeing, as is case the now, what the cliff looks like if everyone shuts down at the same time,” Logan says.

With a glut of supply, North America producers Exxon, Shell, Devon Energy, and Cenovus Energy have already collectively announced spending cuts this year totaling $50 billion, according to the Wall Street Journal. In North Dakota, Trump donor Harold Hamm’s Continental Resources drilling company has cut output by 30 percent the next two months. In Canada, the famously destructive tar sands are too expensive to mine and refine on oil prices this cheap. Even the Southwest’s Permian Basin, the most productive region for oil and gas in the United States, is expected to see dramatic closures.

Environmentalists are worried about what comes next, because of the many unintended consequences of market chaos. For starters, when gas prices tank, Americans will likely start buying more cars and taking more road trips, driving up demand all over again.

Other environmental problems aren’t quite so obvious. Lorne Stockman, a senior research analyst with the climate advocacy group Oil Change International, worries that the coming bankruptcies this year “are an environmental nightmare in the making,” with “wells left to rot as bankruptcy proceedings are going through.”

As the industry contracts, some drilling operations will simply leave their wells, and many don’t have the funding set aside to take proper precautions to make sure greenhouse gases and other pollutants don’t leak out. Environmental advocates are especially worried about leaks of methane, a particularly potent greenhouse gas.

Abandoned wells are already a big problem. Even in relatively good times, oil and gas wells still dry up. When they do, they might be sold to smaller, sometimes less scrupulous operators to tap what’s left in the well. Then those operators eventually abandon the well or go bankrupt. They can’t afford to clean up the site, which involves plugging the well with cement to avoid leaks into groundwater.

We don’t know for sure how many of these wells exist around the country, though the EPA estimates there are more than 1.5 million of them that have accumulated over a century. Wyoming has had thousands it’s in the process of plugging, and Pennsylvania has 8,000. Taxpayers will eventually pay for both cleanup and environmental damages.

“When the market falls like this one of the first things that will go is the limited capacity for inspection.”

Drilling operations that don’t shutter will have to find ways to cut costs. In boom times, methane is valuable to drillers because it can be captured and reused for fuel. But when oil and natural gas prices have crashed in the past, drillers have sought to get rid of excess methane in the cheapest way possible—by burning it (a process known as “flaring”) or simply letting it leak into the atmosphere (called “venting”). Both processes can contribute to climate change and contaminate surrounding communities. Flaring and venting worry many environmental advocates. The International Energy Agency notes that “low natural gas prices may lead to increases in flaring or venting, and regulatory oversight of oil and gas operations could be scaled back.”

Methane emissions hit a 20-year high last year, according to the National Oceanic and Atmospheric Administration. Although scientists don’t fully understand why, they believe that fracking operations may dramatically underestimate the methane they release. According to the Environmental Defense Fund, operations typically lose 15 times the rate that producers report because of malfunctions and intentional venting. The COVID-19 crisis could lead to more leaks, because companies won’t have any incentive to capture methane to use for fuel.

Amid the turbulence in the oil sector, the Trump administration has continued to roll back environmental regulations, and it has already undone Obama-era rules targeting methane emissions from oil and gas operations.

Nathalie Eddy, a field advocate for the environmental watchdog Earthworks, is worried that environmental contamination will be made worse as the administration weakens rules. “When the market falls like this one of the first things that will go is the limited capacity for inspection,” she says. The EPA, Department of the Interior, and Department of Transportation have already announced they will suspend some routine inspections and monitoring, including pipeline reporting and field inspections, and waive civil penalties if violators say COVID-19 was a factor.

Climate advocates have urged the EPA and Department of the Interior to require companies to monitor methane leaks and set aside money for their cleanup. To help the sector recoup the lost revenue, they propose a job stimulus program aimed at reclaiming these sites for the double-duty benefit of a clean environment and keeping workers employed.

But so far, those pleas are going unanswered. The Trump administration has floated several schemes for helping the oil sector: During the first round of stimulus, congressional Democrats managed to shoot down the oil industry’s bailout request. Now, the administration is considering paying producers to leave crude in the ground until the global glut shrinks. Meanwhile, the major banks want some collateral for the $200 billion they are owed from oil companies: According to Reuters, JPMorgan Chase, Wells Fargo, Bank of America, and Citigroup could even seize the industry’s assets, which could pose an enormous conflict of interest for a financial sector that just months ago was signaling a move away from the oil sector.

So far, it looks like the short-term emissions drop won’t result in any lasting policy improvements, Stockman says. “We have seen the wrong kind of stimulus that isn’t aimed at changing our relationship to fossil fuels.”