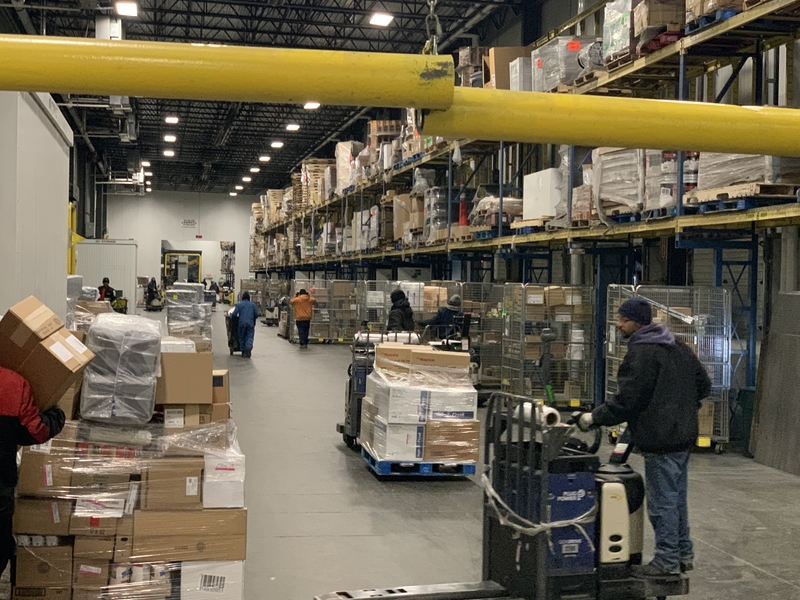 Food supplies are generally healthy, with a few exceptions, despite the skyrocketing demand that’s left many grocery store shelves sparse or empty during the pandemic, distributors said.

So why aren’t grocery store shelves as full as they used to be?

Food production, processing and distribution systems weren’t set up to handle the retail onslaught that came with stay-home orders in Michigan and other parts of the country amid the pandemic. Much of the production had been geared to food service quantities required by restaurants, schools and other large users. Food processors and distributors don’t have the equipment and packaging to just flip the switch to produce more retail products.

At the same time, food producers and distributors like Warren-based Lipari Foods LLC and Grand Rapids-based SpartanNash Co. are facing labor and capacity issues due to COVID-19 illnesses.

And those things are adding up to frustrations for consumers looking to get their fill at grocery stores.

When the pandemic first showed its face in the region, Lipari was delivering orders that had been placed previously as part of two-week replenishment cycles, said CEO Thom Lipari.

But consumer demand surged with the closures of schools, workplaces and restaurants.

Where workers grabbed lunch at the corner deli and children ate in school cafeterias, people in Michigan and across the country began eating every meal at their kitchen tables.

Stores have struggled to keep food and other products stocked since the pandemic began in March, and grocery pickup and delivery orders continue to be rampant with unavailable and substituted items.

There are still actual shortages of hand sanitizer and cleaning products based on demand from consumers, first-responders, health care professionals, nonprofits and essential companies that continue to operate. Toilet paper shortages are also continuing, and there are other product-by-product shortages distributors said.

Eggs are also in short supply in some areas as moms and dads become short-order cooks at home.

There’s lot of talk about eggs and why egg prices have gone up, said Meredith Gremel, vice president, corporate affairs and communications for SpartanNash and executive director of the SpartanNash Foundation. There are only so many hens that can lay eggs right now, and demand has gone up as much as 500 percent in some areas.

“What are you going to do — tell the chicken to lay (its) eggs faster?” Gremel said.

Juice has become a hot commodity as people seek to up their vitamin C intake at the same time bottlers are pulling back on juice packing to increase milk production, Lipari said.

And sales of flour, which typically pick up around the holidays when cookie baking starts, have also risen as families try their hand at homemade bread and other baked goods.

Overall, the supply of available food and household items is healthy, Lipari said.

But with most people eating the majority of their meals at home, demand has shifted to retail channels. And that’s putting a kink in how food manufacturers and processors get their product from plants to consumers’ shopping carts.

Typical production processes were set up to mete out some percentage of food into food service portions or quantities for restaurants and schools, Lipari said.

Schools, for example, used to buy large quantities of little cartons of milk. There’s a glut of milk now, given that schools aren’t purchasing it anymore.

“The raw material is there, but it’s converting it into what consumers are looking for” that’s the issue, Lipari said.

“The system was geared to put the majority of that milk into cartons.”

But people want to buy milk in larger cartons or jugs or made into yogurt and cheese for the meals they’re eating at home, he said.

“Businesses don’t have that kind of capacity sitting around waiting for something like this (pandemic) to happen. These are multimillion dollar machines, and it takes a year to make them. It isn’t something they can just flip the switch on.”

Last week, Lipari said he and his team are starting to hear that some manufacturers are beginning to convert food service production into retail production. But they are also working to solve logistical issues, such as how to transport the increased perishable food products moving into retail channels with a limited number of refrigerated trucks.

“Even though there may have been many trucks not being used in other industries, they are not equipped to ship certain categories of food products,” Lipari said.

While food processors are figuring out how to shift production and solve logistical challenges of moving that food, workforce issues are hitting production and distribution.

The recent rash of COVID-19 cases at a Smithfield pork processing plant in Sioux Falls, S.D., followed by escalating cases reported at other food manufacturers is impacting food production.

Lipari Foods distributes food to 16 states across the Midwest and into Kentucky, Tennessee and Florida, all from its Michigan base.

On any given day, 40 percent of Lipari’s warehousing staff call in, the company’s CEO said.

“Attendance has been a real challenge … a lot of people are concerned.”

There are also employees living with an elderly parent and a driver with a daughter who has respiratory issues, he said.

“That’s been our challenge, to get people to understand their country needs them,” Lipari said.

“If we can’t get food to the stores, we’re going to have another big problem.”

The company has brought in nurses to screen employees as they come into work and added staff to do constant sanitation on any touch points, Lipari said.

Recently, it also launched a campaign with its drivers, posting YouTube videos to thank warehouse staff for enabling drivers to continue to work.

“We’re doing a lot to make the employees understand how important their jobs are right now,” Lipari said.

To supplement its own staff, it’s borrowing hi-lo drivers, selectors who pick food for grocery stores by the pallet and other warehouse staff from food service suppliers like Warren-based Reinhart Foodservice LLC that are seeing lower volumes of work with school and restaurant closures. Between those efforts, Lipari has been able to staff two 10-12-hour basic shifts and three hi-lo shifts, Lipari said.

Initially, there were concerns shortages were due to people hoarding, Gremel said.

“But now it’s because people don’t have as many options. They are staying at home.”

SpartanNash, which supplies independent corporate-owned and family-owned stores and military commissaries in Michigan and 17 other states, has seen the same concerns ripple through its distribution employees, Gremel said. The West Michigan company has hired 2,000 new employees over the past three weeks across its corporate-owned grocery stores and warehouse operations. About 850 were for spots in its warehouses, she said.

“One of our deli people described it, saying, ‘It’s like black Friday every day,'” Gremel said.

SpartanNash has given two rounds of bonuses to help with talent attraction and retention.

Farmers and food processors are having the same hiring needs that distributors are, Gremel said.

“When we first came out of the gate with this, we were seeing two to three times the sales volume in terms of what we’re selling in our stores, vs. pre-COVID,” she said.

“It’s continuing and hasn’t let up.”