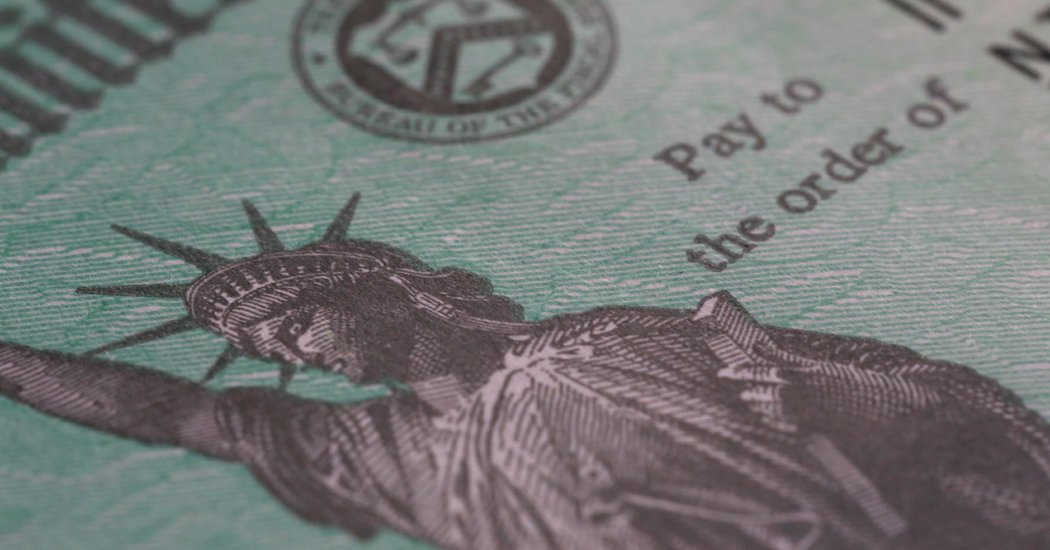 For some struggling Americans, the arrival of a deposit from the Treasury Department to help with basic expenses like rent and groceries during the coronavirus crisis was something to count on — until their financial institutions got in the way.

Frustrated customers say banks have been seizing some, or all, of their relief payments because their accounts are overdrawn, in some cases as a result of pandemic-caused hardship.

Joseph James Davis Jr. said his bank in Mena, Ark., took more than $2,000 after he fell victim to a check-cashing scam in a moment of desperation.

Mr. Davis said the work for his landscaping business had dried up because of the coronavirus crisis, so he responded to an online ad that promised payment to anyone who would agree to put advertising decals on a vehicle.

Mr. Davis was sent a check, but was told he had to pay for the decals with some of the money. After he sent off the payment, his bank, Union Bank of Mena, told him the check had been bogus and he had to repay it $2,784.

Kevin Williams, president of Union Bank of Mena, did not respond to calls and emails seeking comment on Thursday.

The phenomenon is swiftly becoming a political issue, with Treasury Secretary Steven Mnuchin fielding calls from senators urging him to ensure that relief money isn’t garnished. Banks are legally allowed to withhold funds that go into accounts that have negative balances, and no specific provision in the CARES Act, the $2 trillion relief package that authorized the stimulus payments, prevents banks from taking customers’ stimulus money to cover debts.

USAA, a financial services company that serves members of the military and their families, was also garnishing stimulus payments before reversing itself on Thursday.

A Minneapolis couple with a USAA account — a disabled veteran and his wife — were anxiously awaiting their relief payments, the wife said. She and her young family had just moved into their own apartment after living with their extended family while they struggled to get out from under thousands of dollars of debt.

But the woman, who did not want to be identified by name out of concern that her financial troubles could harm the careers of family members, had to quit her job after being unable to find child care when some Minnesota day care centers closed because of the virus. She had been counting on a relief payment to help pay rent and buy formula for her 10-month-old daughter.

But USAA told the couple that it was keeping the money because their account was overdrawn.

The woman showed The New York Times screenshots of a Twitter exchange between her husband and a USAA representative. Using USAA’s verified Twitter account, the representative explained that if the family’s bank account had a negative balance, “any deposits to the account will go toward the negative amount owed to the bank.”

After this article was published on Thursday, USAA said it would pause overdraft collections for the next 90 days.

“This will allow members access to their full stimulus payment to help cover the costs of rent, food and other important necessities,” Matthew Hartwig, a bank spokesman, said in an email. “Beginning as early as today, we will apply this policy retroactively to any member accounts with a negative balance at the time the first stimulus checks were deposited, so that members will have access to their stimulus funds.”

The government checks are meant to cushion the pandemic’s financial blow to some of the hardest-hit Americans. Anyone who earns up to $75,000 in adjusted gross annual income and has a Social Security number will receive $1,200. Married couples who file joint tax returns will receive $2,400 if their adjusted gross income is under $150,000. The amount declines for those who make more.

In a March 2018 survey, the Pew Charitable Trusts, a nonpartisan research institute, found that more than 39 million Americans had incurred overdraft fees within the past year, with people essentially using overdrafting as credit.

Several politicians are calling for banks to stop garnishing stimulus payments. On Wednesday, Senators Elizabeth Warren of Massachusetts and Sherrod Brown of Ohio, both Democrats, implored the head of a bank trade group to tell its members to halt the practice.

“For weeks, we have pressed the Treasury Department to exercise its authority and ensure that Americans receive the full amount of their stimulus payments,” the senators wrote in a letter to Rob Nichols, the chief executive of the American Bankers Association. “While Treasury has refused to follow congressional intent, that does not give banks license to steal the stimulus payments from their customers.”

By contrast, the CARES Act specifically prohibits garnishing stimulus money for state or federal debts, except for court-mandated child support.

Not every bank is keeping its overdrawn customers’ money. Bank of America, JPMorgan Chase, Citibank and Wells Fargo — the nation’s four biggest banks — are pausing their collections on negative account balances to give customers access to the stimulus.

“We are temporarily crediting the overdrawn amount for customers, giving them full access to their stimulus payment,” said Anne Pace, a spokeswoman for Chase, in an email to The Times on Wednesday. “We hope this gives them a chance to catch their breath.”

On Monday, a group of 25 state attorneys general also registered their disapproval of garnishing relief checks. “During this public health and economic crisis, the states do not believe that the billions of dollars appropriated by Congress to help keep hardworking Americans afloat should be subject to garnishment,” they wrote in a letter to Mr. Mnuchin.

The American Prospect this week unearthed an audio recording of a Treasury official discussing with banks how stimulus money should be handled when there are outstanding loans or other debts. The official, Ronda Kent, said that “there’s nothing in the law that precludes that action” and that it was up to the discretion of the banks.

Progressive watchdog groups have seized on the issue to criticize the Trump administration’s handling of the economic crisis, describing it as a giveaway for banks.

“This money should be going toward food, rent and medicine — it’s not the time to hand out favors to debt-collection industry donors or pad some big bank’s bottom line,” said Jeremy Funk, a spokesman for Allied Progress. “Secretary Mnuchin needs to ensure that these $1,200 checks go straight into Americans’ pockets, where they belong.”

Another hopeful stimulus recipient described having to fight for hours with her credit union on Wednesday before it would release the full $2,400 deposit. Initially, the institution, Digital Credit Union, which is based in Marlborough, Mass., kept $1,000 to make up for the customer’s overdrawn account balance.

The customer did not want to be identified because she was worried that the lender would close her accounts or penalize her for speaking publicly. She and her husband have four children. His hours at a group home for children were recently cut to three days a week, she said. She is out of work.

She said that after multiple calls, a representative had agreed to return the $1,000 to her. She said she was sharing her story because she was worried that other people would not have the stamina to fight for the money the way she had.

Edward Niser, a spokesman for Digital Credit Union, said in an email that the institution could not comment on individuals, citing privacy reasons.

“In these difficult times,” he said, “we are there to support our members and we are making every possible effort to follow evolving federal and state guidance.”