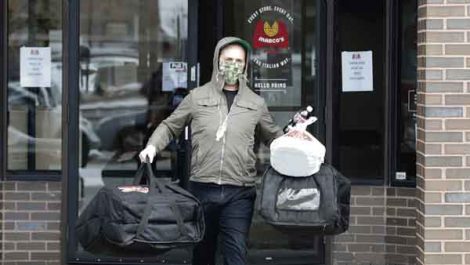 Brian Turnquist delivers pizzas during the coronavirus pandemic, Thursday, April 16, 2020, in Beachwood, Ohio. Ohio has paid a record $227 million to more than 271,000 individuals who filed for unemployment in the past four weeks. Nationally, a record 22 million people have sought jobless benefits, including 5.2 million new claims reported Thursday. (AP Photo/Tony Dejak)

Nearly 160,000 more Ohioans and 5.2 million more Americans applied for unemployment benefits last week, the fourth week since the novel coronavirus put its chokehold on the local, state and national economies.

For the month, government reports Thursday show 855,197 people in Ohio and roughly 22 million across the U.S. now have sought jobless benefits, by far the worst stretch of job losses on record.

For Ohio, the total of claims in the last four weeks is 139,685 more than all of the last two years — 715,512 — according to the Ohio Department of Job and Family Services. The national numbers mean roughly 1 in 7 workers are out of a job.

Claims are down from their all-time high of 6.8 million the week of March 28, but “that’s the only glimmer of good news,” said Gus Faucher, chief economist for Pittsburgh-based PNC Financial Services.

The number of claims over the past four weeks averaged 5.5 million, by far the highest average since 1967. And excluding the past month, the previous high for the four-week average was 674,000 in the fall of 1982, according to Faucher.

“Claims now are more than eight times that previous high,” he said.

The 22 million Americans who applied for benefits represent about 13 percent of the labor force in March. Not all of them, however, will be counted as unemployed in the U.S. jobs report.

“Still, the labor market has imploded as the public health response to the coronavirus, especially restrictions on movement, has led to a sharp drop in economic activity,” Faucher said. “Most of the early job losses were in restaurants and retail, but they are now also spreading to other industries, such as manufacturing, construction, health care and social assistance, and professional / business services.”

Gov. Mike DeWine said Thursday planning is underway to gradually get Ohio’s economy moving again starting May 1, but he cautioned it would be slow going and a delicate balance to getting people back to work while continuing to keep people safe from COVID-19.

Reopening business will be phased in, starting with companies that are able to put into place stringent health and safety practices. Some of the lessons learned from companies that remained open during the pandemic can be applied, and Lt. Gov. Jon Husted has and will continue to work with business leaders across Ohio to develop practices to follow.

“It is essential though that as we start back, we do this the right way. We must get this right because the stakes are very high,” DeWine said. “If we don’t do it right, the consequences are horrendous. What we do not want to do is to start back, start getting back, getting businesses up, getting small businesses up and then have a disaster, a huge spike in the number of people who test positive and are in the hospital, that would be disastrous.”

The grim national figures point to an economy that is tumbling into what appears to be a calamitous recession. The nation’s output could shrink by roughly 10.5 percent before it starts to rebound, according to Ryan Sweet, an economist at Moody’s Analytics. That would be more than double the contraction that occurred during the 2008-2009 recession, which was the worst downturn since the Great Depression of the 1930s.

All businesses deemed nonessential have been closed in nearly every state. Deep job losses have been inflicted across nearly every industry. Some economists say the unemployment rate could reach as high as 20 percent in April, which would be the highest rate since the Depression. By comparison, unemployment never topped 10 percent during the Great Recession.

Up to 50 million jobs are vulnerable to coronavirus-related layoffs, economists say — about one-third of all positions in the United States. That figure is based on a calculation of jobs that are deemed nonessential by state and federal governments and that cannot be done from home.

It’s unlikely that all those workers will be laid off or file for unemployment benefits. But it suggests the extraordinary magnitude of unemployment that could result from the pandemic.

“This crisis combines the scale of a national economic downturn with the pace of a natural disaster,” said Daniel Zhao, senior economist at Glassdoor. “And that’s really unprecedented in American economic history.”

The Associated Press contributed to this story.

Today’s breaking news and more in your inbox