This briefing is no longer updating. Read the latest developments in the coronavirus outbreak here.

Here’s what you need to know:

Stocks tumbled on Wednesday as investors faced a stream of bad news about the economic damage caused by efforts to contain the coronavirus pandemic, including data that showed a historic plunge in retail sales and a slump in factory output.

The S&P 500 dropped more than 2 percent. Stocks in Europe were also lower, and Asia had a downbeat day.

The retreat Wednesday came the day after the S&P 500 hit a one-month high. Though still far from the record reached on Feb. 19, stocks in the United States have been steadily climbing in recent weeks as investors have begun to focus on the prospect of an eventual rebound from the economic collapse set off by the pandemic.

But on Wednesday, they were confronted by a number of reports that highlight just how badly the economy is faring. The Commerce Department said that retail sales in March dropped 8.7 percent as consumers were forced to stay home, and the Federal Reserve said industrial production and manufacturing output in the United States fell by the most since 1946.

As they reported earnings, the nation’s banks also raised more warnings about the potential for a wave of defaults on loans, saying that they are stockpiling cash in anticipation of losses.

The collapse in American retail sales slammed the stocks of apparel retailers. Nordstrom, L Brands and Gap all fell sharply.

United Airlines warns its workers of a grim future.

The leaders of United Airlines issued a dire note to the carrier’s 100,000 employees on Wednesday, warning that staffing cuts may be coming and demand for air travel is likely to remain subdued into next year.

“The challenge that lies ahead for United is bigger than any we have faced in our proud 94-year history,” the airline’s chief executive, Oscar Munoz, and president, J. Scott Kirby, wrote in the letter, which was posted on the company’s website.

Traffic in the first two weeks of April was down 97 percent from last year and the airline now expects to fly fewer passengers in all of May than it flew in a single day during the same month last year, the executives wrote. And that decline is expected to last even as health concerns linger and travel restrictions are lifted at different times around the world.

The airline said earlier on Wednesday that it expected to receive $5 billion of federal funding intended to pay airline workers through September, but that stimulus is unlikely to prevent cuts beyond that, the executives warned on Thursday.

“The challenging economic outlook means we have some tough decisions ahead as we plan for our airline, and our overall workforce, to be smaller than it is today, starting as early as October 1,” they said.

The leaders struck a markedly different tone from the chief executive of American Airlines, Doug Parker, who said in a CNBC interview earlier in the day that he saw some “indications that the world is ready to start traveling again.”

California’s order on gig-worker benefits could set up a clash with Washington.

Gov. Gavin Newsom of California signed an executive order Wednesday directing the state’s unemployment agency to pay benefits to workers like drivers for Uber and Lyft through a federal assistance program for the self-employed.

The move appears at odds with the rules of the program, however, and could create a conflict between the state and federal governments.

A recently enacted California law effectively requires companies like Uber and Lyft to classify their workers as employees, qualifying them for traditional unemployment benefits. As a result, they appear ineligible for benefits under the federal program for the self-employed, known as Pandemic Unemployment Assistance.

A senior U.S. Labor Department official told reporters on Wednesday that recipients of the pandemic assistance have to be ineligible for traditional unemployment benefits.

The California labor secretary, Julie A. Su, said in an interview that she believed that the state’s move was legal because the federal government had “emphasized flexibility” in processing the emergency aid.

Uber and Lyft have long insisted that their drivers are contractors, not employees, and are challenging the California law in court. But they have urged their drivers nationwide to apply for the pandemic assistance.

Before the executive order, some Uber and Lyft drivers successfully claimed unemployment benefits in California. But the process could take months because the companies refused to submit income data needed to verify eligibility.

Amazon will suspend operations in France over a labor dispute.

Amazon said Wednesday that it would temporarily halt its operations in France after a court ruled the company had failed to adequately protect warehouse workers against the threat of the coronavirus and that it must restrict deliveries to only food, hygiene and medical products until it addressed the issue.

Amazon contested the findings of the ruling, handed down Tuesday by a civil court outside of Paris, and said it would appeal. The court had given the company a deadline of Wednesday evening to carry out the order or face a fine of 1 million euros (nearly $1.1 million) per day.

“We have suspended activities in our distribution centers in France, despite the huge investment we have made to ensure and strengthen safety measures for our employees,” Amazon said in a statement, adding that it was “perplexed” by the court’s decision. The threatened fine was too steep to risk not complying, Amazon added.

The company lashed out at unions that had brought the court case despite what it said was “concrete evidence” that it had worked to strengthen safety measures at its six mammoth warehouses around France. The ruling “is likely to have consequences for many people in our country,” including thousands of employees, Amazon customers and French businesses that make sales on Amazon’s platform, it added.

Laurent Degousée, a representative of SUD-Commerce, the main union that filed the lawsuit, said he had learned that Amazon was expected to halt its French operations as of Thursday for five days to enhance safety measures and provide its 10,000 workers full pay during that time. Amazon did not provide details on the furloughs, but said it was asking employees to stay home this week, and that it would assess the implications for its French operations.

Lockdowns have made it clear that personal technology needs are quite simple.

A computer, communications tools, entertainment and a good internet connection are all the technology that most of us need to work and stay sane while stuck inside our homes, says our Tech Fix columnist, Brian X. Chen.

That means we don’t have to spend a lot of money on the latest devices, although investing in a new router can significantly boost the speed of your internet connection.

This short list can guide our priorities in tech consumption even after we come out of this uncertain period. It also means that we don’t have to spend much money to maximize our happiness with tech.

Tech you don’t need: That smart speaker from Amazon or Google or that phone with the foldable screen. If it doesn’t help you do work, stay connected and feel entertained, you can find other ways to spend your money.

Companies painted a picture of major economic upheaval in the Federal Reserve’s April survey of businesses across the United States, which cited the term “coronavirus” dozens of times.

The Fed publishes this anecdotal survey eight times a year, in what’s called the Beige Book.

The latest reports speak to how the virus, and the mass quarantines in place to halt its spread, have disrupted every aspect of American economic life. Cotton producers may shift into wheat as shoppers demand bread and pasta but clothing retail slows, according to the report. Vehicle sales in the New York region “dropped to near zero,” and businesses “slashed” capital spending plans.

Few businesses seemed to forecast a rapid rebound: In the Fed’s Chicago district, companies “expected the recovery to still be underway a year from now,” and in the San Francisco region “many businesses expected heightened slack in the labor market going forward, eliminating any prior upward pressure on wage and price growth.”

The Philadelphia region summed it up like this: “Uncertainty clouds outlooks as firms wait for the Covid-19 threat to subside.”

Cargo flights are booming as the coronavirus forces people indoors and fuels online shopping. Even some ailing American air carriers are repurposing some of their passenger aircraft for cargo operations.

Cargo companies, which often fly around the clock, are also widening the network of airports where they operate — a process that began to accelerate in earnest about four years ago. Some of the new hubs are far from warehouses and closer to population centers.

Unlike people, “cargo doesn’t care where it connects or when it flies,” said Henry Harteveldt, the founder of Atmosphere Research Group, a travel industry advisory firm in San Francisco.

But the new flights can be a pain for local residents.

“It has a tremendous impact on peace and quiet,” said David Pearson, who lives in Idyllwild, Calif., and has been protesting new cargo flights at two nearby airports since 2018.

Mr. Pearson has been speaking with local officials, but he may not have much legal recourse: Even though a 1990 federal law allows airports to propose mandatory curfews to the Federal Aviation Administration, the agency hasn’t granted any since it took effect.

The law also did not anticipate an online world of overnight and same-day deliveries — or the din it would bring to neighborhoods.

The Federal Reserve is allowing banks to keep paying dividends.

In 2008, as the global financial system was melting down, America’s largest banks continued paying dividends to prove they were solvent. Many of those banks were in dire shape, however, and those payouts exacerbated shortfalls that would ultimately cause their demise.

Officials have loosened post-crisis rules put in place to ensure that banks had financial cushions large enough to continue lending, alongside other accommodations. They have relaxed borrowing caps, encouraged banks to dip into their extra layers of capital and liquidity, and are offering up cheap funding programs, all in an effort to encourage banks to keep making loans.

Banks are loath to cut their cash payments to shareholders, and the Fed chair, Jerome H. Powell, said last week that a curb on dividends was not appropriate at this point. But minutes of the Fed’s March 15 meeting indicate that several participants in the discussion disagreed with him and wanted to discourage the payments. 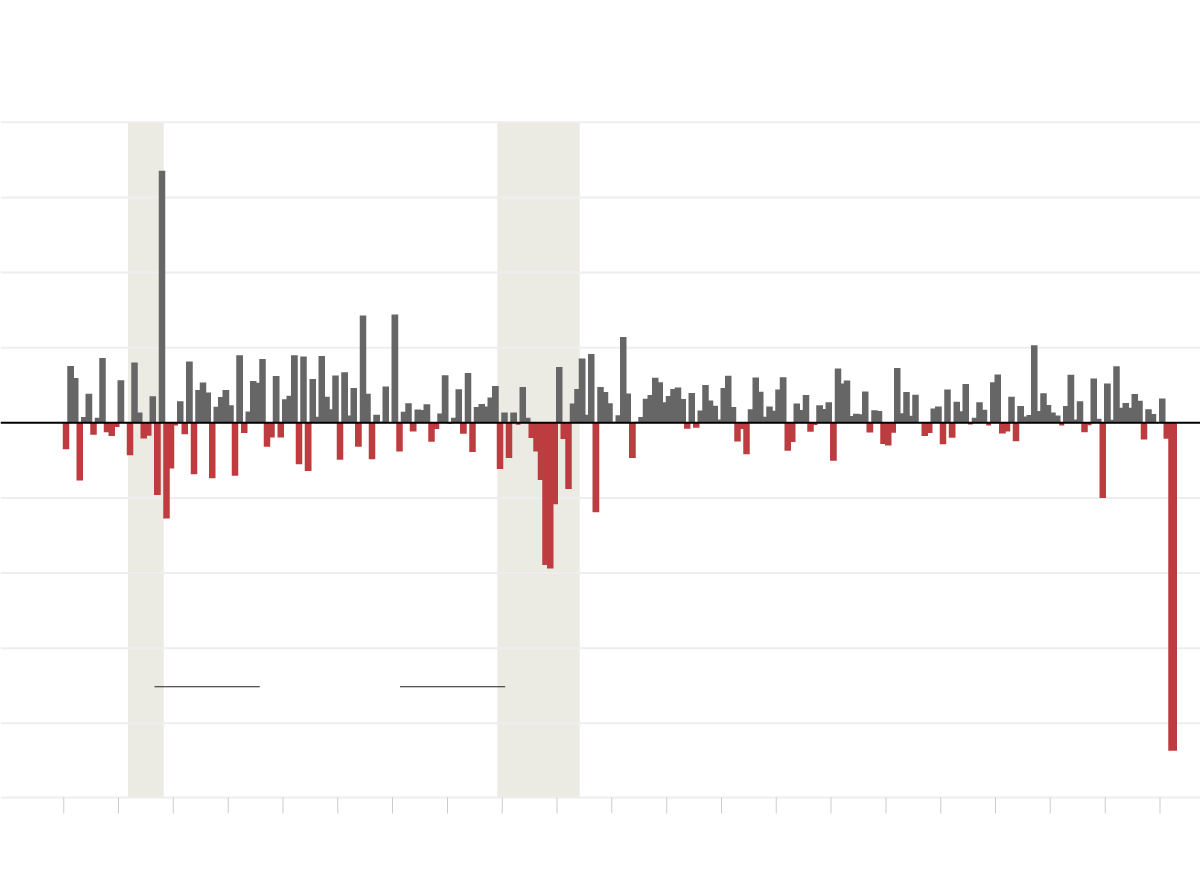 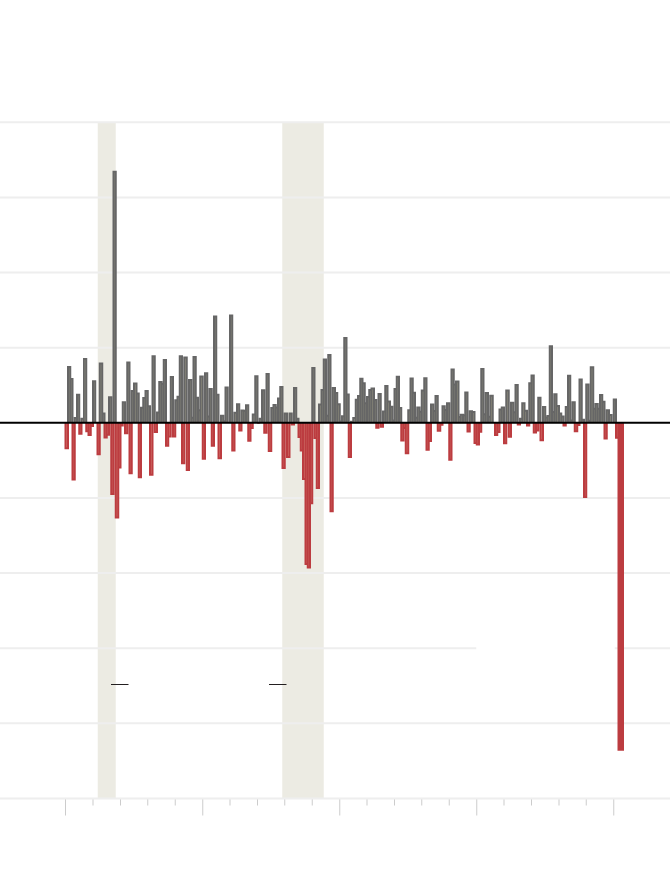 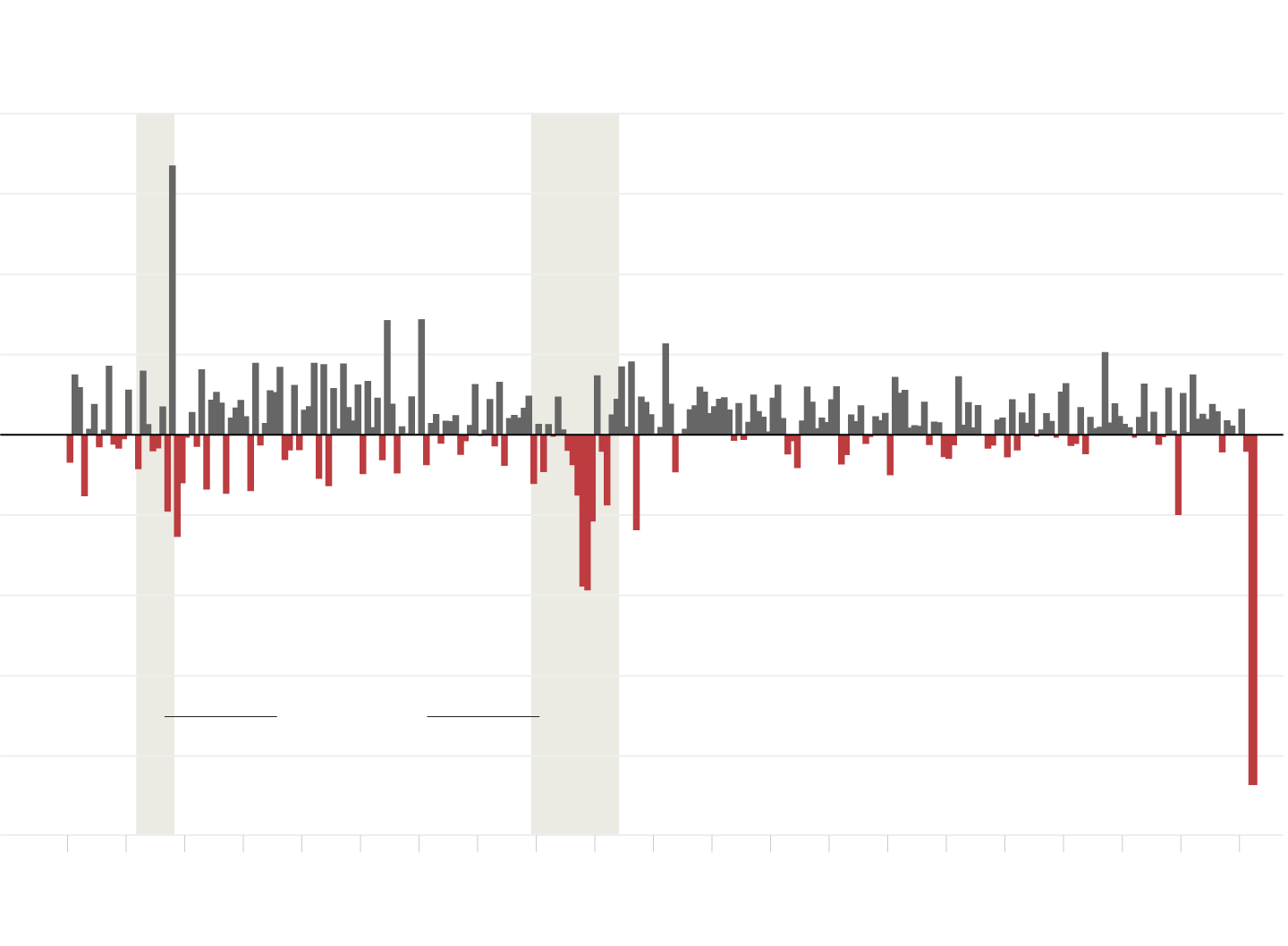 Grocery stores, pharmacies and other sellers of essential items experienced a surge of demand last month. But that was outweighed by a steep decline in other categories as businesses shuttered and shoppers restricted their spending.

The Commerce Department’s preliminary report showed a seasonally adjusted drop of 8.7 percent from February’s total sales, which include purchases in stores and online, auto and gasoline sales and money spent at bars and restaurants.

Even those bleak figures do not fully capture the economic deep freeze. Most states did not issue shutdown orders to nonessential businesses until late March or early April, meaning data for the current month could be worse still.

Until now, the largest one-month downturn in retail sales came in the fall of 2008, when the financial crisis led spending to fall nearly 4 percent for two straight months.

Catch up: Here’s what else is happening.