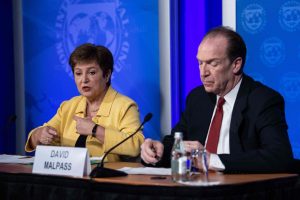 World Bank President David Malpass has joined IMF Managing Director Kristalina Georgieva in urging bilateral creditors to extend debt relief to poor countries struggling to cope with the corona virus. “Many countries will need debt relief. This is the only way they can concentrate any new resources on fighting the pandemic and its economic and social consequences,” said Mr Malpass during a meeting of the IMF’s International Monetary and Financial Committee. Mrs Georgieva warned that many low-income countries already suffer a high debt load and depend on official creditors for funds to fight the pandemic.

The World Bank is putting the finishing touches on an aid package worth some $160 billion in emergency funding over the next 15 months. In a statement issued after a virtual meeting of G20 leader in late March, Mr Malpass explained that the World Bank seeks to shorten the time to recovery and “create conditions for growth, support small- and medium-sized enterprises, and help protect the poor and vulnerable.” He also emphasised that the bank works tirelessly to strengthen the ability of developing nations to respond to the pandemic.

According to Mr Malpass, the World Bank now has pandemic-related projects underway in 56 countries. Additionally, the bank is restructuring existing projects in 24 countries to free up funds for public healthcare. Mr Malpass said that he is particularly concerned about ‘poor and densely populated’ countries such as India that need massive investments to scale up healthcare and related sectors.

The bank’s teams are currently finalising some $2.8 billion in emergency disbursements under the $14 billion Fast Track Facility which includes a mix of grants, credits, and loans. A new framework has also been proposed to streamline and expedite the processing of requests and tailor operations to the specific epidemic status of each country.

The International Finance Corporation (IFC), the private sector arm of the World Bank Group, has freed up an initial tranche of $8 billion to help companies preserve jobs and weather the economic downturn. The corporation has mobilised its resources to offer immediate support to about 300 businesses across emerging markets that had already been approved for financing. The IFC has also provided $545 million in facilities through its Global Trade Finance Program. The bulk of this credit went to low-income and fragile countries in Sub-Saharan Africa and the MENA region.

In order to draw in private investors, the IFC has boosted the resources available to the Multilateral Investment Guarantee Agency (MIGA), also part of the World Bank Group, by $6 billion. MIGA provides political risk insurance to private sector lenders and investors.

Though the World Bank’s $160 billion package seems modest when compared to the trillions of dollars and euros being hastily disbursed in the United States and throughout Europe, the bank usually manages to leverage its operations by engaging with private creditors. Once the World Bank has given a project its stamp of approval, private sources of funding often open up and follow through.

World Bank President Malpass has taken the lead in promoting the coordination of relief efforts by multilateral lenders. He has hosted a number of conference calls with the heads of regional development banks such as the European Investment Bank, Inter-American Development Bank, and others to seek co-financing for current and future World Bank operations. Mr Malpass also reiterated the importance of cementing common procurement and logistics programmes and involving the private sector in all initiatives. Mr Malpass said that he received a ‘very positive’ response from multilateral lenders to work on a comprehensive debt relief initiative for low-income countries.