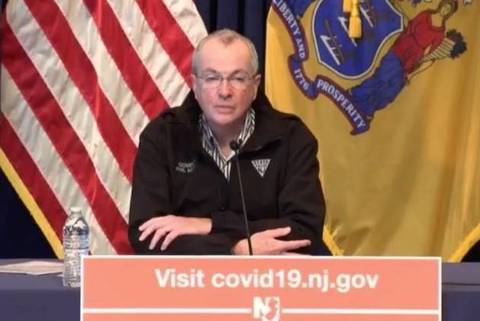 TRENTON, NJ — The commissioner of the New Jersey Department of Labor and Workforce Development offered what he could in the way of reassurance during the state’s daily press briefing on Saturday, addressing the staggering 362,000 people who have applied for unemployment as a result of the nation’s public health crisis.

New Jersey now has 34,124 known cases of the coronavirus and 846 deaths, officials announced Saturday. Two-hundred of those deaths were recorded between April 3 and April 4.

Within the first week of Gov. Phil Murphy’s enactment of the stay-at-home order and shut-down of nonessential businesses, the Department of Labor and Workforce Development experienced a 1,600% increase in volume in unemployment applications, causing the state’s outmoded systems to crash.

Since that time, layoffs and furloughs have continued to send New Jerseyans to the virtual unemployment line, with many growing impatient as the government struggles to address the hundreds of thousands of claims coming in.

“There’s nothing I want more than to put your hard-earned benefits into your family budget sooner,” said labor commissioner Robert Asaro-Angelo. “We’ve made no secret about the inflexibility of our legacy technology and our desperate desire to receive and act on more of your phone calls. We hear your frustration and we are with you.”

Asaro-Angelo went on to lay out what his department has done to upgrade its systems while working the kinks out of the existing claims. In addition to increasing capacity to ensure more calls and applications get through at one time, the Division of Unemployment Insurance is pinpointing places where claims are getting stuck and using its resources to reroute those claims to pay them as soon as possible

He said that the department is also adding phone lines and cross-training employees from other divisions to help field calls and supplying employees with laptops to allow them to work remotely.

The number of claims moving through the system without issue at the present time is at 50 percent, the same rate as before the onset of the pandemic, according to Asaro-Angelo. In other words, half of the residents who file for unemployment will begin receiving their benefits with two to three weeks.

Filers who are temporarily furloughed or independent contractors may not have their claims processed immediately, Asaro-Angelo said. The commissioner, acknowledging a likely delay in processing the backdate on claims, recommended applying during off-hours, or first thing in the morning or later in the evening.

“Imagine a stadium with 10,000 seats, but there are a million people waiting to get in. There are only so many who can get through the gates at one time,” he said.

Asaro-Angelo said he is waiting to hear from the U.S. Department of Labor on how to administer the 13-week extension of unemployment benefits known as Pandemic Emergency Unemployment Compensation, under which eligible individuals receive an additional $600 in benefits.

SURGE HITS HOSPITALS AHEAD OF SCHEDULE

Pleading with anyone in the state with medical training, Department of Health Commissioner Judith Persichilli gave a grim report of what she and her team believe is the first part of the surge arriving sooner than anticipated.

The Department of Health sent out a crisis alert for volunteers Saturday, urging people to sign up at https://nj.gov/state/volunteer-in-nj.shtml.

More than 4,000 patients positive for coronavirus were hospitalized as of Friday night, and 2,000 more were awaiting test results. Nearly 1,500 people are in critical care and more than 85% are on ventilators, Perisichilli said.