Record 3.3m Americans file for unemployment as the US tries to contain Covid-19  The Guardian 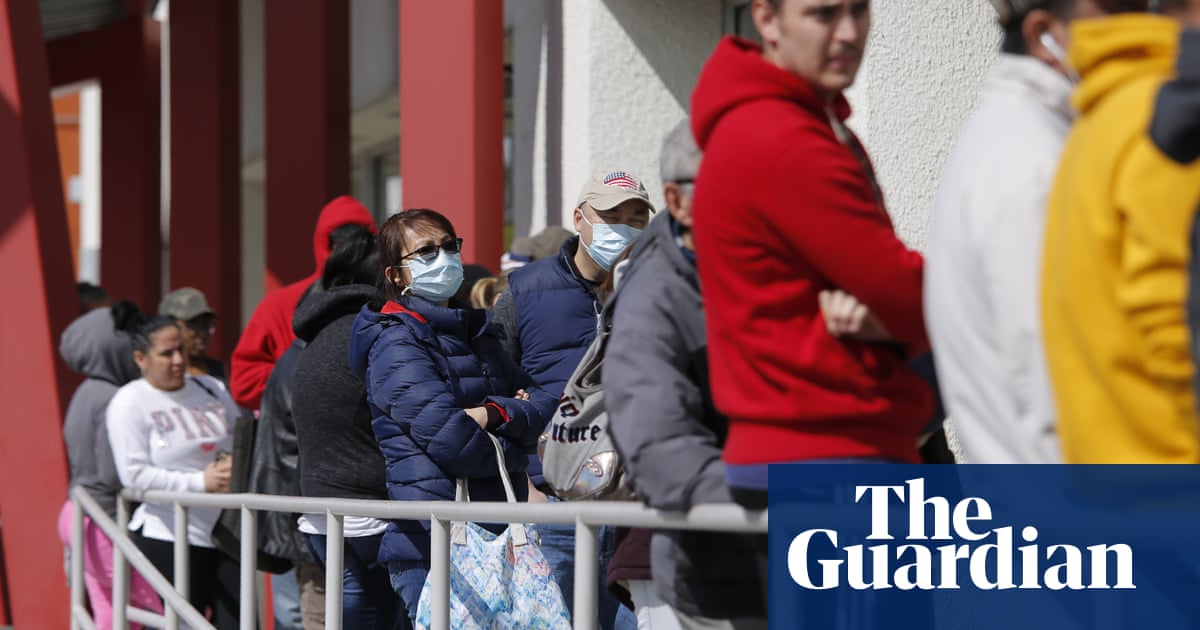 A record 3.3 million people filed claims for unemployment in the US last week as the Covid-19 pandemic shut down large parts of America’s economy and the full scale of the impact of the crisis began to emerge.

Experts warned of a “catastrophic unemployment crisis” after the labor department announced jobless claims filed by individuals seeking unemployment benefits rose by more than 3 million to 3.28 million from 281,000 the previous week. The figure is the highest ever reported, beating the previous record of 695,000 claims filed the week ending 2 October 1982.

The release offers the first official glimpse of the severe economic downturn that the US faces as companies shutter businesses and states across the country move to prevent people from gathering in crowds in an attempt to contain the virus.

US Treasury secretary Steve Mnuchin has predicted unemployment in the US – close to record lows only last month – could reach 20%. The Trump administration is pushing through a $2tn stimulus package that includes payments to taxpayers as well as bailouts for hard-hit industries to mitigate Covid-19’s impact. But the money will not head off a huge surge in unemployment.

“This morning’s jobless claims confirm that the United States is in the thralls of a catastrophic unemployment crisis, the likes of which we haven’t seen since the Great Depression,” said Andrew Stettner, senior fellow at the Century Foundation thinktank. “This represents the single worst one-day piece of labor market news in America’s history.”

Across the US, laid-off workers have overwhelmed state labor departments with claims for unemployment benefits. In New York City, which now accounts for roughly 5% of global Covid-19 cases, there has been a 1,000% increase in claims.

Taylor Cox, a 29-year-old bartender from Indianapolis, was laid off 12 days ago. “People are scared, people don’t know what’s going to happen. The idea of a tipped worker going without tips for eight weeks or more is one of the most frightening things to have to confront,” told the Guardian.

Ahead of the labor department release, the Trump administration pushed to block states from releasing daily figures on the soaring unemployment crisis.

Ohio and South Carolina stopped releasing daily figures after receiving a memo from the department of labor that read: “The data from these reports is monitored closely by policy makers and financial markets to determine appropriate actions in light of fast-changing economic conditions. As such, the data must remain embargoed until the national claims report is released the following Thursday at 8.30am.”

What US unemployment benefits can I get during the coronavirus? Your payment options explained

According to Johns Hopkins University there are now 55,233 confirmed cases of Covid-19 in the US and 802 reported deaths, up from 302 last weekend. Despite the rising casualties, president Donald Trump said this week that he would like the country “opened up and just raring to go by Easter”.

Trump is concerned the quarantine measures could prove more harmful than the virus, an opinion that is disputed by economists and health experts. On Wednesday he tweeted: “The real people want to get back to work ASAP. We will be stronger than ever before!”

Last week’s sharp rise in unemployment marks the end of an historic period of US jobs growth. US employers have added jobs every month for 101 consecutive months and in March the unemployment rate was 3.5%, a 50-year low.

Economists said it was still too early to gauge the depth and length of the pandemic’s impact on the jobs market. The Federal Reserve Bank of St Louis president, James Bullard, has said he expects unemployment to hit 30% in the second quarter, while Morgan Stanley has estimated that unemployment would average 12.8% over that time period.

“There is going to be a lot of hardship for a lot of people,” said Gus Faucher, chief economist of the PNC Financial Services Group. But he expects to see a “solid rebound” by the summer if the virus is contained by then.