Update: In the days following publication of this article, Wells Fargo also committed to ruling out funding oil and gas drilling in the Arctic region, including the Arctic National Wildlife Refuge. Read more about it here.

In a major win for environmental organizations and Indigenous groups, JPMorgan Chase on Tuesday announced that it will not finance oil and gas extraction in the Arctic region, including in the Arctic National Wildlife Refuge, nor will it continue financing many coal-related enterprises, including thermal coal mines and coal-fired power plants across the world. The announcement comes after a years-long pressure campaign by environmentalists and Indigenous peoples, who together have called on the giant bank—which is by far the leading US investor in fossil fuels—to move away from projects that threaten the climate.

JPMorgan Chase executives made the announcement at the bank’s annual Investor Day, during which they promised to stop investing in and providing services to companies that derive “the majority of their revenues from the extraction of coal” by 2024, as well as to not provide financing to offshore and onshore oil and gas extraction in the Arctic. JPMorgan Chase CFO Jennifer Piepszak also announced that the bank is committing $200 billion in financing across three focus areas: supporting climate action, clean water, and waste management; increasing access to housing, education, and health care; and advancing infrastructure, innovation, and growth.

Environmental activists and Indigenous leaders who have been staging protests against Chase applauded the announcement, which comes just two months after another leading US bank—Goldman Sachs—made a similar commitment not to finance oil drilling in the Arctic.

Send a message to the CEOs of the other major US banks, telling them that bankrolling Arctic drilling is a threat to Indigenous human rights and to the climate.

“It was emotional when Goldman Sachs, and now JPMorgan Chase, made their announcement,” Bernadette Demientieff, executive director of the Gwich’in Steering Committee, told Sierra. “I’m really grateful that somebody who made that decision listened, and thank Goldman Sachs and JPMorgan Chase for listening to the people and the Indigenous voices of the area. We just hope that more follow suit and more banks and oil and gas companies understand that Indigenous peoples in this country are not just going to allow you to come into our homeland and do whatever you want.”

“That the country’s largest bank, and the world’s largest banker of fossil fuels, is walking away from funding Arctic drilling should send a powerful message to the rest of the financial sector and to oil companies that drilling in the Arctic Refuge is a toxic investment,” said Ben Cushing, a campaign representative of the Sierra Club’s Beyond Dirty Fuels campaign. “Any company or bank that’s associated with the destruction of this unique landscape is going to face a major public backlash and reputational damage.” 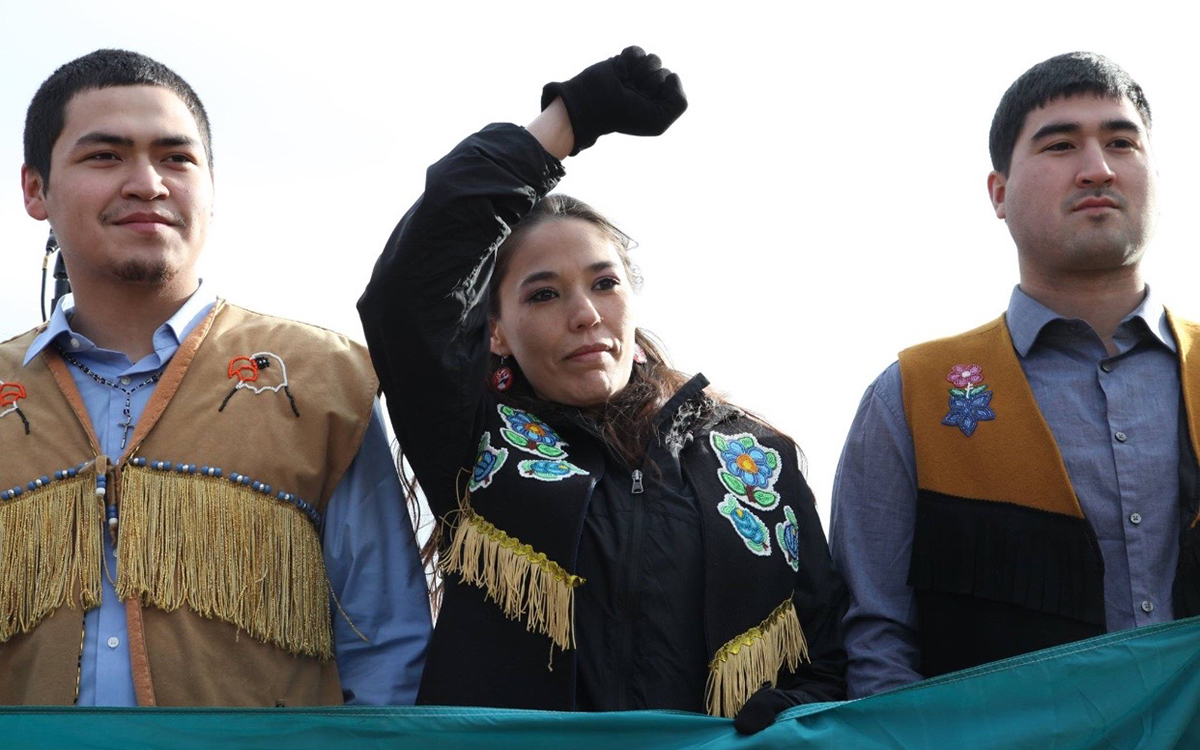 For decades, the Gwich’in and their environmental allies have fought to keep oil and gas drilling out of the coastal plain of the Arctic National Wildlife Refuge, which fossil fuel companies have coveted as a potential source of significant fossil fuel deposits. The coastal plain of the refuge is the calving grounds of the Porcupine caribou herd, which the Gwich’in rely on not only as a food source but as also an integral part of their identity. Gwich’in communities are already feeling the impacts of climate change as the historical route of the caribou shifts farther away from some of their communities. The Gwich’in call the coastal plain Iizhik Gwats’an Gwandaii Goodlit—the “Sacred Place Where Life Begins.”

The threat to the ecological integrity of the refuge became more acute in December 2017, after Alaska senator Lisa Murkowski, a Republican, was able to sneak a provision into President Trump’s tax-cuts legislation that opened up the area for oil and gas extraction. Demientieff said that she and other members of the Gwich’in Nation had traveled to Washington, DC, repeatedly to appeal to legislators not to allow drilling on their ancestral lands—but their message was not taken into account.

“When I was sitting there watching the process, we were sitting there sharing from our hearts to these people,” she said. But while most of the Democrats were present during hearings about drilling in the refuge, she recalls, no Republicans were there except for Senator Murkowski. “Only when it was time to vote did they come piling in to vote on something they didn’t even listen to. It was insulting; not just to me, but to my people, and to my ancestors. These people do not care about our human rights, our food security, nor our homeland. Our future generations are going to be living with the destruction of the decisions they make.”

As it became apparent that the Trump administration was willing to fast track oil and gas exploration in the refuge regardless of the risk to the environment and Indigenous sovereignty, a coalition of groups led by the Gwich’in Steering Committee, Rainforest Action Network, the Sierra Club, and 350.org has focused its energies on the financial sector. During the last year, activists have staged protests and sit-ins at JPMorgan Chase retail banks, as well as other lending institutions, to call for a halt to fossil fuel project financing. The grassroots campaign has had success in pressuring lenders to retreat from fossil fuel projects. In addition to Goldman Sachs and now JPMorgan Chase, the world’s largest money manager, BlackRock, has said it will exit from investments that have “high sustainability” risks. Meanwhile, Trump’s Department of the Interior still has not been able to hold an auction for exploration leases in the refuge.

While applauding Chase’s Tuesday announcement, environmentalists were also careful to note that the new policy falls short of the climate movement’s broader demands for a complete halt to new fossil fuel investing. A detailed analysis by the Sierra Club and Rainforest Action Network concludes that while the new Chase policy has many strengths, it is also riddled with weaknesses. For example, Chase’s policy only covers “greenfield” projects in the Arctic, meaning the bank is willing to consider financing expansion of existing oil and gas fields in the polar region. Chase will also continue to finance projects in the Canadian tar sands as well as gas fracking and the build out of liquified natural gas facilities.

“A new policy that is on par with Goldman Sachs’s and notably weaker than BlackRock’s does not demonstrate true climate leadership,” Jason Opeña Disterhoft, climate and energy senior campaigner at Rainforest Action Network, said in a statement. “The bank must stop financing expansion of fossil fuels, with tar sands oil extraction and pipelines being a clear litmus test. Seventeen global banks already restrict tar sands financing, yet in the three years after the Paris Agreement was adopted, JPMorgan Chase provided more finance to the sector than its five major US peers combined.”

JPMorgan Chase’s Tuesday announcement is just the latest evidence that the global financial sector is worried about climate change’s impact on the global economy and increasingly hesitant to back continued fossil fuel extraction. The company’s announcement comes days after Rupert Read of Extinction Rebellion leaked to The Guardian a report from two JPMorgan economists that implies that the bank’s own investments, if continued, would end in climate catastrophe.

The 22-page report acknowledges that atmospheric CO2 levels are increasing at faster rates than ever before, that this is affecting the climate, and that humans are to blame. The JPMorgan economists declare that “the earth is on an unsustainable trajectory. Something will have to change at some point if the human race is going to survive.” In the report, JPMorgan economists Jessica Murray and David Mackie offer a string of observations that might seem obvious to climate activists, but that sound radical coming from insider economists. For example, the report states that “if no steps are taken to change the path of emissions, the global temperature will rise, rainfall patterns will change creating both droughts and floods, wildfires will become more frequent and more intense, sea levels will rise, heat-related morbidity and mortality will increase, oceans will become more acidic, and storms and cyclones will become more frequent and more intense. And as these changes occur, life will become more difficult for humans and other species on the planet.” The economists also note climate change’s severe impact on health, citing what they call “conservative estimates” that between “2030 and 2050, climate change will cause around 250,000 additional deaths per year,” with unequal burdens felt by the most vulnerable including children, the elderly, and those in developing countries.

The report also acknowledges that “nature is the lifeblood of the planet and critical for human existence, providing food, energy, and medicine and also playing a fundamental role in communities and cultures. Human activity has an outsized influence on the natural environment and scientists have documented significant declines and degradations to ecosystems and biodiversity.” The authors note that “the state of nature is deteriorating at a rate unprecedented in human history.”

It remains unclear how long it will take for the global financial sector to follow the natural logic of such dire warnings and to promise a total halt to all fossil fuel investments. In the meantime, advocates say they will continue to do whatever they can to push for more ambitious climate promises from the world’s leading financiers.

“The Gwich’in Nation will never give up—we don’t have that option,” Demientieff said. “And for the movement, we have a lot more work to do. We’re going to continue to target the banks, to use our voices, and to hold those accountable that think they can do whatever they want.”