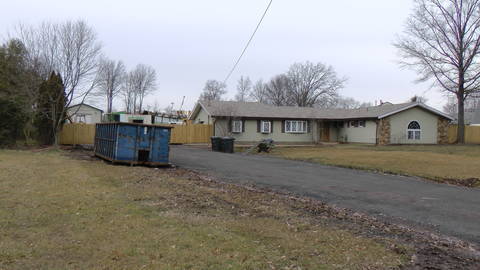 PISCATAWAY, NJ – A 60-year-old township resident who, after being released from prison moved into his daughter’s Sarah Lawrence College dorm room in New York was arraigned in Manhattan federal court on Wednesday on sex trafficking, extortion, forced labor, conspiracy, money laundering and other charges, said Department of Justice officials.

FBI. agents arrested Lawrence Ray, a.k.a. “Lawrence Grecco” after raiding his Holly Lane home in Piscataway Tuesday on charges of manipulating and abusing students over a 10-year period at the Westchester County, NY college, beginning in 2010, said officials.

According to the indictment: “Ray used physical and psychological threats and coercion to indoctrinate and exploit a group of college students in Westchester County as well as other victims. Ray extorted approximately $1 million from at least five victims; forced certain victims to perform unpaid labor; and caused, through force, fraud, and coercion, at least one victim to engage in commercial sex acts.  He laundered the proceeds of his crimes through an internet domain business.  Ray committed these offenses in locations including Westchester County, New York, and New York, New York, as well as Pinehurst, North Carolina.”

You have successfully signed up for the TAPinto Somerville Newsletter.

No one at the Piscataway residence,which appeared to be undergoing multiple construction projects would speak to reporters.

“As alleged, for nearly a decade, Lawrence Ray exploited and abused young women and men emotionally, physically, and sexually for his own financial gain,” said Manhattan U.S. Attorney Geoffrey Berman.  “Through his manipulative interrogation sessions, Ray made his victims confess to alleged wrongdoing and then compelled them to repay alleged damages owed to him, through payments of hundreds of thousands of dollars, or worse, forced labor and sex trafficking.”

The indictment provides more details on the allegations:

“From in or about 2010 through the present, Lawrence Ray, a.k.a. “Lawrence Grecco,” the defendant, subjected a group of college students and other victims to sexual and psychological manipulation and physical abuse.  Ray’s tactics included sleep deprivation, psychological and sexual humiliation, verbal abuse, threats of physical violence, physical violence, threats of criminal legal action, alienating the victims from their families, and exploiting the victims’ mental health vulnerabilities.

Through this manipulation and abuse, Ray extracted false confessions from the victims to causing purported damages to Ray and his family and associates, and then extorted payment for those purported damages through several means.  The victims made payments to Ray by draining their parents’ savings, opening credit lines, soliciting contributions from acquaintances, selling real estate ownership, and at Ray’s direction, performing unpaid labor for Ray and earning money through prostitution.

As alleged, through fear, violence, and coercion, Ray forced one female victim to engage in commercial sex acts to pay damages to Ray that she did not actually owe.  Beginning when she was just a college student, Ray sexually groomed this victim, and collected sexually explicit photographs and other personal information which he then used to coerce her into continued commercial sex acts.  Ray also used physical violence.  On one occasion, as alleged, Ray tied his victim to a chair, placed a plastic bag over her head, and nearly suffocated her.  In total, Ray collected over $500,000 in forced prostitution proceeds from this victim.

In addition, as alleged, Ray forced three female victims to perform unpaid labor on a family member’s property in North Carolina.  Through a course of psychological and physical abuse, Ray forced these three victims to do extensive physical labor, sometimes in the middle of the night, for no pay.

Associates of Ray helped Ray collect and transfer the criminal proceeds, which Ray shared with at least two associates.  Ray then laundered his criminal proceeds through an internet domain business.”

A Department of Justice news release lists the prison time Ray is facing if convicted on the charges:

“College is supposed to be a time of self-discovery and new-found independence,” said Berman. “But as alleged, Lawrence Ray exploited that vulnerable time in his victims’ lives through a course of conduct that shocks the conscience.”