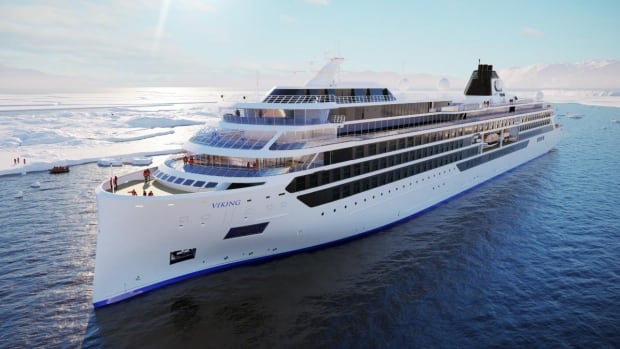 Cruise ships with the popular Viking Cruises line are scheduled to dock in Windsor and other Great Lakes ports in 2022.

Good news for tourism, but not some say for the environment.

Daniel Rieger — head of transport policy with the Nature and Biodiversity Conservation Union (NABU) a non-governmental organization based in Germany — said the two 200-metre-long expedition ships that will soon travel through the Great Lakes region are causes for environmental concern.

Rieger said it’s because of the tonnes of harmful exhaust gas emitted by cruise line and shipping vessels.

“The reason for it is that cruise ships usually run on heavy fuel oil,” he said. “The fuel they run on is 100 times dirtier compared to the diesel we use for cars and trucks.”

According to Rieger, some of the cruise ships that travel through European ports — ships that can accommodate around 4,000 passengers — are capable of emitting as much carbon dioxide as 85,000 cars.

However, the vessels set to sail the Great lakes will be much smaller in comparison, carrying about 385 passengers each. For Windsor’s Port Authority president and CEO, Steve Salmons, that makes all the difference.

Salmons said he’s very excited to hear of the Viking vessels making their way through Windsor, adding the environmental impact would be low.

“It’s not as if they cruise down the river and dump off their waste — they don’t, — those are held and shipped out and treated at various ports as well.” said Salmons, adding that vessels are “heavily regulated” on the lakes.

“These ships are particularly modern and they burn very clean fuel,” said Salmons. “The environmental impact is minimal from carbon emissions.”

In addition to environmental concerns, Rieger said the tourism benefits often touted by companies like Viking Cruises don’t add up either.

“It’s usually all-inclusive vacations, so they have paid already,” he said. “They don’t need accommodation, they don’t need lunch of breakfast whatsoever, and therefore they spend really little money in the region.”

Even when factoring the revenue generated from contractors and subcontractors responsible for maintaining upkeep, Rieger said the evidence shows that “contracts are not designed for bringing wealth to anybody else than that the cruise industry.”

News that Viking, a large European cruise line, is expanding to the Great Lakes in 2022 is exciting some in Windsor’s tourism industry. But what’s the environmental cost of these giant vessels? We asked Daniel Rieger, head of transport policy for NABU, a German environmental association that releases an annual report on cruise ship pollution. 7:36

But Salmons doesn’t believe that will be the case. He said the Viking ships will be an addition to some of the smaller cruise vessels already operating successfully along the lakes.

“The ships when they come in … provide  lot of opportunity for local businesses in terms of dealing with food and waste and supplies for the ship,” he said. “So I think there’s a lot of good economic opportunity here.”

In an email, a spokesperson for Transport Canada clarified that any cruise ship entering Canadian ports or travelling through Canadian waters are subject to dangerous chemical rules under the Canada Shipping Act.

Liu added that other federal departments, as well as port authorities, provincial and municipal governments have even more rules governing marine pollution.

… A vessel operator may be fined up to $1 million or face a jail sentence up to 18 months, or both, depending on the violation.– Sau Sau Liu, Transport Canada spokesperson

“This is an International Maritime Organization designated area off North American coasts in which stringent international emission standards apply to ships,” she wrote. “Vessels operating in Canadian waters in this area can only burn fuel with a maximum sulphur content of up to 0.10 per cent. In order to meet this requirement, vessels can use exhaust gas cleaning systems, including open-loop scrubbers.”

“Many of these inspections include verification of sulphur content,” she wrote. “In instances of non-compliance under the Canadian Vessel Pollution and Dangerous Chemicals Regulations, a vessel operator may be fined up to $1 million or face a jail sentence up to 18 months, or both, depending on the violation.”

Liu said the Vessel Pollution and Dangerous Chemicals Regulations apply in all Canadian waters south of the 60-degree North latitude and “require passenger vessels built after 2013 and carrying more than 500 passengers to ensure that greywater is not released without first having passed through a marine sanitation device OR the vessel must be more than three nautical miles from shore at the time of release.”