JPMorgan Chase has made some environmentally and socially conscious statements with its money in recent years.

It pledged $200 billion to wind farms and other sources of renewable energy, for instance, and has promised to end its financing of private prisons.

But that wasn’t good enough for Boston Common Asset Management, an investment firm focused on environmental issues. Because the bank remains the world’s top financier of fossil fuels, Boston Common entirely divested its JPMorgan shares — it would not say how many — in favor of other banks that it felt are making greater progress on the issue. 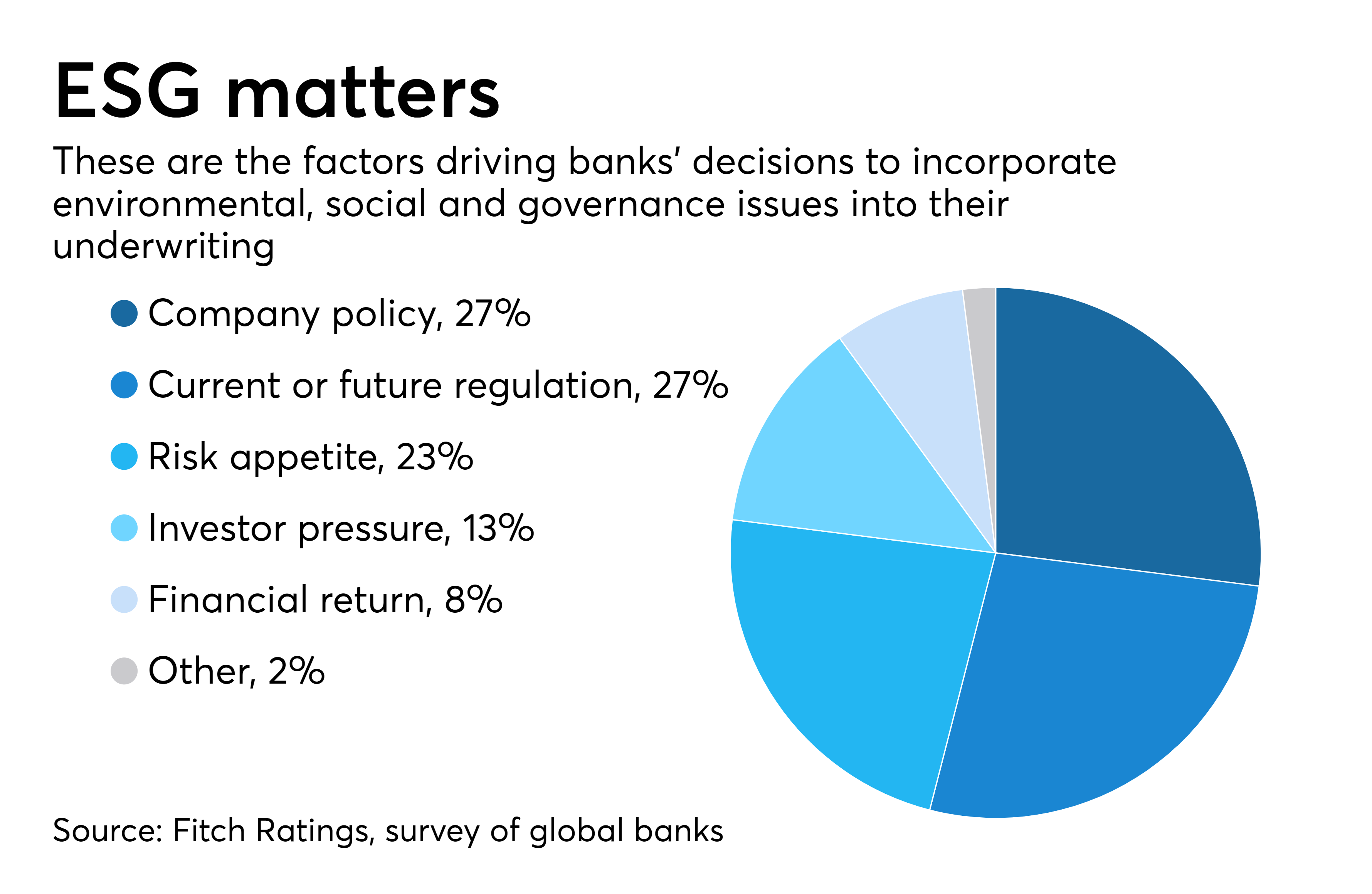 “The positive doesn’t negate the risk,” said Lauren Compere, managing director of the asset management firm. “As an active manager, we have so many choices. We want to invest in players where we’re seeing traction and progress and who are really willing to make changes.”

The move is an example of how environmental, social and governance — or ESG — factors are growing more important to the banking industry, and pressure by investor groups is a major reason why. Rising public awareness of banks’ stances on environmental and social issues, and even anticipation of future regulation, are also influencing banks to be more conscious about ESG factors.

In response to industry interest, last year the American Bankers Association set up a new working group aimed at addressing the many issues and questions that might arise under the big tent of ESG. Though more and more investors are asking banks to report their own ESG factors, the association says there is little established guidance for doing so.

“The industry, in one way or another, has been focused on many of these issues for a long time,” said Joseph Pigg, senior vice president of fair and responsible banking and mortgage finance. “But clearly there’s a lot more activity lately that’s identifiable as ESG.”

A recent report by the ratings agency Fitch found that more banks worldwide are screening for environmental and social risks when making credit decisions. According to the report, those ESG screening criteria rarely led to outright deal rejection, but rather to increased due diligence, especially in industries like mining and chemicals.

Among 182 banking groups surveyed globally, those in Africa, Latin America and Western Europe were more likely to screen for ESG factors, while those in North America and Eastern Europe lagged the pack.

According to Fitch, company policy and current or future regulation were the top two factors behind increased ESG screening, followed by credit or risk appetite and pressure from stakeholders or investors.

Pigg noted some differences in the motives between U.S. banks and their peers in other countries.

“In the U.S., most of the focus on ESG is being driven by the market. It’s not necessarily government regulation,” he said.

Investor groups are increasingly focused on ESG. For example, the asset manager BlackRock recently joined the Climate Action 100+, a group of investors pressuring the world’s biggest greenhouse gas emitters to better detail how climate change will affect their businesses.

ShareAction, a nonprofit in London that focuses on responsible investing, is coordinating shareholders to pressure Barclays to phase out its financing of fossil fuel industries.

Citi, for example, is a founding partner of the United Nations’ Principles for Responsible Banking. It also has a new sustainability chief, and it tightened lending to gun manufacturers after the 2018 shooting in Parkland, Fla., that left 17 dead.

Rising public awareness is also playing a role in banks’ consideration of ESG. For example, campus protest movements are motivating many colleges and universities to re-examine where they do their banking, said Georges Dyer, co-founder and executive director of the Intentional Endowments Network.

Founded a little over five years ago, the organization provides resources to colleges and universities seeking to align their missions with their operations, including their investments and operating accounts.

“A couple universities are really anchor institutions in their communities,” Dyer said. “As they look at how their investments play into their role in the community, banks are increasingly an area of focus. We’re starting to see more of those types of conversations happen as schools think about their local impact.”

The ABA’s ESG working group meets once a month on a conference call and might include anywhere from several dozen to several hundred bankers, the trade group said. Discussions so far have included state and federal legislative proposals, the social aspects of ESG, and some of the basics. For those bankers newer to the group, the ABA has offered a primer on how to think about ESG and get started.

The bankers who participate on those calls sometimes hold specialized ESG and sustainability roles, but just as often they work in business lines or more general leadership roles. Likewise, the banks include the smallest community banks, the largest money-center banks and everything in between, Pigg said.