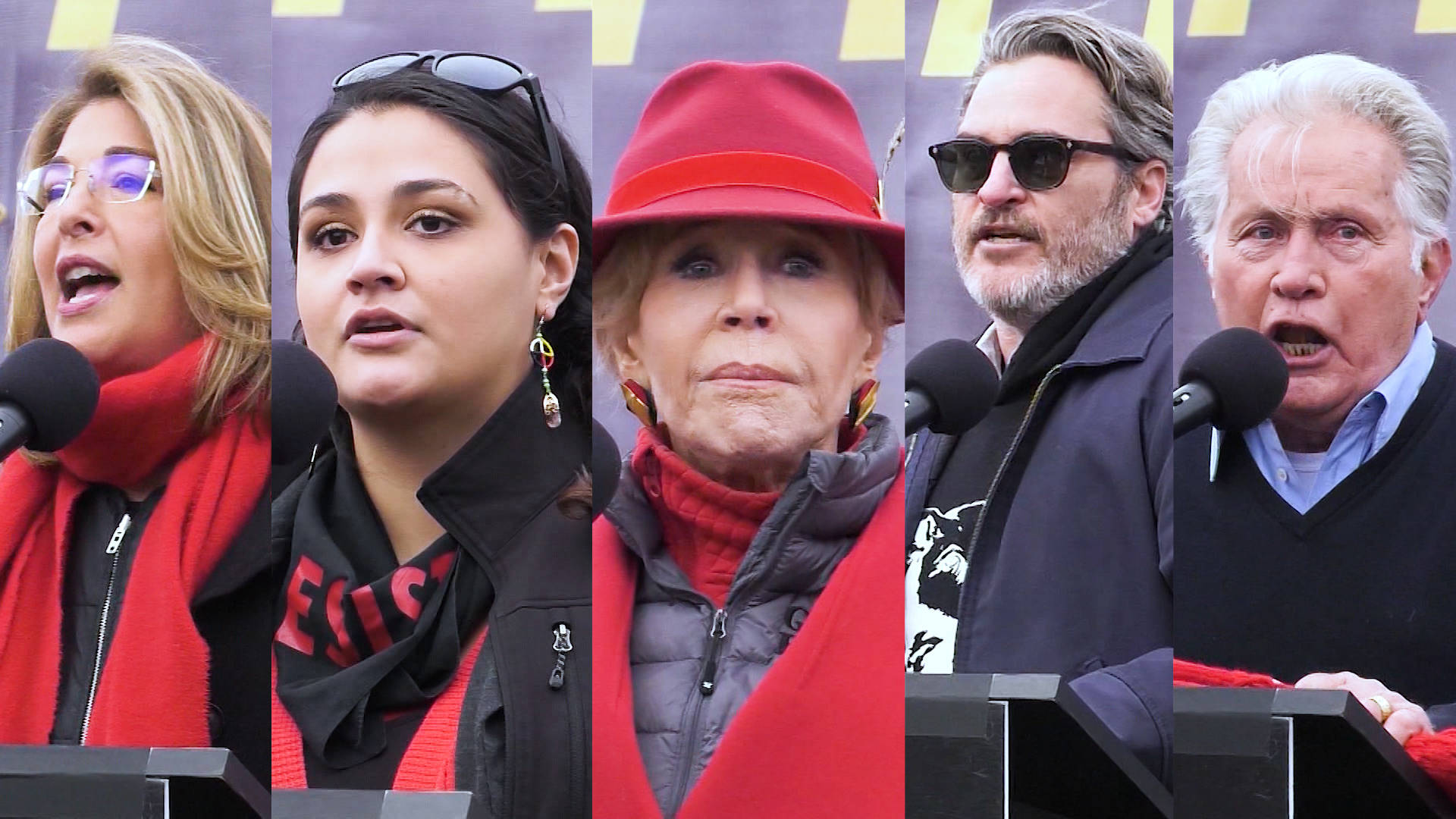 This is a rush transcript. Copy may not be in its final form.

AMY GOODMAN: I’m Amy Goodman. This is Democracy Now! Nearly 150 people were arrested on Capitol Hill Friday in climate protests led by Academy Award-winning actor and activist Jane Fonda. Fonda has been leading weekly climate demonstrations in D.C., known as “Fire Drill Fridays,” since October. For Fonda’s last and 14th protest, actors Martin Sheen and Joaquin Phoenix, who was just today nominated for an Oscar, Ojibwe activist Tara Houska, journalist Naomi Klein and dozens more lined up to get arrested as they demanded a mass uprising and swift political action to thwart the climate crisis. Jane Fonda then marched with supporters to a Chase Bank branch, where environmentalist Bill McKibben and more than 20 others were occupying the space to draw attention to the bank’s ties to the fossil fuel industry. Ten, including McKibben, were arrested. The day of action was the launch of the “Stop the Money Pipeline” campaign to halt the flow of cash from banks, investment firms and insurance companies to the fossil fuel industry. The day of protests began with Jane Fonda outside the Capitol.

JANE FONDA: OK, so what’s in store for the climate movement in 2020? As you all know, we cannot burn all of the coal, the gas, the oil that’s in the ground. We cannot burn it all and stay within the parameters of what science tells us we must do. We have to cut our fossil fuel emissions by 50% in 10 years. That is a massive undertaking. And we can’t do it if the fossil fuel industry keeps expanding.

So, why are fossil fuel companies continuing to expand? Why are they still drilling and fracking and mining? And why are the big Wall Street banks and other international financial institutions still helping them drill and frack and mine and process and export? It’s called suicide investing. It’s insane!

And one of the worst offenders is JPMorgan Chase. It’s one of the largest sources of capital to the fossil fuel industry in their quest to drill and frack and mine. And we cannot let Chase and other financial institutions continue this way. …

TA’SINA SAPA WIN SMITH: Right now, again, my ancestral homelands are facing yet another threat: the Keystone XL pipeline, which will snake right underneath the Cheyenne River, for which my tribe is named. …

We will no longer stand by the decisions made by our world leaders for the sole purpose of profit. It is time now that we rise up. Rise up, my brothers and sisters. Rise up and stand against 1 million species’ extinction. Rise up and stand with the original caretakers of these lands, the indigenous people. Rise up and stand against cultural genocide, ecocide, environmental catastrophes and illegal resource extractions. The time is now that we transition into a new era, away from this fossil fuel addiction. The land for which we stand on has been taken by force to fuel this addiction up pollution, profit and greed. It is time now, my brothers and sisters, to rise up and stand with the indigenous people.

JANE FONDA: I’m going to give you Bill McKibben, who is not here. He is currently occupying the Chase Bank, from which he speaks.

BILL McKIBBEN: There’s about 25 of us inside the Chase, JPMorgan Chase, bank branch. And this really marks not only the escalation of Fire Drill Fridays, but it marks the real national launch of this Stop the Money Pipeline campaign.

Now, we’ve got to be here because Chase Bank is the single biggest funder of fossil fuels on planet Earth. They’ve put $196 billion into oil and gas over the last three years. They are the ones — they are the ones who are paying for the carbon bomb, OK? They’re a carbon major just the way that Exxon or Chevron or Shell or BP are carbon majors. So that’s why we’re here today doing civil disobedience and beginning what’s going to be a winter and spring of massive civil disobedience, of massive unrest about the financial system.

If banks like Chase Bank stopped funding the fossil fuel industry, they could not go on building pipelines. They could not go on making new coal mines and building new LNG terminals and doing all the other things that are making our planet, week by week, less habitable.

When we look at those pictures from Australia, yes, we see the absolute horror of people whose lives are turned upside down and animals that are killed and ecosystems that are wiped out, but we also see, fully visible in those flames, the dollar signs that led to that conflagration. That’s what is at the bottom of the crisis that we face.

TARA HOUSKA: The last time I was here, speaking behind a rally podium similar to this one, I came from a resistance camp in Standing Rock. I came from seeing my friends tear-gassed, maced, bitten by dogs. I came from being arrested and put into a dog kennel. I came from watching cops chase Indians on horses across the plains, shooting at them — history happening again and again.

And this time around, I’m coming from a resistance camp in Minnesota, where I’ve been living 200 yards off a proposed pipeline route that wants to go through my people’s territory, through our sacred wild rice. So, Line 3 hasn’t started bulldozing yet, but they’re set to get their final permits the next couple weeks. And they’ve been busily arming themselves to the teeth in northern Minnesota, which is really crazy to see. …

JOAQUIN PHOENIX: But something I think isn’t oftentimes talked about in the environmental movement or in the conversation about climate change is that the meat and dairy industry is the third leading cause of climate change. And I think sometimes we wonder what can we do in this fight against climate change, and there’s something that you can do today, right now, and tomorrow, by making a choice about what you consume.

ERIEL DERANGER: Édlánet’é. Dënesuliné, Eriel Tchekwie húshye. Deranger betsíeni hésli . My name is Eriel Tchekwie Deranger, and my name means “thunder woman” in my language. I’m very lucky to not have a colonial name. I just have an indigenous name.

I want to honor the traditional territory of the Anacostans people whose land we are atop of now. We must recognize that the history of the United States is a history of settler colonialism, rooted in white supremacy, African slavery, and policies, supported by the church and state, of genocide and land theft. These systems attempted to demonize, devalue and extinguish indigenous peoples’ languages, political and cultural structures, ideological perspectives and way of life. All of this was done with the end goal of erasing us from the landscape and from human consciousness. It’s time for us to abandon these patriarchal and colonial ideologies rooted in things like the doctrine of discovery and terra nullius. We have always been here, and we were never discovered.

I come from the Athabasca Chipewyan First Nation in Treaty 8 territory. We are Dënesuliné people. Dené, the very core of that word, means to flow from the earth. The land is the very essence of who we are. Our identity is intrinsically linked to the land. It nurtures our bodies, our mind, our culture and our connections to our role on this planet as stewards. As Tara said, 5% of the global population is indigenous peoples, but we protect and steward 80% of the world’s biodiversity. We occupy between 22% and 65% of the landmass. We are the protectors of the land.

Today, humanity is facing a global crisis: climate change. Indigenous peoples are not only threatened by colonial policies to eradicate our civil and human rights, but our very culture, our identities, which are directly linked to our places of origin, are now threatened by man-made climate change, precipitated by colonial ideologies rooted in manifest destiny and man’s dominion over nature. We must stop this now!

JANE FONDA: And now we have Martin Sheen, my ex-husband.

MARTIN SHEEN: Thank you, Jane. This woman has been one of my heroes nearly all of my adult life. And clearly, the world will be saved by women. Thank God — thank God they outnumber us men.

You know, the Irish tell a story of a man who arrives at the gates of heaven and asks to be let in. St. Peter says, “Of course. Just show us your scars.” The man says, “I have no scars.” St. Peter says, “What a pity! Was there nothing worth fighting for?”

We are called to find something in our lives worth fighting for, something that unites the will of the spirit with the work of the flesh, something that can help us lift up this nation and all its people to that place where the heart is without fear and the head is held high, where knowledge is free, where the world has not been broken up into fragments by narrow domestic walls, where words come out from the depths of truth and tireless striving stretches its arms towards perfection, where the clear stream of reason has not lost its way into the dreary desert sands of dead habit, where the mind is led forward by thee into ever-widening thought and action. Into that heaven of freedom, dear father, let our country awake! Thank you.

AMY GOODMAN: Actor Martin Sheen and more than 140 others arrested at the Fire Drill Fridays climate protest in Washington, D.C. Special thanks to Chris Belcher.