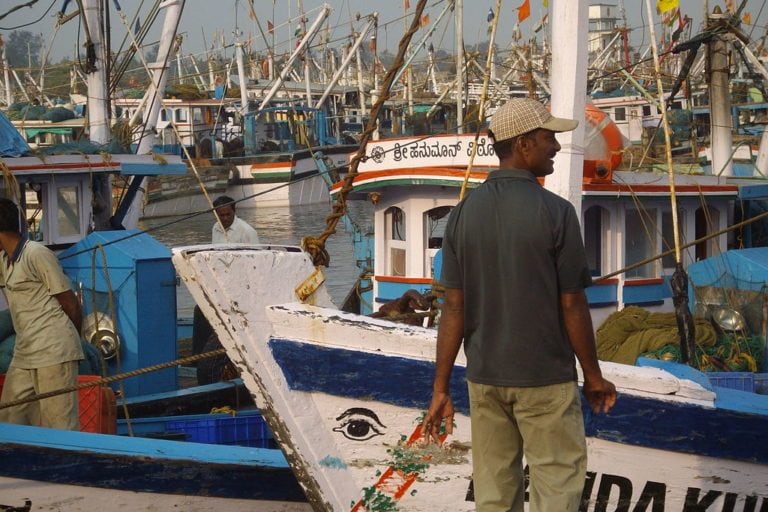 Tonnes of fish being used through unsustainable fishing by the fish meal and fish oil (FMFO) industries which supply feed to global aquaculture chains is wreaking havoc on fish stocks. The FMFO industry was considered a solace for fishermen as they bought trash fish, which is not edible, in the catch. It was so as even their trash fish or the waste catch got them money. But the scenario has changed as the FMFO industries have turned into a threat to the fisheries sector and require immediate attention from the authorities.

A study in India, Vietnam and Gambia by Netherlands based Changing Markets (CM) Foundation highlights the hazards caused due to the present functioning of these industries. Tonnes of fish, including juvenile and edible ones, are being caught, processed and exported to various countries resulting in the collapse of fish stocks and marine ecology, imbalances in food security and causing severe environmental issues, pollution and overexploitation, said the study report, ‘Fishing For Catastrophe’.

As part of the study, in India, two regions were selected – the Mangalore–Karwar belt and the Vishakhapatnam (region) of Andhra Pradesh.

In 2017, India’s aquafeed market was valued at $ 1.20 billion. Its domestic feed mills (The fish feed factories of India ) have the capacity to produce 2.88 million metric tonnes (MT), said the CA study.

Vasudev Boloor, who is Karnataka Coastal Fishermen’s Action Committee general secretary, told Mongabay India that as the FMFO industries buy waste fish or bycatch (fish or other marine species caught unintentionally while catching certain targeted species) from the fishermen, the trawlers intentionally go for waste fish including juveniles and non-edible species of fish which were not earlier targeted for fishing. The CM report claimed that these companies are causing the decline of local fish stock.

“Earlier only a small portion of the catch was waste and that used to be given to the FMFO industries. But things have changed and to generate more income they have started fishing everything in the sea. Juvenile catch is the most serious threat because of which many species have declined in the sea,” said Boloor while adding that the trawlers use small-sized nets which makes it easy to catch juveniles.

Divya Karnad, a marine biologist and assistant professor at the Haryana-based Ashoka University said that the FMFO industries originally started as a solution to the trash fish been generated in the catch.

“Ideally trawlers should take measures for bycatch reduction They are not using it and that is why this waste is generated. Moreover, now fishermen are encouraged to bring more and more waste. Presently, trawl fisheries are mainly dependent on this bycatch income. If the FMFO plants were not there many of the trawlers would have gone out of the sector,” Karnad told Mongabay-India.

Karnad pointed out that each state in India has got specific laws to protect marine ecology but none of them has actually been implemented and the laws just remain in papers.

“Up to the 12 nautical miles, the state government can implement laws (regarding fishing). From 12 to 200 nautical miles, we still have no rules,” K. Sunil Mohamed, principal scientist at the Central Marine Fisheries Research Institute (CMFRI), told Mongabay India.

He stressed that overexploitation of the resources using methods like bull trawling, where the net is tied between two boats and dragged for kilometres to catch fish and light fishing, where artificial lights used to attract fish to a particular spot for an easy catch, are being followed widely.

According to the CM study, in both Mangalore and Malpe ports, the investigators found that by-catch mainly consisted of juvenile and extremely damaged fish. “At both harbours, the investigation team found several piles of pelagic fish, including pomfret, juvenile mackerel, juvenile cuttlefish and silverfish,” the study said.

The study also revealed that in Vietnam, which is one of the world’s leading fishmeal producers, unsustainable fishing practices has caused fish stock reduction and due to which boats are regularly fishing in foreign waters which is prohibited.

The situation in the Gambia is also not different which has one of the world’s richest fishing grounds but despite that nation’s food security is declining over the years, the CA study emphasised. It is due to “fluctuating populations of Bonga fish (also known as shad), which experienced a crash of 40 percent between 2013 and 2014.” The study even said, “Gambian fishmeal plants continue to be involved in social and environmental scandals.”

The study quoted the Indian government’s Agriculture Ministry’s 2017 National Policy on Marine Fisheries in India which had stressed on dangers of the fish feed industry.

“Use of low-value fish species in the fish feed industry is becoming a matter of concern as it can lead to overfishing of such species and by-catch, and could undermine the integrity of the marine ecosystem. The spread of fish meal plants in some coastal states and their overwhelming demand for small pelagics (like oil sardines) has led to overfishing, resulting in reduced stocks of small pelagics in some parts of the country,” the policy said.

Can it lead to the extinction of fish?

Shailendra Yashwant, Environmental journalist and climate change activist, said that though fishermen are aware of the hazards of these industries, they are worried about the decline in the catch.

“They know the dangers posed by fish meal industry on the traditional fisheries. But the fishermen are desperate due to falling catches, reduced days at sea due to bad weather, rising operating costs, debt, the power of contractors and non-fishermen in the business, and thus they are indulging in overfishing, including the catching of juveniles and wild catch, knowing well that there is a market for anything they catch. Those who can afford trawlers, and their numbers are increasing, are shamelessly literally scraping the bottom of the oceans to bring back catch, any catch, to survive,” he said.

CA report said it’s not just the trash fish that goes to FMFO plants. It points out that about 30-40 percent of the catch in Karnataka goes to the FMFO plants including the species fit for human consumption.

“Significant quantities of ‘food’ rather than ‘trash’ fish are being diverted to the fish meal plants. Local people rely on locally caught fish for their protein needs, and it is becoming harder for them to compete within the new system,” said the study pointing towards the imbalances it creates on food security. It explained that agents of such plants bypasses the traditional auction system and get the entire fish in a vessel to the factory.

Krishna, a fishermen association representative from Malpe in Karnataka, said that the FMFO plants use sardine, mackerel, squid lizard fish and almost all the edible varieties.

Food security to be impacted?

The CA report emphasised that sardine is a staple food in the south of India and its decline has affected food security. “In June 2019, media outlets reported that the drastic decline in sardines has left Kerala’s fishermen in crisis and is affecting food security in the region,” said the report.

“We cannot find the original oiled sardine now. It has been lost. Sooner we will lose other species too,” Krishna said.

Divya Karnad said since most of the FMFO is exported it requires a minimum quality to meet the standards given by foreign countries, which lead these plants to go for quality fish than trash fish.

“Trawl net fishers catch fish on a large scale, maybe in one net, they get five tonnes. When this large quantity is brought to the land its price goes down, where the FMFO industries buy them in large quantities. So in a way, they promote destructive fishing,” Karnad added.

“There are certain species which are not edible that can go to the FMFO industry. But they are not the one we consume. Peruvian anchoveta is similar to sardines, but are not consumed directly by humans, while oil sardine is the staple food here (in south India). Sardine also has high nutritional values so it should not be included in the FMFO industries. When certain FMFO industries had tried to standardise sardine catch for the FMFO, we had objected to it,” said K. Sunil Mohamed.

He added that there are many unhealthy practices that are being followed by FMFO industries. “Apart from unsustainable fishing practices they also get fish from boats by trapping fishermen. They pay an amount to fishermen in advance and get a full catch in their boat. The government doesn’t have control over the number of industries coming up in the country,” said Mohammed.

The CA report also claimed that most of the plants located along the Indian coast are violating the Coastal Regulatory Zone regulations.

It revealed that their investigators while visiting a few FMFO plants in Ullal of Mangaluru had found that there were no waste treatment plants for the industries.

“After fish oil and fish paste was extracted, the remaining wastewater, called stickwater, was dumped into the backwaters adjoining nearby mangroves. The units visited did not have a wastewater treatment plant,” said the report.

“They loot fish from the sea and dump waste into the sea after production. If a poor fisherman has to build his house he is tangled with CRZ rules, but industries can easily bypass laws,” said an official of the Karnataka government, who works among the fishermen community in Mangalore, while seeking anonymity.

“People living near the plants suffocate with a putrid odour. These industries cause water pollution and air pollution. They dump effluents to the sea as well as to nearby rivers. Those who voice against them are being threatened by the companies,” he alleged.

Is there a solution?

The study recommends soybean and palm-oil production as an alternative to the FMFO. Fish feed made of food waste, mealworms, algae, is being globally discussed as sustainable alternatives.

“In 2012 in Kerala, there was a huge decrease in Indian oil sardine stock when the government had introduced certain rules specifying the size of the fish to be caught in order to prevent juvenile catch. The mesh sizes and shape of the net were also prescribed by the government. So, strict rules on mesh size and shape can reduce juvenile catch,” said K. Sunil Mohamed.

He further said that Karnataka has also implemented laws against juvenile catch of certain species but they haven’t taken steps on restrictions over mesh size.

“There are recommendations given to Tamil Nadu, Andhra Pradesh and Maharashtra (by CMFRI). We hope they will implement these restrictions soon. Regulations on the mesh size of the net are the only solution to control juvenile fish catch,” he added.

According to him, strict adherence to standards by the aquafarms can also be a solution.

“There are certain standards prescribed by  Marine Stewardship (MSC), Aquaculture Stewardship Council (ASC), and IFFO (International Fish Meal and Fish Oil Organisation), The Marine Ingredients Organisation. The fish farms accredited by these standards accept only fish feed from sustainable fisheries. So pressure from the buyers for sustainable fisheries can be a solution,” said K. Sunil Mohamed.

However, the CM study alleged that certification from these standards was not effective to curb unsustainable fishing.

“Many of the unsustainable practices witnessed during investigations in India, Vietnam and the Gambia, have received a stamp of approval by one or more of these certification schemes,” the study said.

(This story was first published on Mongabay)