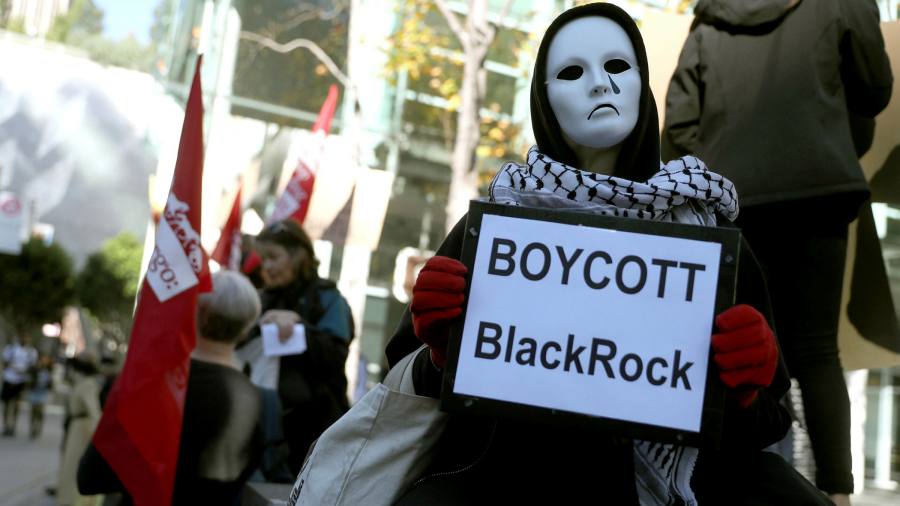 A group of Catholic nuns has taken aim at BlackRock’s record on climate change, adding their voice to a growing chorus including Al Gore that claim the world’s biggest fund manager is not doing enough to tackle global warming.

Mercy Investment Services, the investment programme of the Sisters of Mercy of the Americas, lambasted the $7tn asset manager’s voting record on climate change resolutions at the annual meetings of companies in which it invests.

The sisters have filed a motion ahead of BlackRock’s annual meeting next year, calling for the asset manager to review its voting policies related to climate change. The resolution has been co-filed by more than 10 other BlackRock shareholders, including several other religious groups.

Mercy Investment Services said that in 2019 BlackRock supported only six of 52 climate-related resolutions, such as requests for enhanced disclosure of carbon emissions or those calling for an adoption of greenhouse gas reduction goals. This is despite BlackRock’s own research suggesting climate change poses a risk to investment returns.

In the resolution, Mercy Investment Services said the asset manager’s voting practices “appear inconsistent with its statements about climate change”, posing a reputational risk for the company with both clients and investors.

“We believe it is BlackRock’s fiduciary responsibility to review how climate change quantitatively impacts . . . portfolio companies, evaluate how specific shareholder resolutions on climate may impact shareholder value, and vote accordingly.”

A similar resolution was filed for the 2017 annual meeting, which was later withdrawn by shareholders after engagement with BlackRock. However, shareholders said there had been “woefully inadequate progress” since then on climate voting, leading to this new shareholder motion.

BlackRock said it would speak to filers of the resolution. It added its stewardship team had “engaged with 370 companies globally on a range of environmental topics”, including the business impact of a shift to a lower-carbon economy over the past two years.

“Where companies have not responded to our engagement or where we do not see sufficient progress and attention to climate risk over time, BlackRock investment stewardship continues to vote against directors and, where relevant, for shareholder proposals,” the company said.

BlackRock has faced intense scrutiny in recent months over its record on climate change. Its name was missing from a list of 600 investors with $37tn in assets that have called for urgent action against climate change this month.

A recent study by InfluenceMap, an environmental non-profit group, was also critical of BlackRock, saying the asset manager had one of the worst records of big investment houses on supporting resolutions related to climate change at annual meetings.

Al Gore, the former US vice-president, this week said BlackRock had to decide whether it wanted to continue to finance the destruction of human civilisation.

Timothy Smith, director of ESG shareowner engagement at Boston Trust Walden, a US asset manager that co-filed the resolution, said major asset owners, such as pension funds, are pressing their investment managers to vote proactively in support of resolutions seeking climate leadership by companies.

“BlackRock’s proxy climate votes are now becoming part of their ‘report card’ by their clients,” he said.

“There is increasing public scrutiny of the proxy voting record on climate-related shareholder resolutions by major investment firms such as BlackRock, Vanguard, T Rowe Price and JPMorgan,” he said.

“In light of the dismal 2019 votes on climate by these firms, investors have filed shareholder resolutions urging a review by management.”