Some community members pressed UI officials on Wells Fargo’s ties to the fossil-fuel industry after the UI discussed working with the company as a consultant on the utility system public/private partnership. 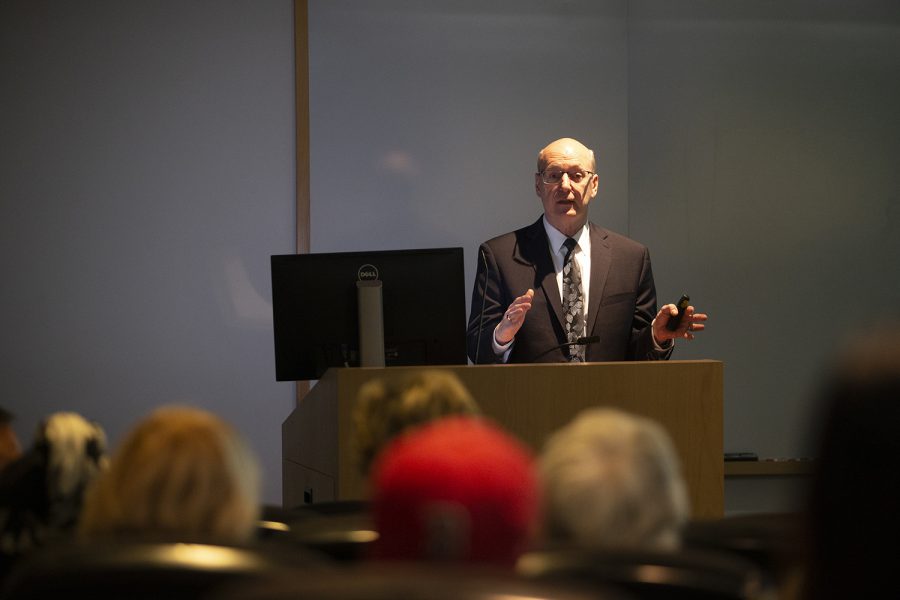 University Chief Financial Officer and Treasurer Terry Johnson speaks at the utility public private partnership information meeting in The Medical Education Research Facility on Thursday, December 12, 2019. The meeting focused on explaining the 50-year partnership between the University of Iowa, Meridiam and ENGIE.

Attendees of the afternoon Medical Education Research Facility forum raised concerns with the UI’s hiring of financial adviser Wells Fargo because of its major financial ties to the fossil-fuel industry, which has played a principle role in human-made climate change. The U.S. Energy Information Administration reported that in 2017, fossil-fuel burning was responsible for 76 percent of U.S. greenhouse-gas emissions.

According to a report from Rainforest Action Network, a group of environmental organizations, Wells Fargo has invested nearly $152 billion in the fossil-fuel industry since 2016 — second only to investment firm JP Morgan.

UI media-relations director Anne Bassett said the UI has not paid Wells Fargo to date but is contracted to pay for travel.

Wells Fargo is expected to receive around 1 percent, or roughly $11.65 million, of the $1.165 billion upfront lump sum that the concessionaire Hawkeye Energy Collaborative will pay the UI to operate and maintain the utility system. The concessionaire — a partnership of energy company ENGIE and investment firm Meridiam — will partner with the UI for the duration of this 50-year deal.

She said the UI has paid legal counsel Jones Day $1.05 million, $192,453 to Jacobs Engineering for preparing a utility system Condition Assessment Report, and $33,562 to Ernst and Young as the public/private partnership energy-sector tax expert.

Bassett said the $133 million in outstanding bond debt on the utility system and the rest of the consulting fees will be paid after financial close, which comes 90 days after the Tuesday signing of the agreement — some time in March 2020. The finalized consulting-fee totals won’t be available until that time, she said.

Asked by the DI about the response to those concerns, given that a majority of the UI’s payments to the consultants will go to Wells Fargo, Senior Vice President for Finance and Operations Rod Lehnertz dismissed those concerns and said the UI wouldn’t have been able to make this far without Wells Fargo and the other consultants, which he said brought expertise to the project.

“They’re a consultant of ours,” he said of Wells Fargo. “They’re not a financial partner of ours. I mean, you can’t get consultant fees for free. It costs what the market bears for this, and that’s part of the process of delivering this, not part of our investment, not part of our working with a partner we’ll be with for 50 years.”

Meanwhile, ENGIE and Meridiam touted their commitment to sustainability and health and safety initiatives at the two Thursday public forums in the IMU and the Medical Education Research Facility.

“We’re flexible, we’re innovative, and we’re going to find out what we can do to be carbon-free, as well as coal free, starting off at the UI,” he said.

Greene said ENGIE is focused on eliminating fossil fuels and looking toward using biomass as a fuel source.

“We have 1,000 researchers and technicians globally, within 12 centers,” he said. “Key areas of focus during this initiative is the generation of carbon-free energy that emits no carbon dioxide.”

Greene said Meridiam and ENGIE have a commonality in terms of sustainability and longevity. ENGIE has shifted focus from being a wholesale generator in North America, Greene said, prioritizing transitioning to more renewable energies. As of 2017, the company has divested from entities that are high in carbon-dioxide emissions.

Scott Derby, a representative from Meridiam, said the company is involved in 16 similar public/private partnerships. The firm uses the United Nations Sustainable Development Goals, investing in projects with a positive social and environmental impact.

Ohio State University also partners with ENGIE in a public/private partnership to manage its energy infrastructure. ENGIE Office Manager Layne Toops teared up when talking about the positive changes its partnership with ENGIE have made to campus.

Toops said she was skeptical when OSU first began exploring the partnership, but once ENGIE came to campus, it worked with university employees and learned about the utilities system from them.

She said ENGIE funded various projects on campus, such as internship programs and charitable pursuits, and ventured further in the community by donating sustainability kits to K-12 students.

“I think the University of Iowa has made a great decision,” she said.

While the UI will invest around $999 million in net proceeds from the agreement into a newly created endowment, the UI will pay the firms $35 million annually for the first five years of the 50-year deal, with a 1.5 percent increase every year after.

Johnson said at the Thursday morning IMU forum that there is risk involved in the UI’s investment in the agreement, but added he felt confident moving forward based on the advising the UI has received.

“That’s a big number — I get that,” he said. “A lot of our investment advisers have helped us to think through the right way to invest that near billion dollars in order to be clear that we can be highly confident that we can make the $3 billion total over the full 50 years — but there is risk.”