At 15 years old, Julie* was first trafficked. Her husband became her second trafficker and it wasn’t until he was sent to jail for drug charges and she ended up in a detention center in the Upstate that Julie was able to understand she had choices in the direction her life would take.

According to the U.S. Department of Homeland Security, trafficked is defined as; “the use of force, fraud, or coercion to obtain some type of labor or commercial sex act.”

Through an employee at the detention center, Julie met with people from Switch, a local nonprofit that helps victims of human trafficking, and she was able to get out. Switch helped her leave the state and enter a long-term restoration home for human trafficking victims, where she is now on her way to starting a new life, having been empowered to make a better choice.

Not all victims of trafficking look like Julie or have been conditioned by their captors to accept a life of being trafficked. As beautiful and desirable as Greenville is from the outside, there is an underbelly of trafficking that runs through the community, just like most major cities across America.

“Atlanta is the number one city in human trafficking in the country and Charlotte is in the top 10. What we are seeing is that the traffickers themselves see these cities as saturated so they come to Greenville because opportunities are more plentiful,” said Zaina Greene, the executive director of Switch and co-chair of the Upstate Human Trafficking Task Force.

When Switch was founded in 2012, people just didn’t believe trafficking happened in Greenville. But as the group started pushing awareness of trafficking through programs in the community and schools, residents began to understand just how prevalent it was in town.

“One of the more positive things for us was when the community started to see victims and call us and ask how to help.  When that happened, there was a shift in the mindset,” Greene said. “We had a woman brought to our office who was first victimized at age 5 and now she was 22. It was a sobering moment for that person and agency. When you put a face to the issue, everything changes.” 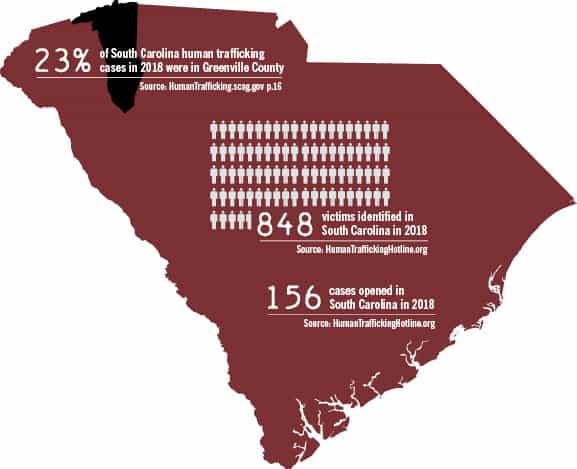 In 2012, South Carolina received a “D,” indicating that laws were not as protective as they could be towards minors who were trafficked. In 2018, the state received a “B” in part because sentences for those convicted of trafficking doubled from 15 years to 30 years and the institution of mandatory training of law enforcement about trafficking.

Switch representatives say there is more to do, however. In July, part of an international sex trafficking ring was busted in Greenville where commercial sex was being sold out of an apartment on Pelham Road. Women were being flown into Greenville-Spartanburg International Airport for two-week stints as prostitutes until police were tipped off and launched an investigation that led to arrests.

Last year, 23% of new human trafficking cases in the state were opened in Greenville County, according to the South Carolina Human Trafficking Task Force.

In August, Bon Secours hosted its third such seminar. Attendees came from a variety of backgrounds, including health care, social services, law enforcement, education and business. In addition to the more than 1,000 people who attended in person, the livestream was viewed by more than 30,000 people from around the world.

One of the outcomes of these seminars has been a clinical-training video, produced through a collaboration between Bon Secours and the South Carolina Hospital Association, that will be used in all South Carolina hospitals to train staff to recognize victims of trafficking.

Partnerships have been key to combating human trafficking in Greenville and raising awareness of what it looks like and how to help.

The South Carolina Human Trafficking Task Force, run out of the state Attorney General’s office, is composed of dozens of groups that seek to end human trafficking, including Switch and Jasmine Road, a long-term residential program in the Greenville area where women who are victims of trafficking or reliance on drugs can find hope and healing in a safe place. The Junior League of Greenville has recently started to provide resources for the women that these two organizations serve such as clothing, shoes and accessories from the Junior League’s Nearly New Shop.

“What we are seeing is that the traffickers themselves see these cities as saturated so they come to Greenville because opportunities are more plentiful,” Zaina Greene, executive director, Switch

But housing for victims of trafficking remains at the top of the list.

“Our greatest need right now is immediate or temporary housing for victims,” Greene said. “The first thing you can do for a victim is to meet the need for a safe place for them to lay their head. Stabilization homes would make them more successful, give them time to rest and stabilize and give them authority over their life — it’s an important key that’s missing that would set them up for success.”

More than 140 women have come through the restoration program at Switch and over 200 others through the intervention program. The nonprofit holds a yearly gala as well as a Sweetheart Ball, which helps encourage the family unit and empowers young girls to know their worth. The groundwork has paid off in the community.

“We’ve seen a drastic change in the community since we started, which is a huge success,” Greene said. “Our community now has recognized a need for an anti-trafficking organization.”

*Not her real name