The BB&T-SunTrust deal is officially sealed, but top executives Kelly King and Bill Rogers acknowledge that their work has only begun.

Ultimately, their No. 1 job will be to prove that the biggest merger since the financial crisis — valued at $30.8 billion based on the $53.48 closing price of BB&T’s stock on Thursday — was a good idea.

The combined company, called Truist Financial, has $470 billion in assets, $303 billion in loans and $327 billion in deposits. The deal was completed Friday, 10 months after it was announced.

King, Truist’s chairman and CEO, and Rogers, the company’s president, chief operating officer and CEO-in-waiting, are focusing initially on cutting $1.6 billion in expenses while identifying revenue opportunities. They said they are confident Truist will hit its financial targets. 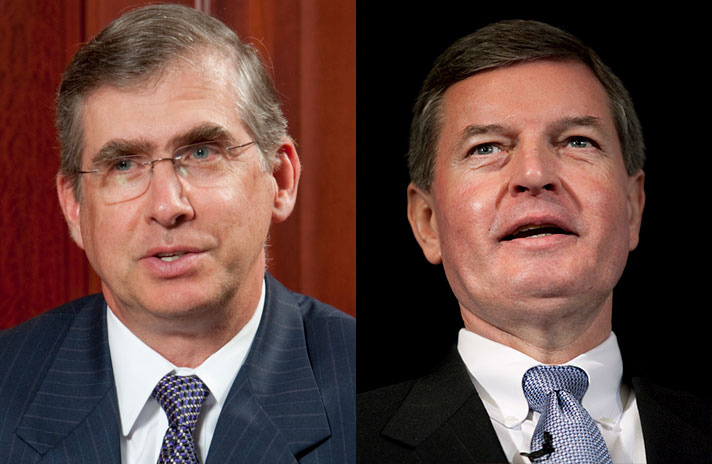 A big part of the cost-cutting plan — branch closings — is still being evaluated. Truist agreed to divest 30 branches to resolve antitrust concerns, but in an effort to reassure customers it pledged to keep all of its remaining branches open for at least a year after the deal’s completion.

Final systems integrations need to be completed, many employees will have to relocate to a new headquarters in Charlotte, N.C., and questions will have to be answered about job cuts.

In an interview just ahead of the closing, King and Rogers reflected on the yearlong process to get regulatory approval of their high-profile agreement, provided an update on technology and integration efforts, discussed where Truist’s best opportunities lie, and offered reassurances that the company will not pose a material risk to the U.S. financial system.

Here is an edited transcript of the conversation.

With the deal complete, where are you with cost-cutting plans?

KELLY KING: On the cost-cut side, we agreed that we wouldn’t close any overlapping branches for one year after closing. Moving into 2020 we’ll be putting together our branch-consolidation plan. There are lots of branches that are literally side by side. In regard to our roughly 3,000 programs and systems, we’re making good progress. We’ve agreed on 90% of the ecosystems that will drive Truist. Work will start immediately on putting those ecosystems together to get efficiencies out of the backroom.

What about revenue opportunities?

ROGERS: Of course, we didn’t include revenue in our economic analysis of the deal, but there’s tremendous opportunity. When you look at the insurance prowess at BB&T, we’re impressed with the teamwork there. Conversations have started, and while we couldn’t start sharing information until day one, we have been looking at protocols.

Then you have the investment SunTrust has made in capital markets. We’ll be able to share and expand that with BB&T’s client base. We’ve established protocols for how we share business. I’m impressed on the revenue side that we’ve been choosing the best models and business practices and leveraging those for the benefits of the clients. We’ve got that Truist focus going forward. There are so many great things that BB&T does. The same goes for SunTrust.

KING: The good thing is that we don’t have to wait for conversion to start working on revenue.

Any update on the new Charlotte headquarters?

KING: We’re making progress. We have a lease in place with an option to buy. Our executives have already been meeting there for the last few months, and they’ll be there on Monday morning. Construction is under way in regard to permanent renovations. We made sure we didn’t have to wait any more time after legal day one. We love the building. It’s right in the center of Uptown . It will serve us very well.

ROGERS: The fun part about the building is that it’s a blank canvass, which is exciting as we think about how people work together. It is an ability to create something new.

Where are you in terms of the tech strategy?

KING: We started out with a concept of how we thought banking would play out in the new world. We found out through lots and lots of dialogue that the concept is proving to be reality, which is really exciting.

As we talked more with teammates about our T3 strategy we found out that not only did it resonate with them but it gets them excited. We’re in the process of making sure that the concept is embedded throughout the entire company. We want people thinking about T3 every day. The canvass must have T3 across the board. That’s how you win, because consumers are demanding more, and a lot of that is tied to technology.

ROGERS: When you think about the opportunities, they exist within each of Truist’s 30,000 applications. There’s a great level of excitement and a great level of looking forward to making choices. There are very few opportunities in a career to do that. It has created a spring in everybody’s step.

The regulatory process, by and large, seemed smooth. How do you achieve that?

KING: It was basically frictionless. I was told by several senior regulators there was no legal reason to object to the deal. We knew we had a clean deal that should be approved expeditiously, but we didn’t take anything for granted. We took on an attitude that this was a big deal that should get scrutiny. This deal deserved a thorough process, and we were supportive of that. That included the hearings in Charlotte and Atlanta and appearing before the House committee.

We didn’t go into that kicking and screaming. When we sat through those long, eight-hour days listening to more than 120 community groups, I tried to blank out SunTrust and BB&T to hear what people were saying. A lot of the feedback was encouraging and made me very proud. As CEO, it was an affirmation of what we’re doing.

ROGERS: It was a listening tour. I think our organizations are strong listeners in the community. We care about what’s important to our shareholders, clients, regulators and the community. The hearings reinforced some of the things we’re doing. We wanted to make everybody proud and consider everyone’s opinions.

KING: When you look at systemic risk, there’s no financial basis to conclude that Truist presents any material risk to this country. When you look at the Fed’s mathematical risk assessment, which is a sophisticated process for assessing banks, BB&T-SunTrust’s combined score is far lower than those of the largest institutions.

ROGERS: At the end of the day we were proud to get the unanimous support of all our regulators.

KING: That comment was appropriate. There’s no question that larger companies need to pay a huge amount of attention to cyber risk. We are. It’s our top priority. Anyone who isn’t doing that is making a big mistake. It is something we’ve tried to take a lead on. But all banks are in it together. We all win or we all lose. It’s not competitive. It should be about making smart investments.

SunTrust agreed to divest 30 branches by selling them to First Horizon. Why was it selected?

ROGERS: already in our market and had a reputation as a good purchaser. They were able to do one transaction and commit to our clients and employees.

Very few banks have announced mergers of equals since BB&T-SunTrust. Are you surprised?

ROGERS: Our opportunity was idiosyncratic in terms of the tremendous and unique benefits, in terms of the culture, our markets and our focus on the MOE. We were willing to make the hard decisions. And the financial benefits of our great merger are compelling by virtually every metric. I’m not sure many other deals could do that.

KING: I’ve been involved with quite a few mergers in my career. They are hard to do, and it really takes two CEOs who are forward-looking and willing to commit to doing the right thing. It was clear on the first day that we wanted to do something important, something right and something that would make the world better. Not many people see the world that way, but if they do we’ll see more deals.