Fed, FDIC sign off on BB&T-SunTrust megamerger — with a catch  American Banker

BB&T and SunTrust have crossed the last major hurdles to completing their megamerger.

The Federal Reserve and Federal Deposit Insurance Corp. on Tuesday approved the $28.2 billion deal. The approvals largely pave the way for BB&T to complete the acquisition by year-end; their targeted closing date is now Dec. 6.

However, there were some surprises that came with the approvals.

Martin Gruenberg, an FDIC board member and a former chairman of the agency, said in a separate statement that, while he did not vote against the merger, “it would be a serious mistake not to recognize and address the very significant financial stability risks the merged institution would present.”

The Fed also hit SunTrust with a consent order for unfair and deceptive practices tied to “misleading or inaccurate statements” the company made between 2013 and 2017 about the operation and billing for certain add-on products. The Fed noted that SunTrust had already ended those practices and has repaid about $8.8 million in fees to customers.

BB&T committed to complying with SunTrust’s enforcement action, including implementing procedures to verify the refunds and providing additional refunds, if required. 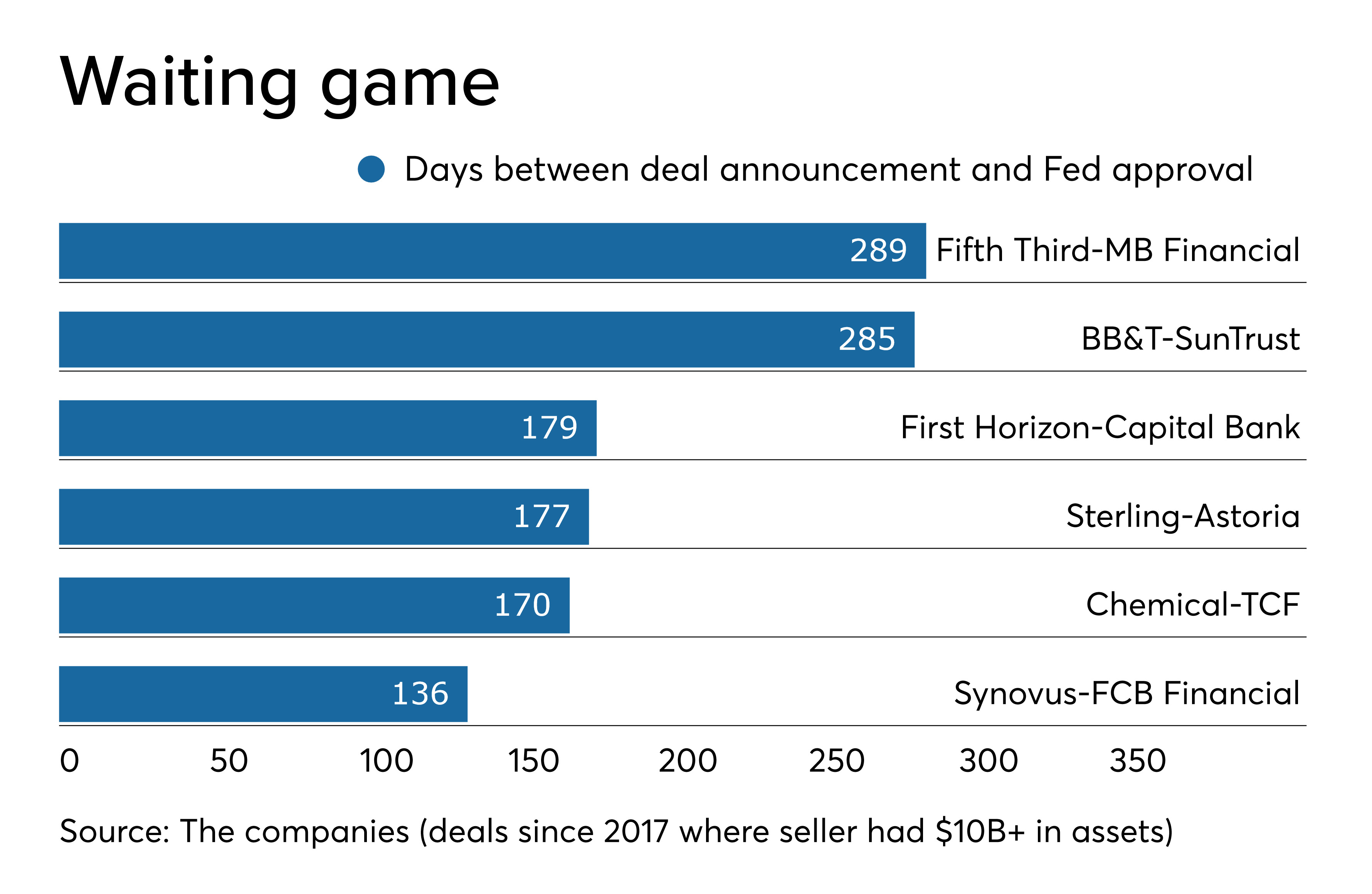 “We are pleased to have received regulatory approval to merge two strong companies with complementary business models and a high level of cultural alignment,” said BB&T Chairman and CEO Kelly King, who will hold the same titles at the combined company, which will be called Truist Financial. “We’ll be even better together for our clients, teammates, communities and shareholders.”

The Fed, in its order approving the merger, disclosed that it received 1,050 comment letters, with roughly 90% supporting the deal. Proponents largely touted each bank’s charitable contributions and investment programs.

Dissenters raised a series of issues, including criticism of the companies’ lending records, worries about job cuts and concerns that the merger would create a “too big to fail” bank.

“After a review of all the facts of record, and for the reasons discussed in this order, the board concludes that the statutory factors it is required to consider under the Act are consistent with approval of the proposal,” the Fed determined.

The FDIC noted in its approval that BB&T agreed to provide the agency with post-merger updates “describing any material changes to its legal structure” since the company’s last insured depository institution resolution plan, including “changes that could impact information technology integration.”

The combined company, to be based in Charlotte, N.C., will have $301 billion in loans, $324 billion in deposits and serve more than 10 million U.S. households. The companies announced plans in July to make $60 billion in loans or investments in low- and moderate-income communities between 2020 and 2022.

The Fed’s blessing came 285 days after the deal was announced. Though long, the process went relatively smoothly for BB&T and SunTrust since theirs is the biggest bank merger of the past 15 years.

When regulators hosted public hearings this spring in Charlotte and Atlanta, very few community groups spoke out against the merger. In fact, BB&T and SunTrust assembled a number of organizations that touted their individual contributions — and combined potential to do even more.

Lawmakers were relatively nonconfrontational with Kelly King, BB&T’s chairman and CEO, and Bill Rogers, his counterpart at SunTrust, during a July 24 hearing to evaluate the merger’s impact. Such hearings are a rarity for bank deals.

While Democrats on the House Financial Services Committee peppered executives with questions about the likelihood of branch closures and job losses, as well as about the effect on customer service, they did not say they opposed the deal.

The N.C. Commissioner of the Banks approved the deal on July 10. Shareholders of both companies overwhelmingly endorsed the combination during July 30 meetings. BB&T’s investors also approved adopting the Truist name.

The Justice Department required the companies to divest only 30 branches, or less than 1% of the more than 3,100 locations they have now. First Horizon agreed to buy $2.4 billion in deposits from SunTrust, or 78% more than what the merging banks were expected to transfer. At 3.4%, the deposit premium First Horizon will pay is less than the 5% to 7% range some industry observers expected. The agreement was enough to satisfy the Justice Department, which said Nov. 8 that it would not object to the merger.

BB&T and SunTrust will likely close a number of overlapping branches after deal closes.

King and Rogers, for their part, have stuck to a script touting how the deal will allow Truist to make greater investments in communities and compete more effectively in areas such as digital banking. They have also vowed to promote diversity within the combined bank.

The only thud heard so far has involved the decision to adopt the Truist brand. Social media reception was harsh, and industry experts have said that the company will have to work hard to shape perceptions of the new identity.

No decisions have been announced about the corporate logo or exact wording of signage on branches and sports venues.

King will serve as CEO until September 2021 and as chairman through March 2022. He will remain on the board until the end of 2023.