Subscribe to The Financial Brand via email for FREE!

Through the years of its troubles, when it hemorrhaged reputation and people, Wells Fargo never backed off from its determination to innovate. The fourth-largest U.S. bank has been a digital banking powerhouse for years on both the retail and business banking sides. It has 30 million digitally active customers — about 43% of its total customer base.

The bank’s Innovation Group, a key element of that success, has been led since May 2018 by Lisa Frazier, EVP and Head of Innovation, making her one of the highest-ranking women in financial technology.

Frazier, an Australian, has an unusual background for a digital banking leader. For the first six years of her career she worked as an engineer at an ExxonMobil refinery near Melbourne. Initially she oversaw gasoline production, a high-pressure job for a young chemical engineering graduate. “The refinery was in the western suburbs of Melbourne,” she says. “You definitely didn’t want to get anything wrong.” She says the job taught her attention to detail and execution of plans. 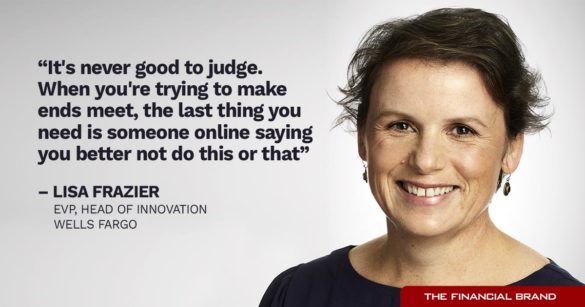 Frazier’s first banking job was back in Australia where she was Chief Digital Officer for Commonwealth Bank of Australia, the country’s largest bank, heading up a 700 person unit. Since leaving CBA in 2015, she has held several advisory posts, two at banks — ANZ and Citi — and two at fintechs — Jacobi and SigFig.

Much of the transformation work is done at the line-of-business level and involves “ideating, redesigning and reimagining the experience,” Frazier states. Some transformation, however, is at the enterprise level — the strategic application and operation of the AI platform, for example. “We’re the team thinking about the future applications of AI and then working with the technology team to create models to go into production,” Frazier tells The Financial Brand.

An example of operational responsibility is Greenhouse, Wells Fargo’s mobile-first banking app designed to help improve money health for people such as students or workers who are paid irregularly.

“Fundamentally I believe a good idea can come from anywhere,” Frazier maintains. “I sit here as head of the Enterprise Innovation Group, but everybody at all levels should feel they have the tools and opportunity to create new ideas or new uses of technology.”

A major ongoing priority for Frazier’s group is AI, which she sees as the key to the future of banking.

REGISTER FOR THIS FREE WEBINAR

How to Connect with Consumers Across Devices Post COVID-19

As a result of COVID-19, the vast majority of face to face communication has been eliminated, while the need to communicate with customers has never been more important.

AI Will Make Banks the ‘Waze’ of Financial Journeys

Bank uses of AI are numerous and growing, including security, compliance, chatbots and marketing. However, Frazier thinks the biggest application will come from personalization.

“The future of banking is going to be very personalized — one to one,” Frazier states. “Banks need to become more relevant in the moment for a consumer who has a particular problem. The power of data and artificial intelligence can help us do that.”

“Financial health is an area where AI-powered personalization will be hugely important for financial institutions.”

Further, the Wells executive believes that financial health is an area where AI-powered personalization will be hugely important for financial institutions. Frazier uses popular navigation apps as an analogy to bring home the point.

Financial health apps should function much like how Waze and Google Maps get you from point A to B, even if you change course midway along the route, she insists. As Frazier explains: Suppose a couple is worried about their debt (point A) and wants to reduce that debt (point B).

“With the use of analytics and AI, we should be able to not only help chart their course to reduce debt, but as they make decisions along the journey, help them see in the real time what the impact would be on their plan,” says Frazier. And if an unexpected “traffic jam” — a household maintenance issue or a medical expense —comes up, Frazier adds, the bank app should be able to help consumers navigate through it.

“People have to live life, too, right?” the down-to-earth Frazier continues. “So if they really need to get away for a weekend and it wasn’t in the plan — like taking the exit off the freeway, to continue the analogy — that’s fine, ‘Off you go’. We should be able to automatically recalculate what it will take to get them back on track to point B.”

Scolding is not part of the picture. Coaching, yes, nudging, sure — but no guilt trips.

“It’s never good to judge,” Frazier says in all seriousness. She tells The Financial Brand that growing up, she witnessed the financial difficulties her parents went through after the family farm “was wiped out by Mother Nature.”

“When you’re trying to make ends meet, the last thing you need is someone online saying you better not do this or that,” Frazier firmly believes. “Using AI is about giving people the information they need in the moment to make the decision they want to make.”

Right now, however, banking data is mostly historical, Frazier notes. “It doesn’t have a forward view.”

Why — and How — Platforms Will Change Banking

Frazier believes that the platform model will be crucially important for the future of financial institutions. The platform concept is quite broad with many ramifications.

But the concept is not complicated. Ron Shevlin, Managing Director of Fintech Research at Cornerstone Advisors, writing on the subject, cites this definition: “Plug-and-play business model that allows multiple providers and consumers to connect, interact, and create and exchange value.” The key is that it refers to a business model, not a technology. Amazon is often cited as an example of a platform, as are the Chinese e-commerce giants Alibaba Group and Tencent.

In addition, banks and credit unions can act as platforms themselves, providing APIs to third parties to connect with the institutions’ systems and data. Several banking providers large and small have begun to do this. Wells Fargo is actively involved in building out both capabilities — being part of external platforms and bringing in companies to be part of Wells Fargo’s offerings, according to Frazier.

“Customers will increasingly access financial services through technology platforms or ecosystems and choose the most convenient place for banking,” Frazier told Fintech Finance. “APIs and open banking create a better customer experience by providing more transparency, control and enhanced security.” As an example, she points to the Wells Fargo Gateway, an open-banking channel that allows business customers to integrate Wells Fargo products, services, and information into their own digital environments via APIs.

The world is moving toward digital ecosystems, and the banking industry needs to sort that out, Frazier states. The trend is only going to accelerate.

“We do a lot of thinking about alternative ways to solve problems by bringing in third parties.”
— Lisa Frazier, Wells Fargo

“We have to ask ourselves, ‘What is the future business model going forward?’” says Frazier. So far, Wells has moved further on platforms on the commercial side of its business than on the consumer side. Frazier speaks of how financial institutions can provide support for business clients beyond traditional banking products. This could include helping the company start up, operational support, payments, and more.

“We do a lot of thinking about alternative ways to solve problems by bringing in third parties,” Frazier states. The Wells Fargo Startup Accelerator, begun in 2014 by Frazier’s predecessor, Steve Ellis, plays a pivotal role in the process.

At the time of the interview Wells had about 25 companies in the Accelerator. These very early-stage companies are eligible to receive up to $1 million in funding, along with guidance from Wells Fargo business and technology leaders during a six-month program.

“It’s great for us to get exposed to these organizations, their culture and their solutions,” Frazier states. “And it’s also equally of value to these organizations to understand what it’s like to work with a big financial services company, and to get the detailed feedback which companies normally don’t share.”

Facebook launched its Libra cryptocurrency program about three months before Wells Fargo announced its plans to launch a pilot of Wells Fargo Cash, a digital currency powered by distributed ledger (blockchain) technology. The commotion over Libra may have helped keep the spotlight off the Wells pilot, although the two ventures are quite different. Wells Fargo Cash will be used to complete internal book transfers of cross-border payments within its global network, whereas Libra essentially would create a non-sovereign currency to be used by over a billion Facebook users.

( Read More: Why Beaten-Up Libra Digital Currency May Still Be a Threat to Banking )

Frazier’s group is overseeing the Wells crypto pilot and she believes it has great potential, mostly in commercial banking at this early stage for distributed ledger applications. Regarding consumer-facing applications like Libra, she says she doesn’t know where it’s going to end up or how or for whom.

“What problem are we trying to solve with it?” she asks.

Further, in the consumer space security is of utmost importance, she points out.

“I don’t think people should think about these technologies as happening overnight,” Frazier maintains. “These are going to be long, thoughtful conversations as we go forward.”

That said, the Wells exec also states that “We do believe that the technology takes out friction and reduces the cost to serve.” On the Wells Fargo Cash application, for example, final settlement will occur without the need for third parties, reducing transfer time and costs.

Reshaping How Branches Are Used

Wells Fargo currently has about 5,400 branches, according to a Bankrate analysis of FDIC data. That’s down from about 6,600 in 2010, but is still the most of any U.S. bank. The bank’s Innovation Group is not involved in the discussions about the number of branches to keep open, Frazier states, but is very much involved in helping to think through the branch experience between consumers and branch staff.

“The future of the physical experience will be a collaboration of humans – powered by data and AI – and machines to do things we never thought were possible before.”
— Lisa Frazier, Wells Fargo

Looking forward, the executive states that “fundamentally we have to think about a hybrid model of digitally enabled humans.” That is, retaining and enhancing the creativity of humans plus using AI and machines to create something greater than what is currently possible.

“The future of the physical experience,” Frazier explains, “whether that’s in the branches or over video or by some other means will be a collaboration of humans, powered by data and AI, and machines to do things we never thought were possible before. That is where I think we have to focus, and that’s where I think we should be when we think about the future of the physical space.”