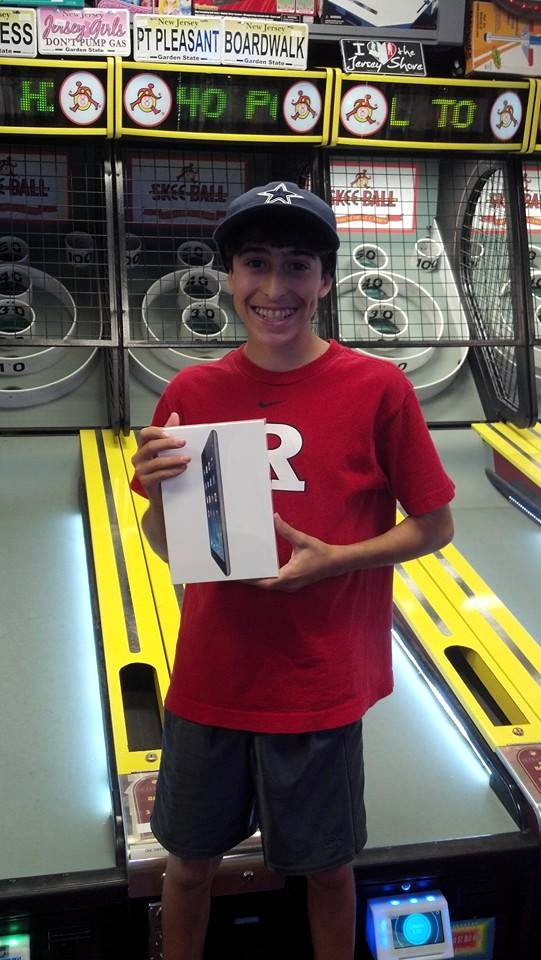 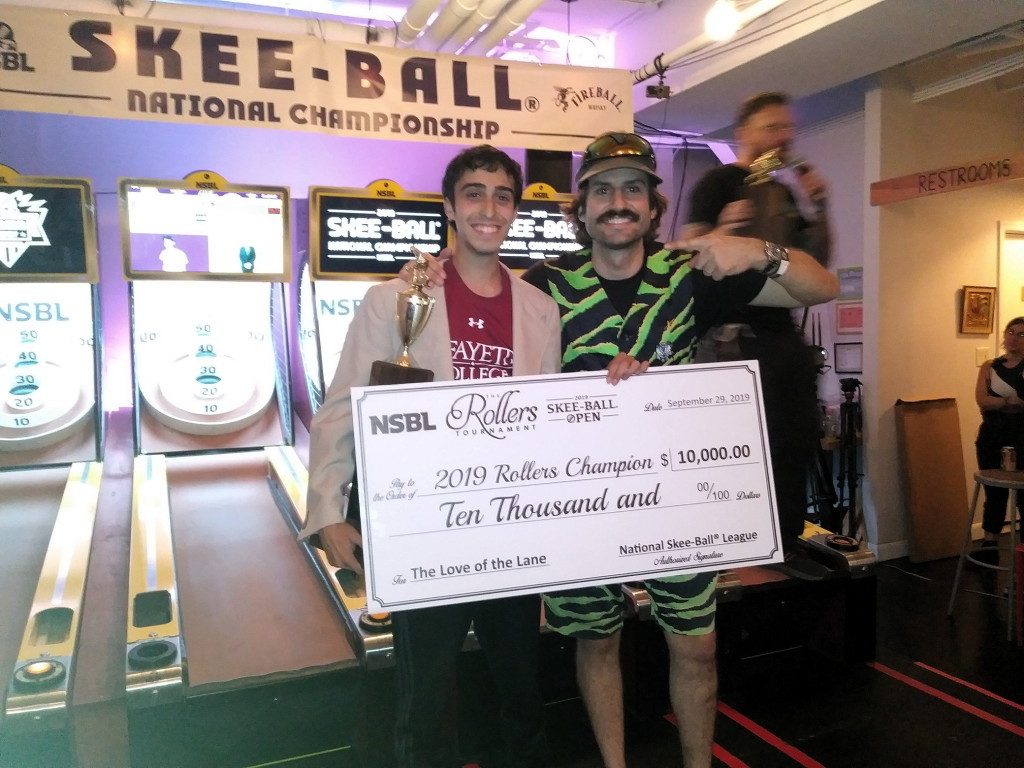 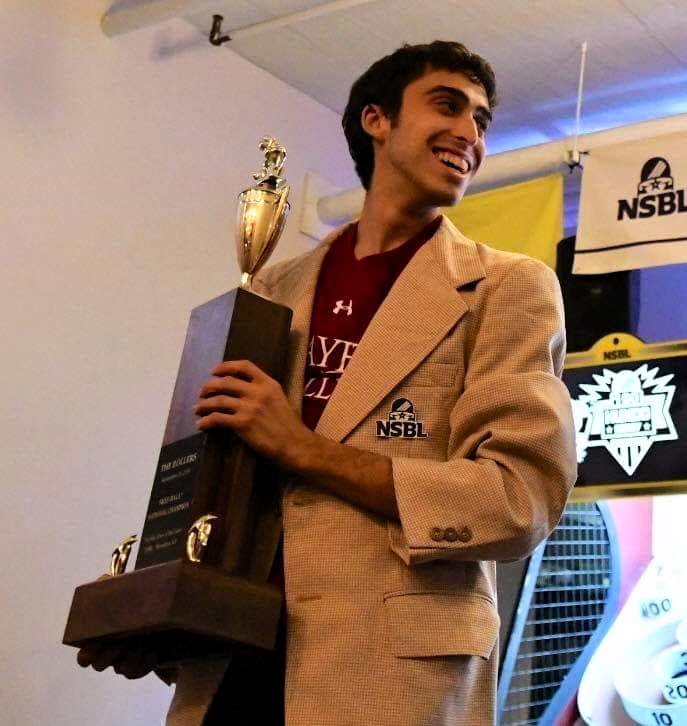 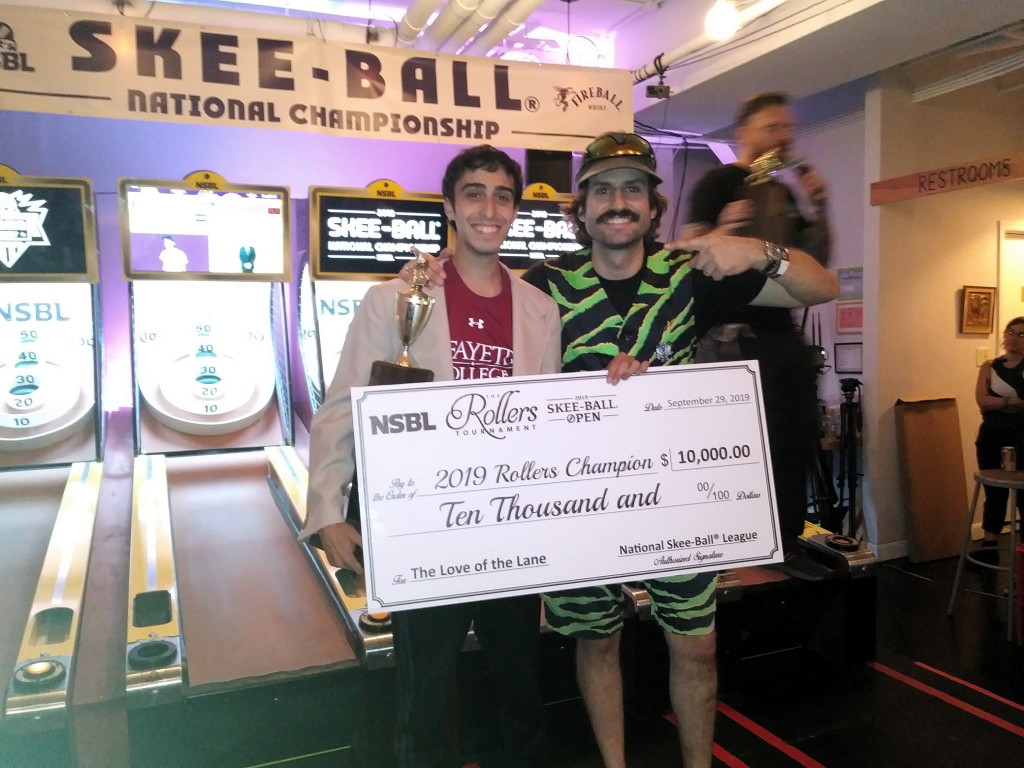 EDISON – Out of all the arcade games available, something attracted Elan Footerman, of Edison, to the game of Skee-Ball during his summer vacation trips to the Jenkinson’s boardwalk in Point Pleasant with his family.

He started playing Skee-Ball when he was around six years old. With $5 from his parents to play any arcade game he would like, he almost always chose Skee-Ball “because I liked playing it and it was one of the cheapest games in the arcade, so I could play a lot for $5,” he recalled.

Skee-Ball is played by rolling a ball up an inclined lane and over a “ball-hop” hump that jumps the ball into bullseye rings. The object of the game is to collect as many points as possible by having the ball fall into holes in the rings which have progressively increasing point values.

Nearly 250 players from 16 cities, including Cologne, Germany, competed in the qualifier for the 32 tournament spots and ultimately for the cream jacket and top prize of $10,000 in the National Skee-Ball League (NSBL). Footerman, now known as the Skee-Ball Kid, came into the championship as the overall No. 3 seed after the qualification round, according to Eric Pavony, Skee-E-O of NSBL.

The only tournament requirement was a player had to be at least 21 years old. Luckily for Footerman, he had turned 21 two weeks prior to the beginning of the tournament qualification. After an exciting phone call with his father, Footerman registered for the 2019 Skee-Ball Open and the rest is history.

The championship was held at Full Circle Bar in Williamsburg, Brooklyn. Footerman said he had never before played in an NSBL sanctioned 10-frame match on Skee-Ball’s biggest stage, with the bright lights, the raucous crowd and hundreds more watching his every ball online via the Twitch live stream.

“Coming into the championship match I was pretty nervous,” Footerman said. “I knew that my opponent Joey the Cat was very good and very consistent, so if I didn’t play my best I wouldn’t even have a shot of winning. ”

“I was very nervous leading up to the match that I wouldn’t be able to hit enough 100s in the game to keep up with Joey the Cat’s consistent average of around 400 points going for the 50s,” he said. “During the practice before the match started I was able to find a way to get around the bump on the lane by throwing all the way from the right side of the lane across to the left hundred, which eased my nerves a bit. At that point I knew that I just needed to play my best and that if I did I would have a very good chance of winning.”

Footerman beat rollers from Brooklyn, Oakland and San Francisco on his way to winning the distinctive jacket and title of No. 1 Skee-Ball player in the world. He won the final match 415 to 408, just a 7-point margin, after Joey the Cat failed to sink a 100-point shot on the very last ball.

The final frame in the match came down to Joey’s last ball, and he needed to sink a 100 to win it, Footerman said.

“I turned away as he went to throw his last ball because the pressure was too much for me to watch,” he said. “When I turned back around I saw the last ball bounce off the wall of the machine and roll into the 10-point pocket.”

“I grabbed my mom, dad, and Maya, my sister, closed my eyes and just screamed and jumped,” he said. “It really felt like a dream. It was also extremely gratifying to be able to prove that I was able to handle the pressure of being up there on the big stage and perform when it mattered most, something a lot of people doubted of a 21-year-old kid who was new to the scene.”

Footerman usually plays and practices at the same arcade on the Jenkinson’s boardwalk he grew up playing in as a child for one to two hours perfecting his Skee-Ball game. During the summer his family typically stays with his grandparents at their beach house in Point Pleasant for two to three days each week.

He noted when Superstorm Sandy hit the Jersey Shore in 2012, his favorite arcade suffered a lot of damage and they had no choice but to rebuild the arcade.

“When they finally refinished the arcade they had added brand new Skee-Ball machines with a jackpot of 300 points,” he said. “I started playing a lot at that arcade and I realized that if I went for the 40-point pocket I was able to get the jackpot every couple of games. The more I played, the better I got and sure enough by the end of the summer I had saved up enough tickets from the jackpots to get myself an iPad Mini.”

From there, Footerman first started competing in tournaments three years ago when his family was vacationing in Wildwood and his dad came across a sign “World Championship Skee-Ball Tournament” at an arcade, Ed’s Funcade.

Footerman said he is hoping to use some of his recent winnings to purchase a Skee-Ball machine for his home in Edison so he and his sister can play when they are not down the shore.

The National Skee-Ball League was created in 2017 as a way to bring the sport of Skee-Ball to more people and more places. Currently, NSBL is in the process of finalizing a custom product called Skee-Ball LIVE “the lane of the future” built specifically for competitive and tournament play that will allow Skee-Ball lovers anywhere around the world to connect, compete, win cash prizes and rewards.