Costly comments: Pension plans have pulled at least $1.3 billion from Fisher Investments, after an industry conference where Chief Executive Ken Fisher compared prospecting for clients to trying to get in a woman’s pants. The Iowa Public Employees Retirement System was the fourth public pension plan in a week to cut ties with the money manager, following funds run for Boston, Philadelphia and the state of Michigan. CNBC shared audio of some of the crass comments in a video posted here. “I really felt like it unsettled the room,” one of the conference attendees, Rachel Robasciotti, CEO of Robasciotti & Philipson, told CNBC. 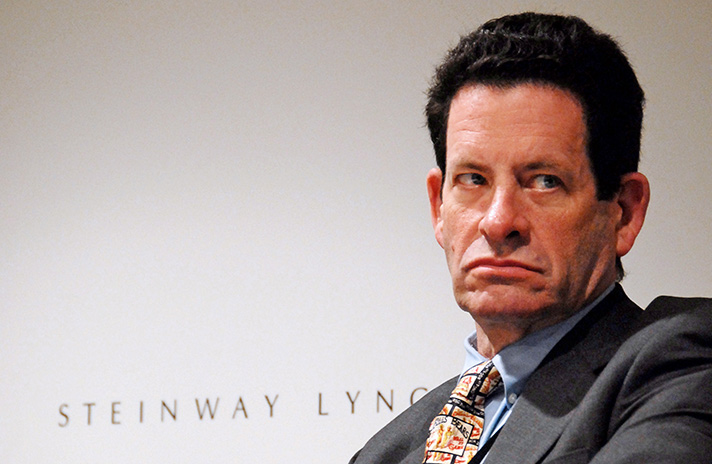 Oh, baby: BBVA has started offering loans for in vitro fertilization treatments. It created the loans through a partnership with the fertility analytics firm Univfy. Studies show that two-thirds of Americans don’t have health insurance that pays for IVF, and while 7 million women struggle with infertility, less than 3% get IVF treatments, with the cost being one of the biggest barriers, according to Dr. Mylene Yao, co-founder and CEO of Univfy. BBVA is offering the loans through IVF clinics, in amounts ranging from $2,000 to $35,000. When a patient is approved for a loan, BBVA pays the clinic directly for the treatment.

Niche thinking: Ellevest CEO Sallie Krawcheck has started an impact investment platform targeting high-net-worth women in the entertainment sector. The service allows each user to select companies for their portfolios based on their personal interests, ranging from sustainable business practices to LGBT causes.“As we engaged with women, particularly women on the West Coast in entertainment, they told us they are tired of doing business with companies that haven’t supported them,” Krawcheck told Variety. “They’re tired of investing in companies that don’t have practices that support women.”

Getting there: Standard Chartered is on track to achieve its goal of having women in 30% of its senior leadership roles by the end of next year, Simon Cooper, its CEO of corporate, commercial and institutional banking, said in this Bloomberg video. The ratio is at 27.7% now, up from 25.7% a few years ago.

Better at banking?: If a bank has more female leaders, will its risk and remuneration committees be run differently? A Financial Times editorial suggests it might be possible to quantify this as more women enter the senior ranks. “Board minutes ought to reveal whether women are more or less likely to challenge management,” Brooke Masters wrote in her op-ed. “We should then be able to link those results to banks’ performance in the long term.”

As part of the annual Most Powerful Women in Banking and Finance program, we recognized five companies for the contributions of female executives to overall performance and for going above and beyond in different ways to foster greater equity for women.

Citigroup — The megabank took a big risk this year by disclosing its unadjusted gender pay gap, showing the median pay for women at the company is 71% of the median pay for men. Citi was the only one of 11 major financial services and technology firms targeted by activist shareholder Arjuna Capital to reveal its raw numbers. To hold itself accountable for improving, Citi also publicly announced specific goals for increasing female representation in higher-paying jobs. Citigroup CEO Michael Corbat shared some of his thinking on this issue at the Most Powerful Women gala, as shown in this video clip.

U.S. Bancorp — Mentoring relationships don’t have to be all that formal to be successful, as illustrated by the executives at U.S. Bancorp. “When there is a culture of support for women, mentoring can be a marathon relationship, but there can also be tremendous value in the quick sprints,” said Reba Dominski, the company’s chief social responsibility officer, who shared her experience with interceding to help a young colleague get a promotion. To create more opportunities for such informal mentoring, Mary Martuscelli, the western U.S. president for private wealth management, created a group for women in financial services in the Phoenix area in part to give advice to women looking for a midcareer change. The initiative has been so successful she is now looking to extend it to universities to reach younger women before they decide on a career field.

BMO Financial — The company recently turbocharged a meet-and-greet program in which some of its directors are introduced to rising stars in the ranks. Expanding the decade-old program beyond senior executives has allowed more women at BMO to get exposure to the board. BMO said 65% of the leaders who participated in a Leaders Meet Directors event earlier this year were women.

Zions Bancorp. — Zions recently changed its diversity policies to better accommodate employees who felt left out of the decision-making process at headquarters. The Salt Lake City-based company set up a framework where each of its 12 regions has a diversity, equity and inclusion representative. Shelly Johnson, a senior manager for finance and strategy at Zions, said the framework will allow employees to initiate their own development programming tailored to their specific market.

Centric Financial — The female power duo running this Pennsylvania community bank knows how to raise money and attract diversity. Centric’s CEO Patricia Husic, along with its CFO Sandra Schultz, helped raise more than $69 million in capital after setting out to bring in $21 million last year. The $785 million-asset bank, which has an emphasis on the small-business segment, is on a growth trajectory with the goal of reaching $1 billion by 2020. Part of that growth includes hiring more women as senior executives as well as expanding its female customer base. Of its new accounts opened last year, 43% were opened by women, Centric said.

Did you miss the Most Powerful Women gala? Check out these video clips for key takeaways from the speeches. The newest video also shows scenes from the evening along with a sampling of the red carpet interviews.

“Bravery is a skill,” Cathy Bessant, the chief operations and technology officer at Bank of America, told the crowd. “There’s no way to be resilient without learning it.” See Bessant’s video here.

LeeAnne Linderman said she was uncomfortable early on with the idea of being “powerful” because it is a word with some negative connotations. But Linderman, a lifetime achievement honoree who had been part of the rankings before she retired from Zions Bancorp., said she came to understand that power can be a force for good and urged other women not to take as long as she did to embrace it. See Linderman’s video here.

Some of the more than 800 banking executives attending the gala — including KeyCorp’s Beth Mooney and Cape Cod Five Cents Savings’ Dorothy Savarese — stopped on the red carpet to share some thoughts on the importance of male allies. Here’s what they had to say.

MUFG Union Bank has promoted Elaine Genevro to head of branch banking. She had been the regional president for Northern California and the Pacific Northwest for the last four years. In her new role she oversees more than 350 branches throughout California, Oregon and Washington.

Germany’s second-largest bank, Commerzbank AG, has announced that Bettina Orlopp will become its chief financial officer no later than March 31. She will succeed Stephan Engels, who is leaving to become the CFO at Danske Bank A/S. Orlopp currently runs Commerzbank’s compliance, human resources and legal departments.

Barclays has added Dawn Fitzpatrick, the chief investment officer of Soros Fund Management, to its board of directors. Fitzpatrick, who previously worked at UBS, has appeared on our list of the Most Powerful Women in Finance. Barclays said it also plans to add one other director, Mohamed El-Erian, the former CEO of the bond fund giant Pimco, on Jan. 1.

The broken rung on the career ladder: Forget the glass ceiling. It’s far earlier in women’s careers when they fall dramatically behind men in promotions — at the very first management position. Though men and women enter the workforce in about equal numbers, men outnumber women nearly 2-to-1 when they reach that first step up into manager jobs, which are the bridge to more senior leadership roles. This article on the Women in the Workplace study conducted by Lean In and McKinsey has plenty of interesting stats and analysis. It also has details on programs meant to help women advance at Synchrony, where 46% of the managers are women, and Bank of America, where 40% of the managers are women.

An economics milestone: Esther Duflo is just the second woman — and at 46, the youngest person ever — to win a Nobel Prize in economics. She shared the award with two fellow researchers, Abhijit Banerjee, who is her husband, and Michael Kremer, for their experiments testing ways to alleviate poverty. “Showing that it is possible for a woman to succeed and be recognized for success I hope is going to inspire many, many other women to continue working and many other men to give them the respect that they deserve like every single human being,” Duflo said. Op-eds arguing that the recognition is a step forward for gender equality in the economics sector popped up in the The Guardian and Forbes.

Yellow card for #EqualPay: A referee penalized a Vermont high school girl’s soccer team with yellow cards after four players lifted up their jerseys to display #EqualPay T-shirts underneath during a game Friday, the Burlington Free Press reported. Now their story is going viral and they have more than 1,000 T-shirt orders. The girls said they were inspired by the U.S. Soccer Women’s National Team to take up the cause. “It’s appalling, and it’s ridiculous that that’s still a thing,” Burlington High School varsity soccer player Maggie Barlow told WPTZ. The T-shirts cost $25, but men are invited to pay an additional 16% ($4) as a way to highlight the gender wage gap. Brandi Chastain, a member of the women’s soccer team and an Olympic and World Cup winner, tweeted her support on Saturday.

Thank you @bhsgirlssoccer for standing up, celebrating and taking your jerseys off for #equalpay Proud of you! #rolemodels https://t.co/rgO3O6Ncfu