The next Elizabeth Warren? How Katie Porter is shaking up House banking panel  American Banker

WASHINGTON — Rep. Katie Porter is less recognizable nationally than other progressive Democrats elected to the House in 2018. But among watchers of the Financial Services Committee, she has become perhaps the fiercest disruptor in Congress since Elizabeth Warren.

The California Democrat has quickly found the spotlight in her first year on the panel, winning admirers who see her as a champion for the consumer as well as critics who view her more as a troublemaker.

Porter’s trademark is her sharp, critical questioning of Trump-appointed regulators and big-bank CEOs, often accompanied with visual aids and other media. Her combative style is applauded by other progressives who are new to Congress, but it has also ruffled the feathers of Republicans and even some Democrats.

“There is no one that fights harder for consumer protection in my estimation than Katie Porter,” said Rep. Ayanna Pressley, D-Mass., who along with Rep. Alexandria Ocasio-Cortez, D-N.Y., and Rep. Rashida Tlaib, D-Mich., sits on the banking panel and is part of “The Squad,” a high-profile group of four progressives (not including Porter) elected in 2018.

“She’s been a tremendous partner on the committee, but also she’s a leader,” Pressley said. “She’s someone we look to and someone that I see as a litmus test on these issues.” 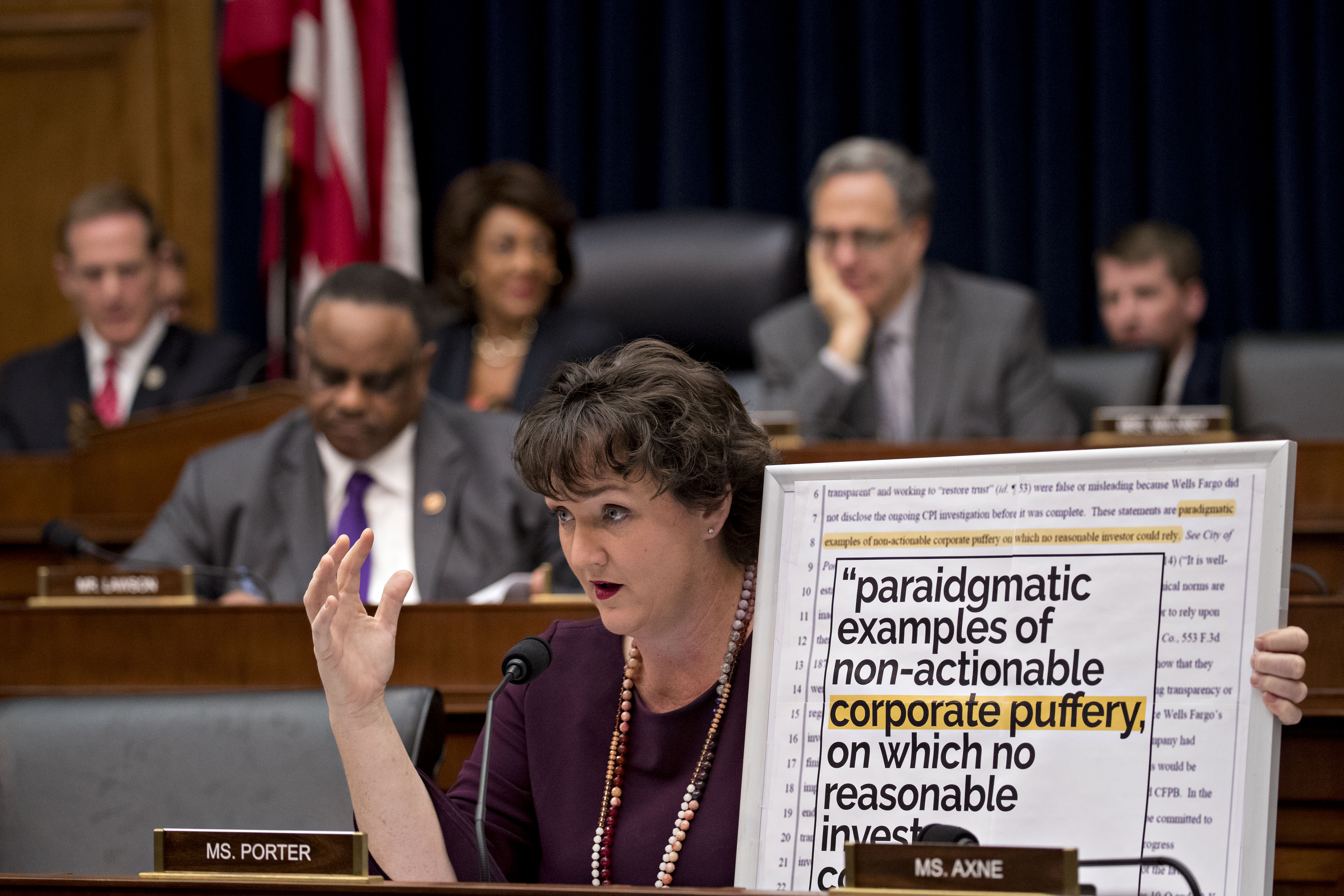 But to some, Porter’s approach at hearings — particularly her use of poster board, academic textbooks and other aids to make her point — is off-putting and even runs afoul of House rules. Some financial services insiders also privately claim Porter mischaracterizes industry practices.

The congresswoman says she is trying to draw attention to an issue that is non-partisan: the plight of consumers dealing with financial services providers that do not face adequate regulation.

“I would just point out that in all my years as a consumer advocate, and in two and a half years of running and representing a majority Republican district, I have never had an American — Republican, Democrat, Independent, voter, nonvoter, young, old, any race, any religion — I have never had anybody say that they like to be cheated,” Porter, a former law student of Warren’s at Harvard and the first Democrat ever elected in her Orange County district, said in an interview.

“So I would just tell them that I think the American people understand that they when they go out to buy a car, or they’re going to purchase their first home, or they’re struggling to pay off their credit card debt, they want to know that there are rules and they expect those rules to be followed.”

Porter came to Congress with a history as a consumer advocate. In 2007, with the mortgage bubble close to bursting, Porter wrote about how mortgage servicers often charged inaccurate fees, lacked documentation and frequently did not comply with bankruptcy law.

She later was tapped as California’s independent mortgage monitor from 2012 to 2014, overseeing $18 billion in relief to consumers. Before coming to Congress, she taught at the University of California, Irvine School of Law.

“She’s wicked smart, and she’s one of those unusual people who both has deep substantive knowledge but also can relate to ordinary people and convey issues in a way that people can get them,” said Lauren Saunders, associate director at the National Consumer Law Center.

“She is in that select group of members that you absolutely want to prepare for. You would not want your regulator to get blindsided by her questions,” said Edward Mills, a policy analyst at Raymond James. “She is the new star of the House Financial Services Committee who most people have not yet heard about. … People pay attention to ‘The Squad,’ but she is arguably the most feared freshman on the committee.”

Paul Merski, group executive vice president for congressional relations and strategy at the Independent Community Bankers of America, said that bankers “absolutely” need to be prepared for Porter’s questions.

But critics find her approach too extreme and claim her views aren’t always backed up with data about how financial institutions are operating.

One observer, who spoke on the condition of anonymity, said Porter’s style of questioning is “well received” on social media but is “definitely not built to promote a dialogue.”

An industry source, who also did not want to be named, said that while Porter is “very smart … it does seem that she has some opinions about our industry.”

“We wish she would consider taking into consideration some more facts about how we have an impact on the economy including in her district,” the person said.

Warren, the Massachusetts senator and Democratic presidential candidate, is a fan, however. She credited Porter for “holding the Trump administration and the big banks accountable for scams that hurt working people.”

“The people of California’s 45th Congressional District have one of the toughest fighters I know working for them in Washington D.C., and it’s an honor to stand shoulder to shoulder with her,” Warren said in a statement to American Banker.

But in some cases, her use of mixed media during her hearings has drawn criticism.

At a September hearing, Porter pulled out a poster board with a grid of common arguments made by debt collector advocates — she referred to it as “debt collection bingo” — but Republican members of the House Financial Services Committee raised a point of order calling for her to remove the prop.

Even though the poster was cleared to be shown on a video screen in the hearing room, Porter had not been cleared to use the actual board. She put the board down at the order of Financial Services Committee Chairwoman Maxine Waters.

Waters later told Porter to stop playing a clip from her phone of a movie, “Maxed Out,” in which a debt collector talks about walking consumers out to the end of a plank.

“The Chair was not advised of any attempt to present in any shape, form, or fashion, statements, testimony, or question by something other than her voice,” Waters said at the September hearing. “Will the gentlelady please refrain from disrupting this committee?”

It was not the first time Porter had drawn the ire of others on the committee. At an April hearing with CEOs of the largest banks, Porter used a whiteboard to question JPMorgan Chase CEO Jamie Dimon. She was trying to illustrate a point about compensation for low-level employees of the bank.

Rep. Patrick McHenry, R-N.C., raised a parliamentary inquiry objecting to the use of the white board. “Just want to understand because I’ve been on the committee for 15 years and this is not something I’ve seen,” he said at the time.

Waters appeared to agree that Porter had not followed proper procedure. “This sign should have been presented to … so that all members can see,” the chairwoman said.

Even though she has been asked by committee leaders to refrain from using props at hearings, Porter said the visuals aren’t going away.

Pressley said she runs “into people all the time, who quote a data point that Congresswoman Porter lifted up at a presentation.”

“There is certainly tremendous value added in that,” Pressley said.

One of Porter’s main priorities has been defending the CFPB, an agency born out of the 2010 Dodd-Frank Act that has been scorned by congressional Republicans.

Porter said she plans to continue holding the bureau accountable. She notes that Kathy Kraninger, a Trump appointee, has “no expertise and no experience” in consumer finance. The CFPB has so far this year issued 20 enforcement actions, with investigations down 70% in the changeover from Democratic to Republican leadership.

“We’ve seen that she’s not trying to dismantle the agency in a sort of obvious way,” Porter said of Kraninger, drawing a contrast with former acting CFPB Director Mick Mulvaney. “The question and concern I have is, is in more subtle ways trying to undermine the bureau’s efficacy?”

But Porter hasn’t just targeted Kraninger. She has also raised concerns about CFPB Innovation Office Director Paul Watkins’ role at the agency. She joined Warren and Pressley in a letter to the agency questioning Watkins’ role given his prior work at Alliance Defending Freedom, which has been designated by the Southern Poverty Law Center as an anti-LGBTQ hate group.

At a June hearing, Watkins told Porter that he was not involved in ADF’s advocacy and that he would continue to uphold the CFPB’s policies. But Porter said she and her staff will continue to watch Watkins in his role and ensure he is committed to nondiscrimination.

“Discrimination is a sign of a broken market,” Porter said. “But I think this also raises an important point about confidence in these institutions. And so someone with a background who has been part of a hate group … I think it’s hard to ask the American people to believe that those laws are being and are going to be consistently enforced when we’ve got someone in that role who has that kind of background.

A CFPB spokesperson declined to comment for this story.

Porter said as both parties are trying to achieve a healthy economy, consumer debt needs to be part of the conversation.

The stock market and unemployment “are valid indicators, but they are not the only ones,” she said. “What’s happening to wage growth? What is happening to families’ ability to save and the consumer debt load that they’re carrying?”

While Republicans have attacked policies laid out by Warren and other progressives as socialist, Porter calls herself a “champion for capitalism.”

As the 2020 presidential election gears up, some have speculated that Porter could be a possible candidate to lead the CFPB if a Democrat wins the White House.

She would not say whether she is interested in the job but noted that she will continue to be engaged in consumer issues.

“So that’s a long ways from my radar, but I will say this: I’ve spent my career working on these issues because I think they are so important to our economy,” she said. “Those household economic decisions are really a bedrock part of our American economy and I am going to keep being interested in those issues no matter what role I’m in.”

— Kate Berry contributed to this article