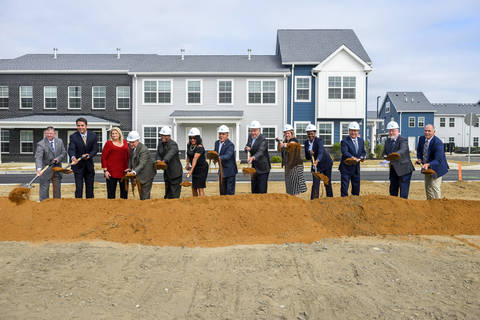 CAMDEN, NJ — Another step in revitalization efforts for the Centerville neighborhood came Tuesday as the Housing Authority of the City of Camden (HACC) and private-sector partner The Michaels Organization officially marked the next phase of the $120 million Clement T. Branch Village redevelopment effort.

Formally dedicated nearly 80 years ago, the village housing project was named for the prominent city health, civic, and educational leader Dr. Clement T. Branch, who became the first black member of the Camden Board of Education.

You have successfully signed up for the TAPinto Camden Newsletter.

All 75 townhomes as part of this next phase will remain 100% affordable, serving households earning less than 80% of the area median income for Camden.

“Embarking on the next phase of Branch Village Townhomes has been incredibly exciting for all residents of Camden’s Centerville neighborhood,” Moran said. “The project is yet another example of how Camden is bringing prosperity to all of its neighborhoods.”

The next phase will include 16 one-bedroom, 28 two-bedroom, and 31 three-bedroom apartment homes. Each apartment will have a full kitchen, living and dining areas, full baths, and generous bedrooms with ample closet space, as well as efficient Energy Star-rated heating and cooling systems and appliances.

Branch Village management and social services will be conducted in a community building constructed in 2014 and will be expanded as part of the effort to include a commercial kitchen and spacious dining facility. The 3,000 square-foot facility also includes a large multi-purpose room, various management suites, and a computer center for residents.

“Rebuilding the city’s housing stock is vital to the transformation of Camden and to improve the quality of life for residents, which has been underscored by the redevelopment of Branch Village,” Cappelli said. “The finished product of the first phase of this project stands in stark contrast to the antiquated apartments that stood here previously, and I’m proud to join with my partners in the city to usher in the next phase of new affordable housing for this community.”

Branch Village Townhomes II, like the Branches at Centerville Apartments which opened in December 2017, are funded in part by a CHOICE Neighborhoods Implementation Grant. The comprehensive program administered by the U.S. Department of Housing and Urban Development (HUD) supports community redevelopment plans with a focus on three priorities: housing, people, and neighborhoods.

In 2016, HUD awarded a $13.2 million grant to HACC as the lead recipient and the City of Camden as the co-recipient for the revitalization of the Mt. Ephraim South Corridor. Of that funding total, $1.5 million was made available for the development of Branch Village Townhomes II.

Some $220 million will have been invested in the revitalization of Centerville by the time all phases of the Clement T. Branch Village project are completed.

“We’re so proud to partner with HACC in bringing high-quality affordable housing to Camden families and helping to strengthen the Centerville neighborhood,” said Nicholas Cangelosi, vice president of Michaels Development. “Without the inspired leadership of the Housing Authority, the vision of the city’s political leadership, and the incredible partnerships we have formed with local community groups, stakeholders, and residents, none of this would have been possible.”

In addition to the $1.5 million in Choice Neighborhoods grant funds, financing for the $21.5 million development includes $16.2 million of private equity raised through the sale of federal Low-Income Housing Tax Credits (LIHTC), awarded by the New Jersey Housing and Mortgage Finance Agency. TD Bank invested in the tax credits, which were syndicated by Riverside Capital. TD Bank is also providing a construction loan of $16.1 million and Berkadia Commercial Mortgage is providing a $5.14 million permanent loan.