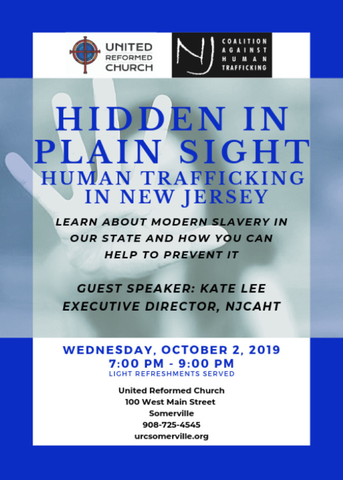 The presentation is free and open to anyone who would like to attend and learn more about the issue of modern-day slavery in New Jersey and how to help prevent it.  Human Trafficking is a form of modern-day slavery, where people use force, fraudulent promises or extortion to control and exploit others for a profit.

New Jersey is a hub for human trafficking, which is the fastest growing crime internationally. Densely populated with access to many forms of transportation, the Garden State is ideal for human trafficking to hide in plain sight, since most people don’t recognize it when they see it.

You have successfully signed up for the TAPinto Hillsborough Newsletter.

One of the greatest weapons to combat trafficking is the average citizen, which is why education and raising awareness is key to ending trafficking altogether.

“The realities of human trafficking are not like the movies,” Lee said. Her talk will include what modern-day slavery looks like.

“It shocks many to learn that the majority of victims of human trafficking in New Jersey and around the country are US citizens. Although there are foreign-born victims, brought to this country for forced labor or sexual exploitation, over 80 percent of all victims are American, and most are victims of sex trafficking,” Lee said.

The NJCAHT works to serve as the hub of community efforts statewide to increase coordination and visibility of NJ’s commitment to end human trafficking. The coalition co-sponsors numerous events annually and has many committees, including education, legislative, arts, healthcare and slave-free commerce. More information about human trafficking in New Jersey is on the website: njhumantrafficking.org