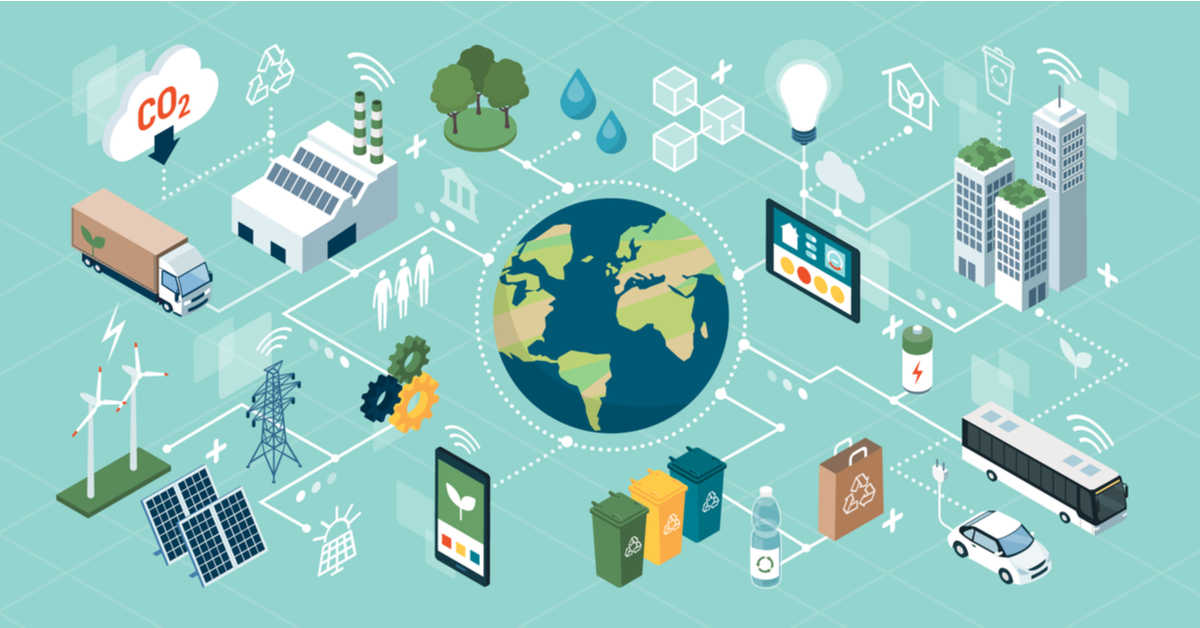 During 2019’s Climate Week, companies, foundations and others have made dozens of announcements of commitments, partnerships, new research and more to address the climate crisis.

As GreenBiz published last week, the commitments this year are much bigger — think trillions — than those announced during previous Climate Weeks.

For example, during the U.N. General Assembly, 130 banks from 49 countries — with more than $47 trillion in assets — launched The Principles for Responsible Banking. Backed by the United Nations, the effort from one-third of the global banking sector, commits the banks to “strategically align their business with the goals of the Paris Agreement on Climate Change and the U.N. Sustainable Development Goals” in addition to “massively scale up their contribution to the achievement of both.”

More than 85 major companies announced that they would adjust their businesses with what scientists say is needed to limit the worst impacts of climate change.

Post-Climate Week and second round of Global Climate Strikes, here’s other news to know. This list is curated and not inclusive of every announcement made during this year’s Climate Week.

The Bill and Melinda Gates Foundation, the World Bank and several governments — including the Netherlands, Switzerland and Germany — announced a $790 million commitment for assistance to over 300 million small-scale food producers who are facing more droughts, flooding and extreme weather because of climate change.

Andrew Forrest, an Australian billionaire and founder of the philanthropic Minderoo Foundation, donated $300 million to create an alliance of U.S.-based Fortune 500 firms who will agree to pay a voluntary levy that would help to end plastic pollution. The release said the levy will raise more than $20 billion annually from fossil fuel-based plastics, according to conservative estimates, and it will “help keep plastics in the supply chain but out of the environment.” The Guardian reported that if a company agrees to the levy, it would pay $200 to $5,000 per metric ton of plastic that it uses, determined by how difficult the plastic is to recycle. Additionally, the levy would not apply to recycled plastics.

Money raised from the levy will be used to encourage consumers to recycle plastic bottles and bags by increasing the value of returning them, to lower the cost of recycling by building an infrastructure that can handle it and to fund cleaning up bodies of water that are polluted with plastics, according to the alliance.

Kering, which manages the development of Gucci, Saint Laurent, Balenciaga, and other renowned fashion houses, announced its entire group will become carbon neutral within its own operations and across its entire supply chain. This follows an earlier September announcement that Gucci would commit to going carbon neutral.

Amazon, with social and environmental change enterprise Global Optimism, announced “The Climate Pledge” and provided more clarity around its climate action strategy, ordering 100,000 electric delivery vehicles from electric truck startup Rivian and making a commitment to meet the Paris Climate Agreement objectives a decade earlier than the agreement’s 2050 goal. Additionally, the corporation asked other companies to sign on.

A vast global scale-up is still needed to deliver on the Paris Agreement and limit a global temperature rise to 1.5 degrees Celsius.

More than 85 major companies announced that they would adjust their businesses including both their operations and value chains with what scientists say is needed to limit the worst impacts of climate change. Each one plans to set science-based goals based on the Science Based Targets initiative, which independently evaluates and approves companies’ targets.

One of those companies, Schneider Electric (PDF), said it will step up its commitment to carbon neutrality by taking three actions. First, it plans to reach carbon neutrality in its extended ecosystem by 2025, five years sooner than its original 2030 goal. It also plans to work with its suppliers to get to a net-zero supply chain by 2050.

The World Bank, Tesco and Sodexo pledged to halve food loss and reduce food waste by 2030. Each had its own plans for how to meet the goals. First, the World Bank committed over $1 billion to sustainable development bonds to combat food loss and waste. Second, Tesco, a British multinational grocery retailer, called on other food retail and hospitality companies to report their food waste as it started doing in 2013. Third, Sodexo renewed its $1.4 billion line of credit that makes a pricing adjustment based on how the company is moving toward its goal to prevent 50 percent of the food waste and food losses from its operations by 2025.

The Climate Group shared that this year’s Climate Week NYC has been its busiest yet, with more than 20 new commitments on cleaner, smarter energy. “But a vast global scale-up is still needed to deliver on the Paris Agreement and limit a global temperature rise to 1.5 degrees Celsius,” the group said in a statement.

Restaurants, hospitals, hotels, universities and cities — including IKEA, city of Milan, Harvard University, Seattle Children’s Hospital and the World Bank — announced that they are joining the World Resource Institute’s Cool Food Pledge, first launched in fall 2018 at the Global Climate Action Summit in San Francisco. Its aim is to reduce the climate impacts of food. According to the announcement, collectively, the signatories serve over 800 million meals each year, and they all plan to cut their greenhouse gas emissions by 25 percent by 2030.

More than a dozen companies including Barry Callebaut, L’Oreal and Unilever joined the One Planet Business for Biodiversity coalition, an effort to protect and restore biodiversity and the companies’ respective supply chains and product portfolios. The commitment comes at a time where, according to the U.N. report on biodiversity earlier this year, 1 million species are at risk of extinction and urgent action is needed.

The World Economic Forum, the Global Maritime Forum and Friends of Ocean Action — which together represent leaders from the maritime, energy, infrastructure and finance sectors — launched the Getting to Zero Coalition. The coalition’s goal is to decarbonize the international ocean shipping sector by 2030. Green shipping has stalled in the past because of the difficulty of international collaboration and high costs of necessary technology.

HP partnered with World Wildlife Fund to restore 200,000 acres of forests and contribute $11 million to conservation efforts. During the five-year partnership, the organizations plan to restore a portion of Brazil’s Atlantic Forest and increase sustainable management of some state-owned farms and forest plantations in China.

The scale of the necessary low-carbon transition is unprecedented and will span all sectors and geographies.

During Advertising Week New York, which happens to coincide with Climate Week, advertising and tech companies including Facebook, Twitter, Droga5 and Nielsen Holdings have committed to increase the public’s knowledge about the climate crisis and the urgency to respond to it.

“The most talented communicators in the country have pledged to tackle the challenge of rallying the public to accept the climate threat and move to solve it in the time we have left,” John Marshall, chairman of Potential Energy Coalition, said in a press release.

Leading up to Climate Week, on Sept. 18, the Climate Finance Leadership Initiative released Financing the Low Carbon Future. The report, according to the press release, draws on the “direct perspective of some of the world’s largest institutions across the investment chain, including private banks, asset managers and asset owners,” including Allianz Global Investors, AXA, Enel, Goldman Sachs, Japan’s Government Pension Investment Fund (GPIF), HSBC and Macquarie. And the analysis concludes that financing the low-carbon transition will require strategic partnerships. “The scale of the necessary low-carbon transition is unprecedented and will span all sectors and geographies,” it reads.

Climate Bonds Initiative released a similar missive focused on Latin America and the Caribbean. The report, sponsored by the U.N. Development Programme, analyzes green finance in the regions. It found that “green bond growth is expected across the region, driven by much needed investments in green infrastructure.”

The Coalition for Urban Transitions’ Climate Emergency, Urban Opportunity report examines the critical role national governments must play to achieve equitable and sustainable economic development in cities, “which are home to over half the world’s population and which produce 80 percent of gross domestic product and three-quarters of carbon emissions.”

The report found that investing in a bundle of low-carbon measures in cities could reduce emissions from cities by 90 percent by 2050 and collectively would generate an economic return of almost $24 trillion, by today’s estimates. Among the coalition’s six overarching priorities (PDF) for low-carbon measures were to align national policies behind clean cities, to coordinate and support climate action in cities and proactively plan for a just urban transition. It says the latter should include anticipating the needs of fossil fuel-based workers and industries and developing transition plans for them.

The consequences of not reaching that goal are so threatening to life on this planet that we cannot even contemplate the possibility of failure.

Watchdog group NonprofitWatch.net released a report that details the sums that corporate oil and gas companies — Exxon, Shell, Chevron and BP — have donated to environmental organizations including the Nature Conservancy, Conservation International and World Resources Institute.

In a new analysis, the Ellen MacArthur Foundation and Material Economics, a management consultancy firm, demonstrate the need to widen the focus of climate change solutions to include the circular economy. It says the current laser-focus on renewable energy is not enough.

“Switching to renewable energy plays a vital role in addressing climate change, but this alone will not be enough. In order to achieve targets on climate, it is critical that we transform how we design, make and use products, and food,” Dame Ellen MacArthur, founder of the Ellen MacArthur Foundation, said in a release.

“This paper shows that transitioning to a circular economy is not only an opportunity to tackle emissions across sectors, but to design an economy that is restorative and regenerative, creating benefits for society, businesses and the environment,” MacArthur added.

On par with the assessment that companies are not doing enough to address the climate crisis, the United Nations Global Compact and Accenture released a study called The Decade to Deliver: A Call to Business Action that found 21 percent of chief executives believe business is playing a critical role in contributing to reaching the Sustainable Development Goals adopted by all United Nations Member States in 2015. Additionally, 48 percent “are integrating sustainability into their business operations.”

As Climate Week winds down and people travel back to their offices and homes, it’s time to get to work. Between now and their respective deadlines, companies, foundations and others will need to take all necessary steps to deliver on their commitments. Many pledges are huge ones that will require groups to break them down into smaller short-term goals and milestones. And it will be challenging to reach the targets without attentiveness, persistence and consistency.

During 2020’s Climate Week, companies should provide transparent updates on how they’re tracking on toward their goals to address the climate crisis — where they are excelling and how can they improve their practices.

At the start of Climate Week, Global Optimism’s Christina Figueres published a New York Times op-ed aimed at the fossil fuel industry but really, every sector should heed her words.

“The global economy must reach net-zero emissions by 2050 at the latest. This is not a dream or an ideology. It is an imperative,” Figueres wrote. “The consequences of not reaching that goal are so threatening to life on this planet that we cannot even contemplate the possibility of failure.”