Karen Larrimer is saying “no” more often. Wearied by unending demands on her time and concerned for women facing the same challenges, she decided to establish firmer boundaries.

“I’ve taken myself off some boards and been upfront about my time limitations and priorities,” said Larrimer, who oversees retail banking for the $406 billion-asset PNC Financial.

“When I was invited to chair a particular organization, I laid out conditions before I accepted,” Larrimer added. “No 7:30 a.m. meetings because I’m taking my kids to school. Limitations on how many events I need to attend because I need to prioritize family time. … Guess what? They accepted.
“Why haven’t I been doing this all the time?” 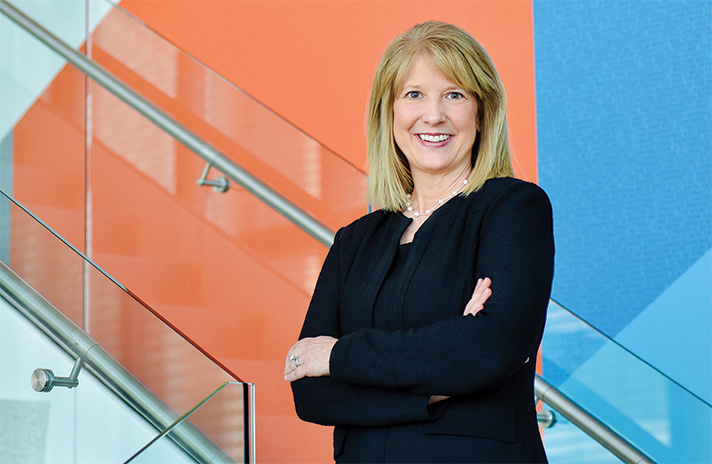 Now, Larrimer is encouraging other women, who she said frequently get caught up in trying to “do it all,” to think harder about prioritizing. “I tell them they can do it all — if they set and communicate appropriate boundaries and then enforce them.”

If the past year’s results are any measure, the new approach appears also to have contributed to a sharper on-the-job focus.

In October 2018, Larrimer presided over the launch of PNC’s national digital retail strategy. The plan offers customers outside the company’s traditional footprint a high-yield online savings account as well as an array of digital products supported by a limited number of branches in select markets, beginning with Kansas City and Dallas and expanding soon to Boston, Houston and Nashville.

The new branches are growing at five times the rate the company typically sees from a de novo office in its legacy footprint, according to Chairman and CEO William S. Demchak.

And with digital products assuming a higher profile at PNC, Larrimer devised a new approach to ensuring they’re fully stress-tested before bankwide adoption. Under Larrimer’s “Crawl, Walk, Jog, Run” process, products are tested first among a small group of friends and family, then a wider circle of pilot-testers and finally a larger group of bank customers, before the PNC-wide rollout.

“This gives us the opportunity to address any issues while we’re working within a small community of users, so that we limit the number of customers who might be inconvenienced,” Larrimer said.

“Crawl, Walk, Jog, Run” has since been adopted by the entire bank as a best practice, with teams using it whenever they launch a new product or change an established one.

As retail chief, Larrimer also played an integral role in the “outstanding” rating PNC received on its most recent Community Reinvestment Act exam in March. It earned the highest grade possible for lending, service and investment.

One outside project to which Larrimer didn’t say “no” was the Children’s Museum of Pittsburgh’s new $18.5 million Museum Lab. The Lab opened in April and offers middle-schoolers an opportunity to work hands on with everything from wood and metal to state-of-the-art 3-D printers. Larrimer chaired its capital campaign fund.

“People were generous and helped turn a beautiful ruin into an amazingly inspirational space,” Larrimer said of the Lab, which is housed in the 128-year-old Carnegie Free Library of Allegheny building on Pittsburgh’s North Side.