‘A double whammy’: CPAWS calls for more protection of biodiversity as a way to also fight climate change  CBC News 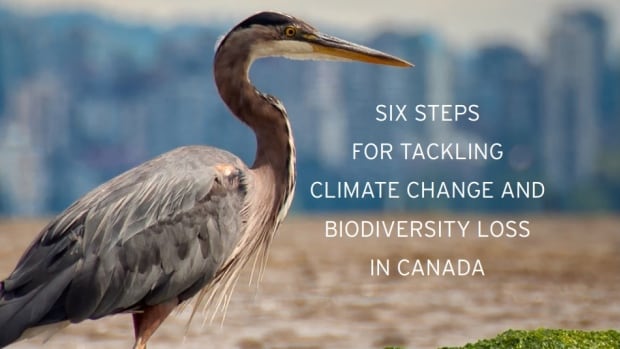 The Canadian Parks and Wilderness Society wants the federal government to pay more attention to protecting the country’s biodiversity — a goal it says dovetails with existing efforts to combat climate change.

“It’s kind of a double whammy,” said Florence Daviet with CPAWS, who was the lead author of a report released Thursday calling for a greater emphasis on the two goals, together.

Daviet said there are numerous human activities “that are directly impacting biodiversity and directly causing greenhouse gas emissions” and Canada needs a better plan to mitigate both types of environmental damage, simultaneously.

“While the Government of Canada has been taking action to reduce fossil fuel emissions, this part of the of the challenge they haven’t looked at as closely,” she said.

To that end, CPAWS is calling for a billion-dollar fund for projects that would protect ecosystems and plant and animal life while also reducing greenhouse gas emissions resulting from land-use change.

“Climate change and biodiversity loss are among the most pressing challenges the world faces,” the report reads.

The report adds that better management of Canada’s forests, grasslands, oceans and wetlands is “part of the climate change solution.”

“These ecosystems support our everyday wellbeing and, by their existence, have already absorbed greenhouse gas emissions and helped mitigate the impacts of climate change on Canadians. But they could do much more,” it reads.

Figuring out how to do that, the report cautions, “is not a simple task” and not all steps to protect natural habitats result in “legitimate win-win benefits” for both biodiversity protection and greenhouse-gas reduction.

CPAWS suggests the billion-dollar fund it is proposing could be used to support projects that offer the maximum benefit toward both goals.

Examples could include projects that would “prevent road development in wetlands and peatlands, or adapt farm activities or food management practices to reduce agricultural spread into grasslands and forests,” the report suggests.

“On a bigger scale, the fund could enable municipalities to work together to implement policies to protect and restore natural infrastructure in a watershed,” it reads. “To be effective and to provide meaningful results, these solutions should be implementable at a landscape scale and on a long-term basis.”

The report also recommends Canada identify specific actors responsible for emissions resulting from land-use change — something that is currently measured but only on a coarse, aggregate scale — and include these types of emissions under a carbon-pricing system.