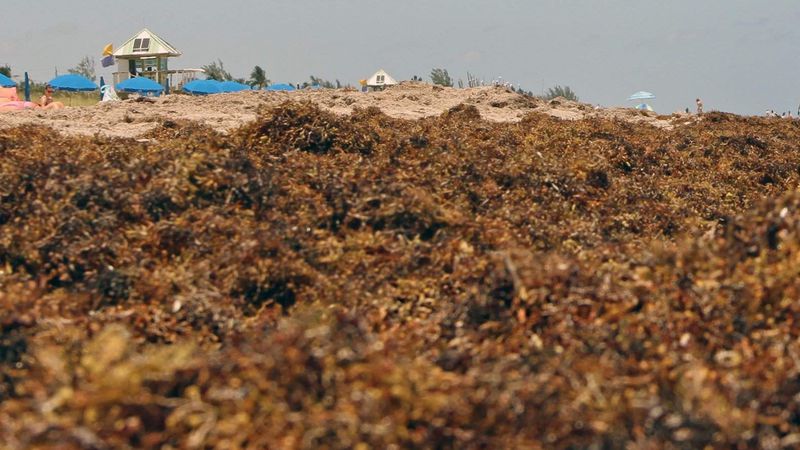 The piles of sargassum just keep getting taller on South Florida’s beaches, and the smell keeps getting worse. According to a new study led by scientists from the University of South Florida-St. Petersburg, everyone better get used to it.

By analyzing satellite imagery, Chuanmin Hu of the College of Marine Sciences and his colleagues found that, starting in 2011, the once-spotty growth of sargassum now regularly forms thick, sprawling mat that stretches across the surface of the Atlantic Ocean, a mat that they’re calling the Great Atlantic Sargassum Belt. Last year’s belt stretched from the west coast of Africa to the Caribbean Sea, which the scientists labeled “the biggest seaweed bloom in the world.”

“Based on the last 20 years of data, I can say that the belt is likely to be a new normal,” Hu said.

The study, just published in Science, found that the expansion of the sargassum coincides with two key events in the spring and summer. In the Amazon’s rain forest, the continued deforestation by farmers has led to an increase in the amount of nutrient pollution flowing out to sea from the Amazon River. Meanwhile a regular upwelling current from the ocean’s depths pushes nutrients that had been on the bottom up to the surface to further fuel the seaweed’s growth.

Sargassum is a naturally occurring plant floating in the Atlantic, growing in mats and patches here and there, particularly in the portion known as the Sargasso Sea. Although it doesn’t look like much, it provides essential habitat for sea turtles, crabs, fish and ocean-going birds. As an ecosystem, it’s so vital to the ocean’s health that acclaimed oceanographer Sylvia Earle, who grew up in Dunedin, has compared it to a golden rainforest.

Christopher Columbus was the first to report the seaweed floating in what became known as the Sargasso Sea. According to National Geographic, the sailors aboard Columbus’ Santa María found it to be less of a marvel and more of an obstruction, noting in their ship’s log that in some places it was “so thick that it actually held back the ships.” Later explorers noticed that the air bladders that keep it afloat resembled a type of grape called sargazo — hence the name.

In recent years it has become a major headache for beachgoers in Mexico and across the Caribbean as well as South Florida, with vast mats of the stuff washing ashore and filling the sea breezes with an eye-watering stench reminiscent of rotten eggs. Last year 20 million tons of it floated through the Atlantic, and when it died, it sank to the bottom where it smothered corals and sea grass beds.

Hu and his colleagues examined satellite images of the sargassum dating back to 2000 to see how the seaweed’s growth has changed to produce the belt. Prior to 2011, they saw that it primarily floated in patches around the Gulf of Mexico and the Atlantic. But starting in 2011, the mats became larger and thicker, spreading into areas where it had never been spotted before.

“The ocean’s chemistry must have changed in order for the blooms to get so out of hand,” Hu said. His team was able to correlate the explosion of sargassum with increases in the Amazon’s deforestation and also an increase in the use of fertilizer as farms supplant the rainforest.

Major blooms occurred every year between 2011 and 2018, except for one. In 2013, one of the ingredients for a big sargassum belt was missing. For some reason, the seeds left behind by the previous year’s growth weren’t as numerous as they had been in prior years.

And as the heaps of sargassum washed ashore in Florida, they produced headlines like this one from the Palm Beach Daily News in April: “Seaweed siege unusual during tourism season.” One hotel tried sending workers out every morning to gather up all the sargassum and bury it, but they spent all day working on that only to see more of the stuff float in the next day.

By calling this the “new normal,” Hu said he didn’t mean there would be bigger and bigger blooms every year. Instead, what he meant is that there’s no going back to the pre-2011 patterns of growth.

There are still aspects of the sargassum’s interactions with the ocean that need study, he said. For instance, the scientists do not know what, if any, role might be played by ocean acidification, which results from the world’s oceans soaking up more carbon dioxide than they can handle, which makes the water more acidic.

Ultimately, though, Hu said climate change is a major factor because it’s causing increased rainfall that then washes the excess nutrient pollution out to sea, fueling the growth of the sargassum.

And what can the beach communities of South Florida and other places do about the piles of putrid plants?

“There is no way to kill these naturally occurring blooms,” Hu said, “so the only way is to learn how to mitigate the impacts and how to adapt.”