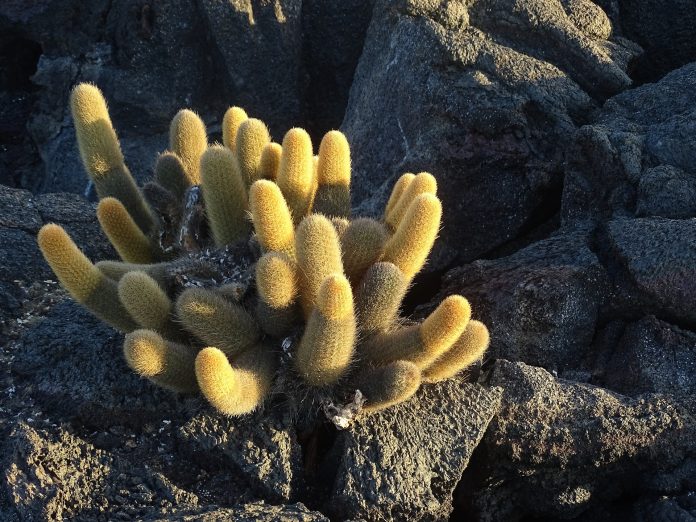 Flowers and all Fauna

The origin of the flora and fauna of the Galapagos has been of great interest to people ever since the publication of the “Voyage of the Beagle” by Charles Darwin in 1839. The islands constitute an almost unique example of how ecological, evolutionary and biogeographic processes influence the flora and fauna on both specific islands as well as the entire archipelago. Darwin’s finches, mockingbirds, land snails, giant tortoises and a number of plant and insect groups represent some of the best examples of adaptive radiation which still continues today. Likewise, the Marine Reserve, situated at the confluence of 3 major eastern Pacific currents and influenced by climatic phenomena such as El Niño, has had major evolutionary consequences and provides important clues about species evolution under changing conditions. The direct dependence on the sea for much of the island’s wildlife (e.g. seabirds, marine iguanas, sea lions) is abundantly evident and provides an inseparable link between the terrestrial and marine worlds.

The islands have relatively high species diversity for such young oceanic islands, and contain emblematic taxa such as giant tortoises and land iguanas, the most northerly species of penguin in the world, flightless cormorants as well as the historically important Darwin’s finches and Galapagos mockingbirds. Endemic flora such as the giant daisy trees Scalesia spp. and many other genera have also radiated on the islands, part of a native flora including about 500 vascular plant species of which about 180 are endemic. Examples of endemic and threatened species include 12 native terrestrial mammal species (11 endemic, with 10 threatened or extinct) and 36 reptile species (all endemic and most considered threatened or extinct), including the only marine iguana in the world. Likewise the marine fauna has an unusually high level of diversity and endemism, with 2,909 marine species identified with 18.2% endemism. High profile marine species include sharks, whale sharks, rays and cetaceans. The interactions between the marine and terrestrial biotas (e.g. sea lions, marine and terrestrial iguanas, and seabirds) are also exceptional. Recent exploration of deep sea communities continues to produce new additions to science.

There is a lot more information about these islands from UNESCO and many other sources. We can arrange visits as part of a cruise package, or as a separate tour package. Just be aware you cannot book a flight to a nearby country, or continent, then rent a boat and visit. It is not safe, it is illegal, and it could be decimating to this natural environment. Take a cruise or tour before it is gone.