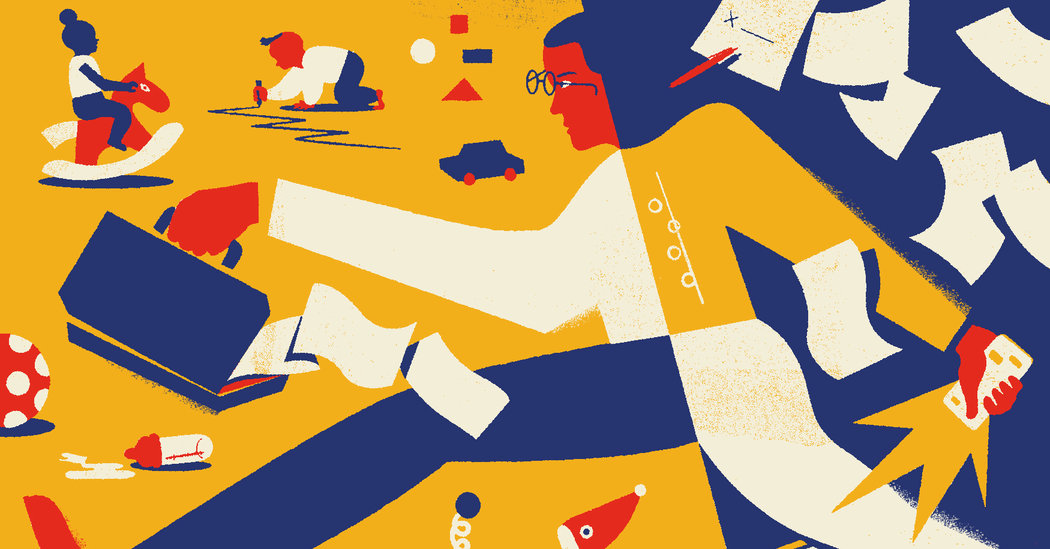 This story was originally published on June 11, 2019 in NYT Parenting.

In 2017, my family and I began an unintended experiment, testing the effects of paternity leave.

When my first son was born in 2012, I had only recently joined The New York Times and all I got off was the week of vacation I had stored up at the time.

Long after I returned to the office, I noticed little differences in the way I related to my second son that seemed most easily explained by the extra time I’d spent with him. To this day he regularly calls out for me in the night in a way that my first son rarely did. And when I am with him, I feel a certain intangible sense of ease that has only come more recently with my older son. This feeling of ease, along with my growing comfort with wrangling both kids at once, have had predictably positive effects on my wife, reducing her stress levels, and making us both happier.

While I’ve always been hesitant to attribute too many of the subsequent improvements in our family life to the parental leave I took in 2017, a growing body of research suggests that paternity leave does, in fact, have far broader effects than we might have anticipated, including some which endure years after the leave period itself.

Men Who Take Paternity Leave Are Less Likely to Get Divorced

Over the last two years, Richard Petts, a sociology professor at Ball State University, and Chris Knoester, a sociology professor at Ohio State University, have co-authored a series of papers, analyzing data from long-term surveys of thousands of American families. Their research demonstrates that paternity leave provides lasting benefits, not only to relationships between fathers and their children, but also to mothers and to relationships between the parents.

In their most recent paper, published in May 2019, Dr. Petts and Dr. Knoester found that, even nine years later, children whose fathers took at least two weeks of paternity leave after they were born reported feeling closer to their fathers than children with fathers who did not take leave. In research on married parents for a forthcoming paper, the sociologists found that even relatively short periods of paternity leave caused couples’ divorce risk to drop and to remain significantly lower for as many as six years to come, even as their children reached school age.

“The big news in the U.S. is that the boost is not just in the year or two after a child’s birth,” Dr. Petts told me. “It seems to be more sustained.”

This new work on American families builds on several earlier papers, mostly from Europe, where paternity leave is more common, which found that fathers are, in the long term, more likely to remain involved in parenting and to equitably divide household chores with their partners if they take time off after their children arrive. A recent study from Sweden found that mothers whose partners were offered flexible paid leave in the year after a child’s birth were less likely to need antibiotics and anti-anxiety medication.

Public enthusiasm for paternity leave has been growing: A 2016 Pew Research Center study found that nearly 70 percent of Americans support some form of paid leave for new fathers. There are signs of a rapid cultural shift as well. Though, in 2014, New York Mets second baseman Daniel Murphy faced widespread criticism for taking three days off for the birth of his son, just four years later, basketball player Dwayne Wade was showered with support when he missed six games following his daughter’s birth in 2018.

There are several reasons new fathers in the United States return to work so quickly, the most obvious being the lack of a national policy mandating paid leave for all workers. The Family and Medical Leave Act guarantees 12 weeks of unpaid parental leave, but its eligibility requirements are strict (to qualify, an employee must have worked at least 1250 hours during the 12 months before the start of the leave period, for an organization employing at least 50 people within a 75-mile radius), and many American workers do not meet them.

Even fewer American parents have access to paid family leave. Though six states — California, Rhode Island, New York, New Jersey, Washington and Massachusetts — as well as the District of Columbia have passed paid family leave laws, their provisions vary. A March 2018 national survey conducted by the Bureau of Labor Statistics found that only 16 percent of workers in the United States have access to some paid family leave through private-sector employers.

And research suggests that, even when fathers do gain access to paid parental leave, they may be reluctant to take it. After California’s paid family leave law, the first such law enacted in the United States, took effect in 2004, economists Charles L. Baum and Christopher Ruhm found that the percentage of men taking time off after a child’s birth rose only modestly; the average period of parental leave taken increased by nearly five weeks for mothers, but only two to three days for fathers.

“Men who take paternity leave do tend to be stigmatized and viewed as less committed employees,” said Rebecca Glauber, a professor of sociology at the University of New Hampshire.

How to Make Paternity Leave an American Norm

The successful expansion of paternity leave programs in other industrialized nations suggests that these cultural barriers can be overcome. Certain policies have been shown to be especially effective in encouraging men to take full advantage of paternity leave benefits. The adoption of a so-called “daddy quota,” for example — a use-it-or-lose-it period of paid leave earmarked for new fathers — has successfully boosted paternity leave participation rates in several Scandinavian countries. In 2006, in a departure from the rest of Canada, Quebec adopted a “daddy quota” similar to the Scandinavian model, offering five weeks of dedicated, non-transferable, government-paid leave to new fathers in the province.

Within two years, 75 percent of new fathers in Quebec were taking paternity leave, up from 22 percent before the use-it-or-lose-it “daddy quota” was implemented, according to research by Ankita Patnaik, an economist at Mathematica Policy Research in Washington, D.C.

Dr. Patnaik found that men in Quebec who’d taken the “daddy quota” continued to spend more time on household work, even one to three years after completing their paternity leave. Further, Dr. Patnaik’s research found, these fathers’ increased participation in household tasks appeared to free up their children’s mothers to pursue their own professional ambitions. One to three years after childbirth, mothers in Quebec whose partners had taken the “daddy quota” were working an hour longer per day, on average, and were 7 percent more likely to be employed full-time, Dr. Patnaik found.

Richard Petts, the Ball State University sociologist who researches the impact of paternity leave on American families, said that he did not find solid evidence that paternity leave boosts mothers’ careers, but that may simply be because American fathers take much shorter paternity leaves than their Canadian counterparts.

For my part, I came out of my own paternity leave with an easy ability to take both of the kids as soon as I was done at work, or to handle sick days when they came up. That allowed my wife to transition back to her own job more quickly, and to commit with more confidence to new projects. We are both still as overwhelmed as most other parents of little kids, but at least we feel like we’re muddling through it together.

Nathaniel Popper is a San Francisco-based technology reporter for The New York Times.