Oversold Lithium could be about to rally  Green Car Congress

by Alex Kimani for Oilprice.com.

It’s been a decade of lows for commodities after posting 7 declines in 11 years, but we’ve seriously underestimated lithium. It’s back with a vengeance in 2019.

The commodities market endured yet another annus horribilis, with just four commodities—natural gas, uranium, cocoa and wheat—recording any uptick at all. Last year’s 12 percent slide by the Bloomberg Commodity Index—spurred by 20 percent-plus declines by industrial bellwethers like West Texas Intermediate crude, steel and platinum—came in the wake of two years of modest gains.

Viewed against that kind of backdrop, lithium’s 50 percent correction that snapped a multi-year winning streak appears less vicious. It’s important to remember that prior to the crash, lithium had enjoyed a meteoric rise with prices doubling since the beginning of 2016 and nearly quadrupling over the past decade. The fact that much of the rally coincided with a sharp rise in the value of the U.S. dollar makes it all the more remarkable.

Investing in the commodity market can be a roller-coaster ride; what with the incessant boom-and-bust cycles driven by the ebb and flow in infrastructural spending, production ramps/cutbacks and stockpiling/destocking supplies. And just like other financial markets, trader sentiment plays a big role in determining trajectories.

Unfortunately, it’s the latter scenario that took center-stage during last year’s lithium crash. A furor around anticipated new supply especially from China’s new hard-rock projects and Chilean brine mines got out whack and derailed the market. 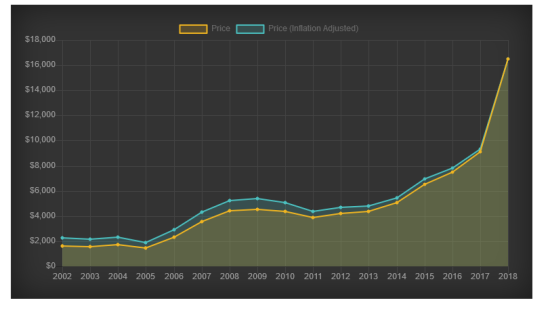 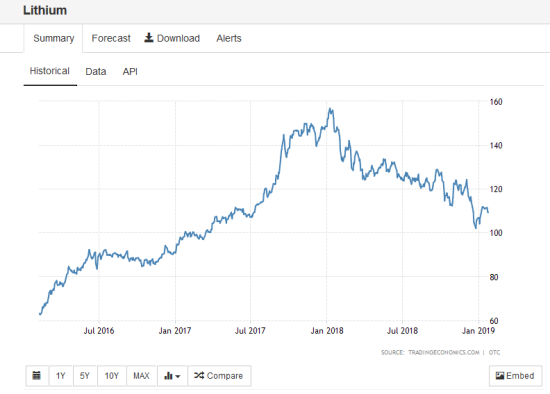 Shares of major lithium producers and explorers including Sociedad Química y Minera de Chile (NYSE:SQM), Albemarle Corp. (NYSE:ALB) and Orocobre Ltd (ASX:ORE) received a severe hammering in March after Morgan Stanley forecast that Chilean low cost brine producers could add as much as 200kt per year by 2025, while expansion of China’s and Australia’s hard-rock mines could pump in another half a million metric tonnes over the timeframe. That’s certainly a massive production ramp-up considering that global production in 2017 totaled just over 200kt.

In August, Macquarie Research provided the final straw after chiming in with a warning that the market was “sleepwalking into a tsunami of oversupply.” 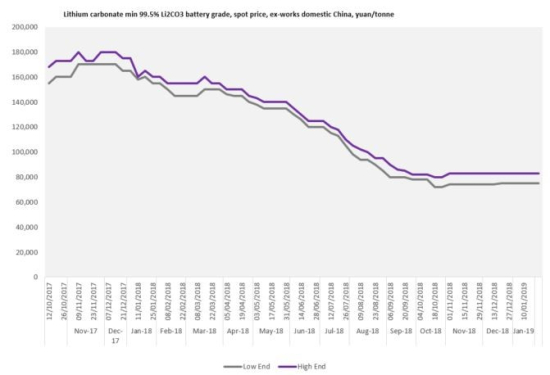 But maybe the bear camp rushed their fences this time…

While it’s undeniable that the carnage managed to exceed even Morgan Stanley’s decidedly pessimistic outlook for global lithium prices to drop 45 percent by 2021, the fundamentals suggest that the selloff was greatly overdone and such low prices cannot be justified by simple market forces of supply and demand.

According to London-based Benchmark Minerals Intelligence senior analyst Andrew Miller, the disconnect between lithium prices and the demand side of the equation has never been bigger.

A cross-section of materials experts have raised eyebrows at the negative assessment, criticizing the investment analysts for underestimating the rise in lithium demand and the complex nature of lithium mining and production ramps. According to them, both MS and Macquarie failed to account for just how big the gap between supply forecast and actual production can be.

Supply expansions in 2018 came in much lower than predicted and the tsunami of oversupply forecast by the likes of Macquarie Research proved to be little more than changing tides in the lithium supply chain.

A good case in point is Brisbane-based Orocobre, which has become the poster child for just how challenging new brine mining can be. The company’s Salar de Olaroz project in Argentina took seven years to hit its stride but still came up short of production targets. Meanwhile, run-ins with the courts and regulators coupled with mutual accusations of license violations facing Chile’s lithium giants SQM and Albemarle at their Atacama brine projects further reinforce this point.

The screenshot below from Orocobre’s investor slide presentation is a sobering reminder to this reality. 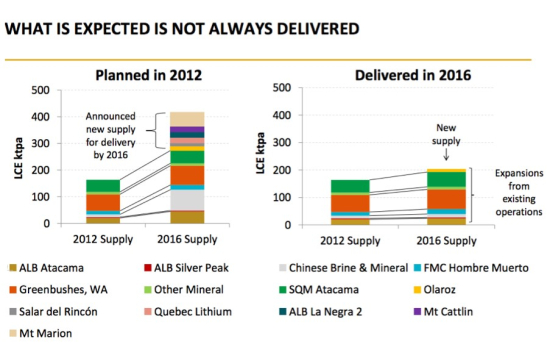 In terms of feedstock supply, SQM and Albemarle had laid out plans for increased production rates. But as is often the case with brine evaporation, the process has been hindered by seemingly endless production delays. SQM hit technical obstacles at its new brine conversion facilities that delayed its target capacity of 70,000 tpa LCE by end of 2018 while Albemarle continues to struggle to achieve full capacity at La Negra II.

The situation has not been much better in China—the ultimate lynchpin to the lithium bear thesis. Many Chinese brine producers in the Qinghai region had outlined plans to triple or quadruple capacities over the coming 3-4 years. A visit by Benchmark Minerals to these operations, however, has painted a dire picture—the technical challenges related to high magnesium concentrations in the region are nowhere near being comprehensively overcome. Across Qinghai’s 10 producers, only an additional 5,000-10,000 tonnes of lithium product found its way to the market, majority of which failed to reach technical grade specifications. This, in effect, means that much of what came online from the region was either reprocessed thus adding to costs or converted to lithium hydroxide in a bid to meet growing demand for nickel-rich cathode technologies.

Although tight credit in China forced some lithium buyers to destock and contributed to the glut, the predicted huge oversupply failed to materialize. Around mid-September, analysts at CRU estimated lithium surplus for 2018 at a relatively mild 22,000 tonnes against a demand of 277,000 tonnes. 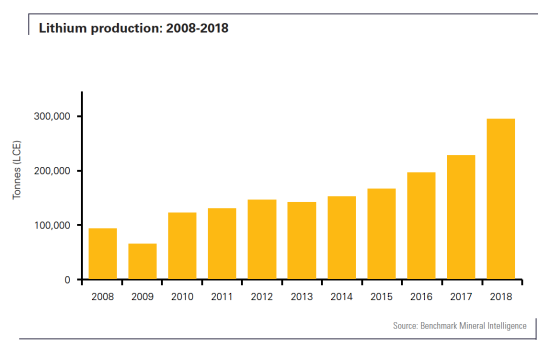 So far, there is no clear data or evidence that that the lithium demand narrative is about to slowdown, let alone reverse. On the contrary, certain emerging trends in the industry suggest just the opposite.

The biggest near-term driver for lithium demand is the NCM trend. The shift towards cathodes that use huge amounts of lithium hydroxide is already underway, something that is expected to trigger a huge NCM (nickel-cobalt-manganese) ramp up. Benchmark Minerals estimates that 44 percent of mega-and-giga-factories will use lithium as a raw material by 2028 translating into 534,000 tonnes of additional demand.

That projection seems to resonate with Elon Musk’s ambitious target to build 20 gigafactories across the globe over the next decade. Miller sees 2019 as the tipping point where demand will eventually outstrip supply starting 2020.

Meanwhile, Roskill has predicted that the shift to higher-nickel-cathode materials will push many lithium producers to favor production of lithium hydroxide over lithium carbonate thus taking some pressure off the lithium carbonate supply side. The firm has forecast lithium demand to expand by a brisk 21 percent annual clip between 2018 and 2025 with demand expected to grow 13.5 percent in the current year.

But, of course, no lithium bull thesis would be complete without the EV angle.

Currently, the EV market accounts for about 47 percent of global lithium demand. That, however, is expected to drastically change as EV penetration rates coupled with the ongoing trend of electric vehicles using larger battery packs that yield longer ranges leading to electric mobility gobbling up 83 percent of lithium supply by 2027.

Fastmarkets has predicted EV penetration to hit 15 percent by 2025 from 2 percent currently. EV demand has actually been beating estimates and is constantly being revised upwards to reflect this. The EV explosion is expected to drive a nearly six-fold increase in lithium demand for the forecast period. 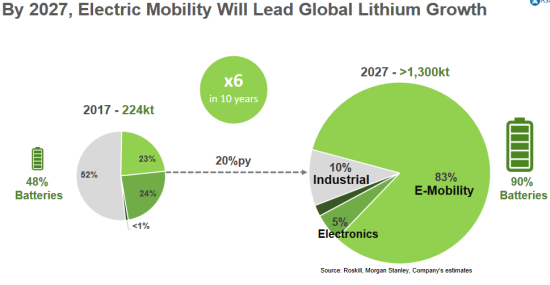 Key lithium trends to watch in 2019 and beyond

Miller advises investors to keep an eye on new spodumene production, particularly how quickly it can be integrated into the chemical and converter supply chain and turned into either lithium carbonate or hydroxide. A slower ramp is likely to lead to supply constraints and raise prices and vice-versa.